Start Time: 01:29 End Time: 06:44
2020 came to an end and DaGman has gave his end of year round up vlog. He's constructed a best XI for 2020, also mentioning his choices for Best Manager, Goal Keeper, Defender, Midfielder, Striker and Goal.
Category: Sports & Adventure Soccer
Publish Date: Jul 03, 2021
Snipped By:
Share
station description The pitch is where we eat, sleep & talk!!! 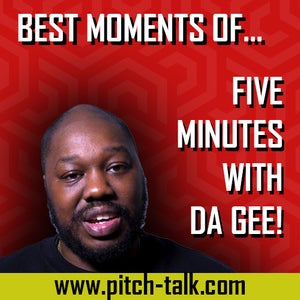 Best moments of Five Minutes With Da Gee!
45:32 7/3/21 11 audios
Up Next
Full Description
Back to Top
2020 came to an end and DaGman has gave his end of year round up vlog. He's constructed a best XI for 2020, also mentioning his choices for Best Manager, Goal Keeper, Defender, Midfielder, Striker and Goal.
Transcripts
Back to Top
into this topic of this week, which is the best of 2020, it's just me recap in 20 20, looking at the best team, best players, best goal sort of thing. So you know what, just to get started, get right into this because I You know, I don't want to make this for too long because I know you people want to get out there and start partying, celebrate 2021, So yeah, let's start off with the best team and I'm gonna start with goalkeeper goalkeeper, I'm gonna say Allison Bekoff Liverpool, definitely one of the best goalkeepers in the Premier League, you know, he's formidable at um keeping clean sheets but not just that, you can tell how good a goalkeeper is when he's missing and when he's missing, Liverpool tend to do um start leaking goals and when he's back in he's a plug on the left of defense, I'm gonna go Andy Robinson for Liverpool and the Nebraska, I'm gonna go trend Alexander Arnold, both of them formidable fullbacks. Um Not only are they decent offenders but they are incredible attacking players as well and they help with providing support for the midfield and providing assists for for the goals, so every team needs those sort of players and when you've got them, you know it just makes your team I look better centrally. I'm gonna go for Virgil van back I think without question, you know, he's one of the best defense central defenders in the Premier League at the moment, he's injured, which you know, has taken a couple of months of his 2020, but even with the months that he's been missing, he's still one of the best and considered one of the best in the league alongside him, I would have corner Cody, who I think has had a great breakthrough international year. Um You know, he's just built on from the season before and he's broken into the England team, scored his first England goal. Um You know he's even captain the England team as well and you know he's going from strength to strength and he's part of this rules team who you know they play a very exciting and um incredible football at times and he is a linchpin in a spokesperson and a great influence on that team. So Connor Coady definitely alongside Virgil Van Dyke, I'm gonna play free man midfield and I'm gonna go with Jordan Henderson, there might be some Scots there because in the past I've absolutely ridiculed Jordan Henderson, especially from the fact that you know his sampling days and whatnot, I never assumed that you go on to be a Liverpool Champions League winning League winning captain, he'll be supported by Fernandez of Manchester United. Now I can't look past this player, he's had a great impact, you know, a bit of a nasty player in my eyes but you know sometimes you know sometimes you need that sort of player but you know, bar the nasty side um you know, he's got great attributes and you know, his his goals um that he scored from a United have been important but not just his goals, his his contributions to goals I think He's laughing, he's contributed to like 32 goals um since he's been at Midnight and he scored about 18 of those or you know, assisted 14, that's just fantastic in itself. So definitely Fernandez, Kevin the brand without doubt. Again, Uh he's level one par with Fernandez, there's not much to expand on their kevin, the brains kevin brand, excellent player. A bit of a surprise here for many, a bit of a bias here for me, but I'm going back to Osaka again, he broke through a couple of seasons ago. Um, and then since then he's just been getting stronger and stronger and stronger from game to game and you know, he's a delight to watch and he's a, he's a really important player to Oslo at the moment, Kyra circles alongside money. Um one of the best in the Premier League in my ass, he's so such a fun player to what he, some of the stuff that he does and he tries and you know, it's it's just man lost for words like money is fantastic and he's a potent goal scorer as well. James body basically is just a monster of a Straka. Uh I do not know what to say about James body, I thought his smoke would have died out ages ago, but he just came from strength to strength season to season, you know, always amongst them in the top goalscorers, you know, and he's just been listed as top goalscorer um for the last three or four seasons. James James body is uh, an absolute beast of a pair. So that is my
Up Next
Popular Playlists
Best Yoga Podcasts: Listen & Learn New Poses Sour Shoe's Greatest Moments on The Howard Stern Show Listen to: Top 15 Funniest Barack Obama Quotes 9 Game Design Podcasts Every Game Designer Needs to Hear 7 Podcast Episodes About The Golden State Killer That Will Keep You Up at Night David Parker Ray & Shocking Audio of the Toy Box Killer You Need to Hear Best UFO Podcasts That Will Abduct Your Mind Controversial Joe Rogan Experience Episodes Audio Wack Packer Beetlejuice Best Moments on The Howard Stern Show Best NoSleep Podcast Episodes To Terrify You Sexy ASMR Audio to Turn You On
Popular Categories
ASMR Business & Tech Cannabis Fashion & Beauty Gaming History Home & Garden Kids & Family Spirituality Travel
Add to playlist
New playlist