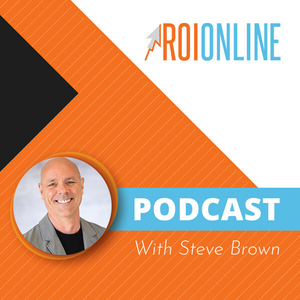 Four Ways To Bring Specificity To Your Business | Part 1

From Audio: [Special Episode] The Mindstate Marketing Hour #27 with Will Leach - The ROI Online Podcast Ep. 113

Start Time: 10:34 End Time: 13:45
Will Leach and Steve Brown talks about the first part to bringing specificity to your business, which is, to be specific with your tasks and calendar.

The ROI Online Podcast
Jump to Full Description Transcript
Playlists that Four Ways To Bring Specificity To Your Business | Part 1 appears on.

There are currently no playlists containing this audio.
Add this audio track to one of your playlists
Add to Playlist
Up Next
Full Description
Back to Top
Will Leach and Steve Brown talks about the first part to bringing specificity to your business, which is, to be specific with your tasks and calendar.

Transcripts
Back to Top
So So you have on here. There are four ways to bring specificity to your business. So I guess we're gonna go for number one. A a couple of ideas I had here. Right? So one of the things that I have received in the article I started, you know, I have a daily tasks list, right? I'm sure you guys do to. Lots of people have their checklists. Um, I use teams and and Microsoft. So I have my checklist on that and an outlook. And I started looking at the tasks that I have, and I noticed that I don't really have consistency in my tasks. And so after reading this journal article, I started thinking about, you know, some of my some of my tasks were legitimately I had create new modules for my master class. So you guys know I've been working on a master class to help small businesses be able to apply behavioral psychology, too. Their business. It's a video based course. And so I have some new module ideas that I want to incorporate into the master class. And so I looked at that. I said, Well, how specific is that? And I've been noticing. Honestly, this Steve is that I haven't been working a lot on it lately. Like I have other things that keep coming up. You know that I keep kind of pushing this master class in these new modules away, so I think to myself, Well, maybe the lack of specificity is making it feel like it's a bit too daunting. So I literally rewrote and I said, rather than saying, create new modules for the master class I wrote record your marketing audit and blueprint presentation. And because of that, that specificity. Now I'm hoping, anyways, is that that that specificity okay, it's not just creating a module, it's now I've got to do to recordings are gonna take me a half hour piece, and I actually have those documents already read. I just have to record myself doing those things, and I thought to myself, there it feels easier to 30 minute presentations. I do 30 minute presentations all the time. That feels a little bit easier than create two new modules in the master class, so it's now starting to rank higher up on my list of priorities because it feels simpler to do. It's not that it's not that it's more important. Less important, it's just simpler to do. Therefore, I'll probably do it tomorrow because that's when I do my simplest things on Fridays, right? The paying invoices, uh, paying invoices, sending out invoices, doing recordings because they feel easy on Friday. That's interesting. So sometimes when you say, like, create new module, it's nebulous and it seems like a lot of work. But when you were talking about that example is going through my head that it makes it like a small thing when at first it was this big giant monster. Yeah, it's just semantics, right? It's just a little psychological trick, but, uh, and be kind of what I was thinking about it. I didn't simplify it into multiple small tasks. It's the same thing, right? It's still the same thing. Record these modules. So you know, a lot of times people say, Well, you got to take up these big ideas and break them up, and I'm totally for that, by the way. But now that I'm thinking about this article, is it because these are simple series of small tasks and or is because when we break up something large like film modules into small tasks. It feels more specific, small and specific, and that leads us psychologically. To say that's a simpler, easier thing to do. Therefore I'll do it. So it's kind of a neat trick I'm gonna start playing around with.
Up Next
Popular Playlists
Best Yoga Podcasts: Listen & Learn New Poses Sour Shoe's Greatest Moments on The Howard Stern Show Listen to: Top 15 Funniest Barack Obama Quotes 9 Game Design Podcasts Every Game Designer Needs to Hear 7 Podcast Episodes About The Golden State Killer That Will Keep You Up at Night David Parker Ray & Shocking Audio of the Toy Box Killer You Need to Hear Podcasts About UFO & Aliens That Will Abduct Your Mind Audio Cheat Sheet To The Sexy Liberal Podcast Network Controversial Joe Rogan Experience Episodes Audio Wack Packer Beetlejuice Best Moments on The Howard Stern Show 12 Best Episodes of the NoSleep Podcast to Keep You Up at Night
Popular Categories
ASMR Business & Tech Cannabis Fashion & Beauty Gaming History Home & Garden Kids & Family Spirituality Travel
Add to playlist
New playlist