Your changes have been saved
All Audio Finding Fertile Ground Podcast 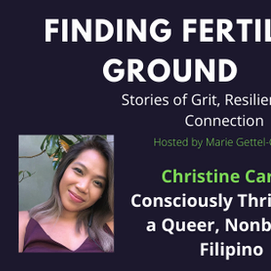 Start Time: 21:34 End Time: 25:18
Christine Carino (she/her/siya) is a queer nonbinary immigrant from the Philippines who now works as a transformation coach to help underrepresented leaders reconnect with their authentic selves. She briefly speaks on her own experience being nonbinary and the Tagalog gender-neutral pronoun siya.
Category: Society & Culture
Publish Date: Jun 01, 2021
Snipped By:
Share 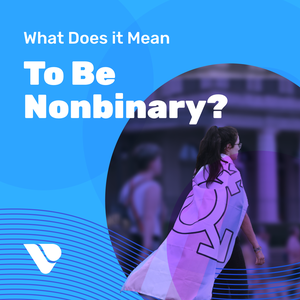 What Does It Mean To Be Nonbinary?
01:47:51 5/27/21 12 audios
Up Next
Full Description
Back to Top
Christine Carino (she/her/siya) is a queer nonbinary immigrant from the Philippines who now works as a transformation coach to help underrepresented executives and leaders reconnect with their authentic selves. She briefly speaks on her own experience being nonbinary and the Tagalog gender-neutral pronoun siya (pronounced "sha").
Transcripts
Back to Top
So let's talk a little bit about you being la binary. You talk a little bit about that journey. Yeah. I'm actually I was very early like what I said, I rejected myself a lot. But now coming into terms to I don't want to follow any rules. Anyone's rules. You know, it's like as as a male or the masculine. I want that feminine energy and like masculine roles need to look like vulnerable, loving, kind, compassionate and female roles could look like courageous and assertive and fears and powerful and all these things and for me that's really now how I operate. But whenever I present masculine, I make sure that what attached to it is compassionate time and then vice versa. So it's really not the binary of what the society has taught us to be. I wanted to be on my own terms. So it's just fully embracing it because I've always had it. I was talking to someone else to about it and like the code switch for me, my code switch experiences presenting female all the time, and that was so exhausting to Yeah, it's like, oh my God, you know, I like to do this dress and look pretty, wear heels and do make up the goal. I love doing makeup and all that, but I don't always want to be female presenting all the time. So now I would wear male clothing with makeup and period, how old are you? I'm 31, I'm in my fifties. Seems like my observation is that a lot of younger people are really embracing the non binary gender and I think a lot of it is because they don't want to be boxed into one particular gender and I think it's really brave to be able to say like, you know, hey, I don't consider myself to be one or the other. So it's really great that young people are feeling the freedom to kind of claim who they are. You know, when I was your age, I wouldn't live. Wasn't even a possibility. So, Right. And let's talk a little bit about your pronouns. You explain before we started recording what your pronouns are. So my project, is she her or shot shot is basically a filipino pronoun for she or her. It's gender less. So I wanted to really use that because it represents me. It's non binary and also filipino. Yeah. And they're really as far as I know. I mean, it doesn't seem like there are very many non binary pronouns and other languages. No, I don't think so. I mean, it seems like they tend to be even more gender. Most languages are more gender than english. Even so that's beautiful. Yeah. And just thinking about it, it's actually, you know, because some of our language is influenced by the spanish language, you will still see that the pure ones that the dialogue would be gender neutral, which is great. That's really interesting. So let's talk a little bit about what you're doing with your life now. So I'm any transformation coach and consultant. As a coach. I help black, indigenous and people of color and LGBTQ plus executives and leaders to reconnect with their authentic selves so they can live and leave consciously and great impact on their own terms. And as a consultant, I help bring culture of transformation in corporate businesses by bringing back the human at the center of it. I wanted to tap into the heart so we can truly embody inclusion belonging at
Up Next
Popular Playlists
Best Yoga Podcasts: Listen & Learn New Poses Sour Shoe's Greatest Moments on The Howard Stern Show Listen to: Top 15 Funniest Barack Obama Quotes 9 Game Design Podcasts Every Game Designer Needs to Hear 7 Podcast Episodes About The Golden State Killer That Will Keep You Up at Night David Parker Ray & Shocking Audio of the Toy Box Killer You Need to Hear Podcasts About UFO & Aliens That Will Abduct Your Mind Audio Cheat Sheet To The Sexy Liberal Podcast Network Controversial Joe Rogan Experience Episodes Audio Wack Packer Beetlejuice Best Moments on The Howard Stern Show 12 Best Episodes of the NoSleep Podcast to Keep You Up at Night
Popular Categories
ASMR Business & Tech Cannabis Fashion & Beauty Gaming History Home & Garden Kids & Family Spirituality Travel
Add to playlist
New playlist