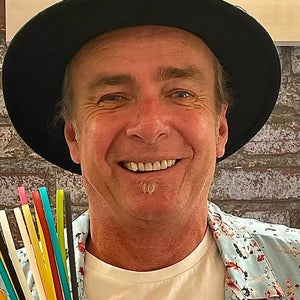 Glenn Dawson - Sucking up The Only Straw

Share
station description Get Off The Bench podcast showcases people who have backed themselves and are havin... read more

Get Off The Bench Podcast
Duration: 52:20
Play Audio
Add to Playlist
Share Report

A troubled childhood and high school dropout at 15, Glenn Dawson always looked for something fulfilling to do with his life and find meaning in the lack lustre careers he'd had in his journey (his words!). Eventually, Glenn took the plunge and moved with his wife to Lombok (Indonesia), and bought a
Category: Documentary
Publish Date: Sep 30, 2021
Tagged in this Audio:
More
Jump to Full Description
Snippets are a new way to share audio!
You can clip a small part of any file to share, add to playlist, and transcribe automatically. Just click the to create your snippet!
Snippets: Clips of Glenn Dawson - Sucking up The Only Straw that people like

There are currently no playlists containing this audio.
Add this audio track to one of your playlists
Add to Playlist
Up Next
Full Description
Back to Top
A troubled childhood and high school dropout at 15, Glenn Dawson always looked for something fulfilling to do with his life and find meaning in the lack lustre careers he'd had in his journey (his words!). Eventually, Glenn took the plunge and moved with his wife to Lombok (Indonesia), and bought a run-down bar and restaurant on a beach. He then proceeded to build a new hotel on the site in 2006, and in 2009 he built a second hotel in the backpacker famous Gili Islands.While the hotel business conjures up images of a life of exotic adventures, it also brought to light the devastation of single use plastics that were washing up on the beaches daily.Glenn had a lightbulb moment that cascaded into endless research about straws and the devastating effects they had on the planet. The project idea was abandoned and allocated to the back blocks of his mind as Glenn longed for a world that would or could have the plastic straw banned one day.By 2019, the hotels were sold and Glenn and his wife were living back in The Gurdies, Victoria permanently. Glenn’s hope picked up as he heard the governments of Australia talking about bans on plastic straws, and decided to act on his idea. Applying his passion, and gaining entry into the prestigious Startup Gippsland incubator program, Glenn’s kickstarted his project, and successfully made it through to the final.The Only Straw, is a completely biodegradable, compostable and zero waste drinking straw, and Glenn is excited about how it will evolve into in the future, and hopes other green products will follow.Socials:Website: The Only Straw https://theonlystraw.com.au/Insta: The Only Straw @the.only.straw LinkedIn: Glenn Dawson FB: The Only Straw @jointhestrevolution Twitter: @TheOnlyStrawMentions:Startup GippslandBass Coast ShireLatrobe Valley AuthorityJim RohnEnjoy the visual here on Youtube
Up Next
Popular Playlists
Best Yoga Podcasts: Listen & Learn New Poses Sour Shoe's Greatest Moments on The Howard Stern Show Listen to: Top 15 Funniest Barack Obama Quotes 9 Game Design Podcasts Every Game Designer Needs to Hear 7 Podcast Episodes About The Golden State Killer That Will Keep You Up at Night David Parker Ray & Shocking Audio of the Toy Box Killer You Need to Hear Best UFO Podcasts That Will Abduct Your Mind Controversial Joe Rogan Experience Episodes Audio Wack Packer Beetlejuice Best Moments on The Howard Stern Show Best NoSleep Podcast Episodes To Terrify You Sexy ASMR Audio to Turn You On
Popular Categories
ASMR Business & Tech Cannabis Fashion & Beauty Gaming History Home & Garden Kids & Family Spirituality Travel
Add to playlist
New playlist