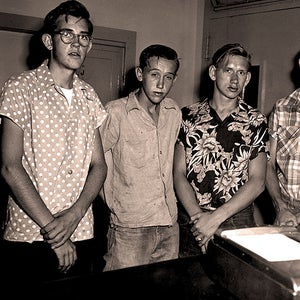 02:57
Play Audio
Add to Playlist
Share Report
Juvenile Delinquency in 1956 – the big problem centered around hubcaps and hubcap stealing for fun and profit. Sounds silly, but apparently it was quite lucrative in 1956, and it drove many teenagers to a life of crime in Los Angeles and other cities around the country.

Past Daily: Amazing Historical Concerts & News
Tagged in this Audio:
More
Jump to Full Description Transcript
Found on these Playlists
Full Description
Back to Top
Juvenile Delinquency in 1956 – the big problem centered around hubcaps and hubcap stealing for fun and profit. Sounds silly, but apparently it was quite lucrative in 1956, and it drove many teenagers to a life of crime in Los Angeles and other cities around the country.

In this documentary, produced by CBS Radio West Coast via KNX, they relied on actual recordings of busts and arraignments of what sounded like hardened teenage criminals in a format very reminiscent of the Cops TV reality show.

Compared to todays drive-by and high-school shootings, stealing hubcaps seems rather lame and ludicrous. But in the 1950s things were still pretty conservative. And teenagers, for the most part, were a rather sedate bunch. The disturbed and violent ones made for prominent copy in magazines and subjects for stories on radio and TV like this one – or wound up as movies, like Rebel Without A Cause or High School Confidential. But as the teenage population grew over the coming years, sedate was a thing of the past and you were more than likely to get busted for a Kilo of Acapulco Gold than the hubcaps to a 1954 Dodge.

But it gives further evidence that things have always been in a perpetual state of change and evolution. And sometimes that evolution can be shocking; the change can be abrupt and potentially disturbing to those older and not used to being the object of those changes. But as years pass, certain customs and rites-of-passage seem inconsequential in comparison to what occurs during the time you’re in. Which makes the well-worn phrases “In My Day” and “I don’t understand these kids” almost as prevalent as the rites of passage that generation goes through.

So, as you listen to this documentary about stealing hubcaps in 1956, just remember that the kids they’re talking about, are no doubt the same age as many of your parents or grandparents – and maybe they cringe and wring their hands over your selfies or mass high-school shootings – they raised their own hell in their day, and it could have been you.

Transcripts
Back to Top
Mhm. The sound you have just heard was the immediate and efficient removal of a sharp 1956 hubcap from a sharp 1956 automobile. The hubcap removed may be viewed by the interested owner. Sundry citizens re and appreciative teenagers at your nearest high school or neighborhood drive in Immeasurably enhancing the sleekness of that cut down hot rod squirreling past us en route to a ball, 1956 teenage style. The Columbia, pacific radio network presents golden hubcaps, a story dealing with an illegal traffic that has grown into mammoth proportions throughout the United States. The theft of automobile hubcaps, the tapes. You will hear our real What kind of hubcaps you have on this car. Prior to this? I'm in the back trunk of 50 51. Mercury is right wheels different than the other. That's why they're all different from the other side. Mhm. Okay. Where'd you get these two? I gotta get some. Yeah, I don't know. I just think you didn't know. I'm swear to that. Where the wood. What have you? You sweat away? That's why I didn't take them off any car. That's all my name is. Tom harmon. One of the voices you've just heard was that of Lieutenant M. B. Myers of the auto theft division, Los Angeles Police Department. The other voice. I swear to that. Where to what? What have you? You sweat away. That's why I didn't take them off any car. That's all does the voice ring familiar to you? A neighborhood boy, The best chum of your own 17 year old or the kid who yelled at you last night when the lights turn from green to red and exhaust fumes of a two tone convertible. Told you once more, the highways are beckoning the young in tremendous numbers. Today we're going to meet quite a few of these youngsters, some in serious trouble, others perhaps following. And we're going to meet quite a few people concerned over the welfare of these sons of yours. For though, an automobile hubcaps may seem to be a strange topic for CBS radio to devote a full half hour of its time and facilities to developing the fact that I am talking to you now means that many interested parties want you the automobile driver to be aware of a problem that is growing up.
Up Next
Add to playlist
New playlist