Your changes have been saved
All Audio Remember That Time: An Historical Podcast
Episode 35 of 78

Share
station description A podcast in which two sisters totally geek out about their favorite moments in his... read more

This week, learn all about Anna's first favorite historical figure: Helen Keller, an activist, socialist, and the definition of dichotomous beliefs.
Category: History
Publish Date: Feb 03, 2020
Tagged in this Audio:
More
Jump to Full Description
Snippets are a new way to share audio!
You can clip a small part of any file to share, add to playlist, and transcribe automatically. Just click the to create your snippet!
Snippets: Clips of Helen Keller that people like
Add to Playlist
Share 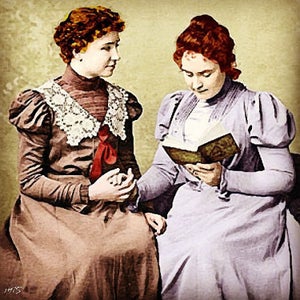 Audio History of Anne Sullivan and Helen Keller
01:22:36 2/3/21 12 audios
Up Next
Full Description
Back to Top
This week, learn all about Anna's first favorite historical figure: Helen Keller, an activist, socialist, and the definition of dichotomous beliefs. And hop on over to the Remember That Time Podcast station, where you'll find informative and entertaining lessons on every historical figure from Dickinson to Diana.
Snippet Transcripts

Snippet of Remember That Time: An Historical Podcast: Helen Keller
24:26-26:30
begins to fail, which is that by this time a woman named Polly Thompson has moved in with them because she's been hired to clean the house. She's a young Scottish woman, which is important, and I'll do background to In a second on Danny Dies in 1936 Helen Keller is holding her hand. Uh, Annie had fallen into a coma as a result of coronary thrombosis, which is basically, ah, blood clot in her heart. So sad, sad. They were companions and they worked together for almost 50 years. Wow! So incredibly long lasting relationship. Yeah. Wow. Anyway, I highly recommend watching the miracle worker because it's all about their relationship in its Yeah, I remember. That's like, That is my first memory of Helen Color is that movie. It's so good. I haven't in a really long time, and I remember very little about it. But like the stuff I do remember is very vivid. Yeah, like I might have to watch it after this recording because they do it. It's been a long time. I love that movie Eso. After Anne's death, Polly previously mentioned sort of becomes Helen's new companion, somebody to travel with her and and help her out. So they together moved to Connecticut. They then keep traveling and raising money for the blind. Polly has a stroke in 1957 and never fully recovers, and she passes away in 1960. 0, that's so sad. Yeah, but a nurse that had been hired to care for her, uh, Winnie Corbally actually stayed onto the Helen's Companion and stay with her until the end of Helen's life. So because she had somebody, she needed to have somebody with her because getting around was difficult. Difficult on DPA, probably like keeping track of schedules and stuff like that. She needed somebody does.
Up Next
Popular Playlists
Best Yoga Podcasts: Listen & Learn New Poses Sour Shoe's Greatest Moments on The Howard Stern Show Listen to: Top 15 Funniest Barack Obama Quotes 9 Game Design Podcasts Every Game Designer Needs to Hear 7 Podcast Episodes About The Golden State Killer That Will Keep You Up at Night David Parker Ray & Shocking Audio of the Toy Box Killer You Need to Hear Best UFO Podcasts That Will Abduct Your Mind Controversial Joe Rogan Experience Episodes Audio Wack Packer Beetlejuice Best Moments on The Howard Stern Show Best NoSleep Podcast Episodes To Terrify You Sexy ASMR Audio to Turn You On
Popular Categories
ASMR Business & Tech Cannabis Fashion & Beauty Gaming History Home & Garden Kids & Family Spirituality Travel
Add to playlist
New playlist