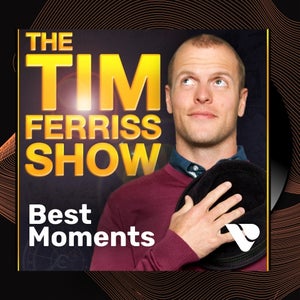 The Best Moments from The Tim Ferriss Show
02:22:51 12/9/20 10 audios
Up Next
Full Description
Back to Top
In this snippet from the first episode, Tim talks to successful entrepreneur Kevin Rose about traits that successful entrepreneurs have.
Transcripts
Back to Top
It's like one of the key you were talking earlier about, like traits that entrepreneurs, successful entrepreneurs have And like no, all the great entrepreneurs, you know, like they work their projects bleed into their personal life, and it's it's sad, but it's true, and they they're focused on that. And so, like, you know, when I was building several some of the companies that built in the past, like it has always been about cutting out that type of stuff, like figuring out where you can prune and cut and create more space so that you can actually have the time to put in the 10 12 hour days. It doesn't feel like it, especially when something you're really passionate about it doesn't feel like you're putting in that much time. But like it's, you can't expect to be a successful entrepreneur. Just working on 9 to 5 like it just doesn't work that way. And, you know, just to address a common, I think misconception with the whole four hour shit that e. M e said that they're like e no fires the fuck. So let me address that The people who haven't read it, uh, the four hour workweek is about optimizing per hour out, but that's it in a story, so you maximize your per hour, but increase that 5 10 X Then, if you're let's say, if you see or investment bank or whatever, you still work the same number of hours, but you just have you have improved volume of output. Ah, same for startup people. The objective is to use your time wisely and allocated to things that you're passionate about. And in that case, for you it would be, Let's say, some of your startups that you've worked on for me where I feel like I am in Arquimedes Lever or can utilize the Arquimedes Lever to really have the broadest impact is say with the book. So I'll spend three years on a book that's a serious investment of time. But the the objective is not to be idle. So I'm just to emphasize that, uh, and I think that once you you should be looking for something that consumes you in a way. I know it might sound negative to some people, but it's like if you're not a hell yes, about what you're doing, then why are you doing in? Or should you be looking for something else? Uh,
Up Next
Popular Playlists
Best Yoga Podcasts: Listen & Learn New Poses Sour Shoe's Greatest Moments on The Howard Stern Show Listen to: Top 15 Funniest Barack Obama Quotes 9 Game Design Podcasts Every Game Designer Needs to Hear 7 Podcast Episodes About The Golden State Killer That Will Keep You Up at Night David Parker Ray & Shocking Audio of the Toy Box Killer You Need to Hear Best UFO Podcasts That Will Abduct Your Mind Controversial Joe Rogan Experience Episodes Audio Wack Packer Beetlejuice Best Moments on The Howard Stern Show Best NoSleep Podcast Episodes To Terrify You Sexy ASMR Audio to Turn You On
Popular Categories
ASMR Business & Tech Cannabis Fashion & Beauty Gaming History Home & Garden Kids & Family Spirituality Travel
Add to playlist
New playlist