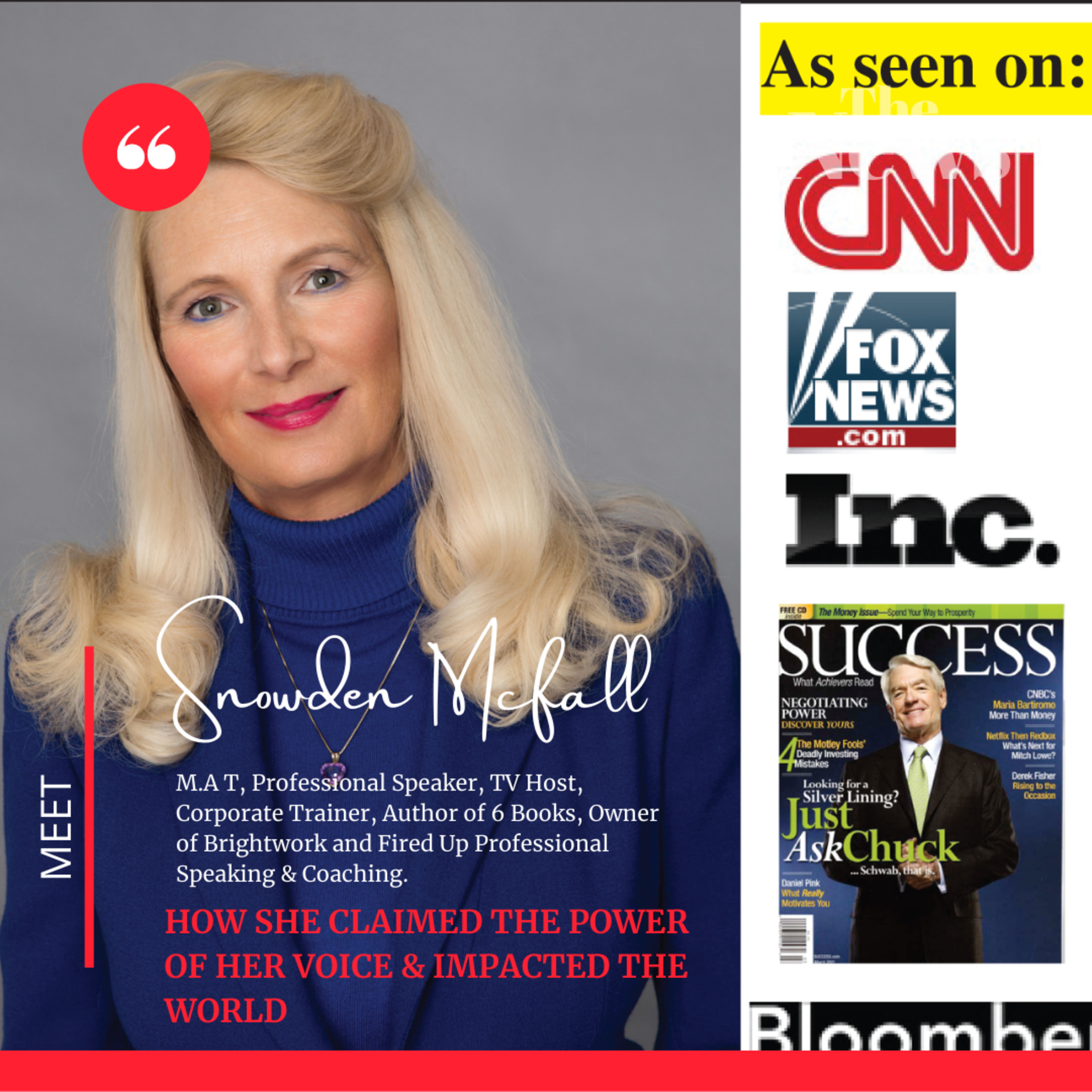 HOW I CLAIMED THE POWER OF MY VOICE & IMPACTED THE WORLD. Season 2 Episode 11

PwS Quote: Adversity causes people to breakdown whiles it gives others the opportunity to break records.
In this episode we featured Snowden McFall, M.A.T, professional speaker, tv host, corporate trainer, and author of 6 books, is owner of Brightwork and Fired Up Professional Speaking and Coaching
Category: Audio Blogs Personal Journals
Publish Date: May 02, 2021
Tagged in this Audio:
More
Jump to Full Description
Snippets are a new way to share audio!
You can clip a small part of any file to share, add to playlist, and transcribe automatically. Just click the to create your snippet!
Snippets: Clips of HOW I CLAIMED THE POWER OF MY VOICE & IMPACTED THE WORLD. Season 2 Episode 11 that people like

There are currently no playlists containing this audio.
Add this audio track to one of your playlists
Add to Playlist
Up Next
Full Description
Back to Top
PwS Quote: Adversity causes people to breakdown whiles it gives others the opportunity to break records.
In this episode we featured Snowden McFall, M.A.T, professional speaker, tv host, corporate trainer, and author of 6 books, is owner of Brightwork and Fired Up Professional Speaking and Coaching.  A business expert who speaks on motivation, stress management, burnout and confident public speaking,  Snowden's book, Fired Up!, has now sold over 65,000 copies. Her newest book is Stress Express: 15 Instant Stress Relievers. She is currently writing a book on women and overwhelm. She is also the host of Ignite Success! a TV show which airs on ABC and YouTube® in Jacksonville, Fl. USA   Snowden received her BA from Vassar College and her Masters of Arts in Teaching from Brown University, in the United States. As co- founder of the non-profit group “Success for Women Entrepreneurs” in New Hampshire, Snowden's volunteer work led to national media attention. The United States Small Business Administration named her National Women in Business Advocate of the Year which led to a White House ceremony & Congressional luncheon in her honor.  Inc. Magazine later chose Snowden as finalist for “New England Entrepreneur of the Year.” Snowden has appeared on 336 radio shows, CNN Financial News, The Home Shopping Network and Bloomberg Television.  Featured in Success Magazine, Investors Business Daily and Foxnews.com as an expert on burnout, Snowden has been speaking for over 25 years and has addressed several thousand professionals in companies like Pepsico, Vistakon, Fidelity National Financial and more. Snowden was voted Small Business Leader of the Year by the Professional Women’s Council for both 2021 and 2009, and is a graduate of Leadership Jacksonville. She received the President’s Volunteer Service Award from President Obama and was named a Woman of Influence by the Jacksonville Business Journal.  In 2020, she became a Certified Money Breakthrough Business Coach for women, coaching them in confident public speaking and making more money.  www.firedupnow.com
Snowden shared with us her life story from growing up in an alcoholic family with a terminally ill mother who became sick when she was 6 and died when I was 21 years old.  For the the first 25 years of her life, she did not speak up, she followed the submission pattern of her mother.  But she got therapy, woke up and learned to claim the power of her voice.  As a child of alcoholics, she still works on myself everyday.
SUBSCRIBE & BE NOTIFIED FOR MORE INSPIRING EPISODES BI-WEEKLY. CLICK ON
https://youtube.com/channel/UC9CwgBb1bsaOHWHdCVsEYaA
Up Next
Add to playlist
New playlist