Your changes have been saved
All Audio In Stitches 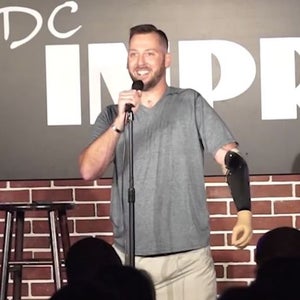 In Stitches: Snippets on Embodying Resilience with Comedian and War Vet, Mr. Adam Keys
01:06:32 12/2/20 3 audios
Up Next
Full Description
Back to Top
One way to make the most of the moment.
Up-and-coming comedian Adam Keys recounts a memorable introduction to host John Oliver, backstage before a big show.
Transcripts
Back to Top
appreciate that. I think that's a good segregates. My last question that I have, Yeah. I'm wondering if you could share when you met John Oliver before combat to Comedy Show in 2019. Remember we when we knew that we were gonna be meeting John Oliver, right? Like I found out that John Oliver was headlining the show and I was like, Okay, we need to figure out a way to get John Oliver to remember us s. So we were, like, skipping before head were like, What could we do to get John Oliver to remember us? E I sent you a text. That was like, I was like, Do you have any extra prosthetics lying around your house? Yeah. And I said, Do we gotta hand? Let's give him a hand. Could you set me a picture? You sent me a picture of this, like, comically large hand that apparently you put on instead of your like the hook sometimes. Yeah. So Okay, so we flash forward a week were at the show we get to meet with, we get to meet with John Oliver. So we go downstairs the basement of Gotham Comedy Club in New York. We have to, like, wheel you around the building because, like, that's the way New York City. Copy. Close where you have to go through four buildings just to get back to the basement of the building. You were in your car, right? Yeah. So you're So you're in there. I bring John Oliver in. Yeah, we're talking in the in the green room back there. He's asking me some questions. Um, his wife's actually, or at least was an army doctor. And he asked me if I knew some of the guys that went to about three. I said, Yeah, I'm good friends with him. So we had a good report right away. We were chatting. He was asking about my comedy how long I've been doing it. I've just been praising him because I'm sitting in front of John Oliver right now, so I'm just sort of starstruck, But I'm trying to be cool, you know? And as the conversations wrapping up, I said, you're not You're gonna remember Adam Keys and remember a stop for the rest of your life. And I gave him the prosthetic hand. I head off my left, he goes, Are you serious. I can keep this. So I I put my card in the hand and we took a picture together, and then hey, went up to this set right after Nikki Glaser, and then I followed him, which was, uh it still gets me fired up, man. It was just a crazy night. Still still a crazy night. My favorite part was you were so smooth, like, out of nowhere. Just like because you you you didn't sell is what you were like. Mr. Oliver were just so, so grateful for your support. I want you to have this and and it's you did a pause on. Then you proceeded to rip your hand off like it was it. It was like you were very slow and very calm. And then you rip your hand off of your arm and you put it in his face on e Don't know if you meant he jumped back. Like, literally, like, jumped back into the chair. E just p. J. When you talk about comedic timing, the delivery on that probably the best delivery I've ever seen. That was one of the best nights of my life. I got them coming club and thank you. Face that for for the invitation. I'll go back anytime. Awesome man.
Up Next
Popular Playlists
Best Yoga Podcasts: Listen & Learn New Poses Sour Shoe's Greatest Moments on The Howard Stern Show Listen to: Top 15 Funniest Barack Obama Quotes 9 Game Design Podcasts Every Game Designer Needs to Hear 7 Podcast Episodes About The Golden State Killer That Will Keep You Up at Night David Parker Ray & Shocking Audio of the Toy Box Killer You Need to Hear Best UFO Podcasts That Will Abduct Your Mind Controversial Joe Rogan Experience Episodes Audio Wack Packer Beetlejuice Best Moments on The Howard Stern Show 12 Best Episodes of the NoSleep Podcast to Keep You Up at Night Sexy ASMR Audio to Turn You On
Popular Categories
ASMR Business & Tech Cannabis Fashion & Beauty Gaming History Home & Garden Kids & Family Spirituality Travel
Add to playlist
New playlist