Share
station description Jim Robbie is a curmudgeon robot made out of a radio, a tin can, and silverware. Hi... read more 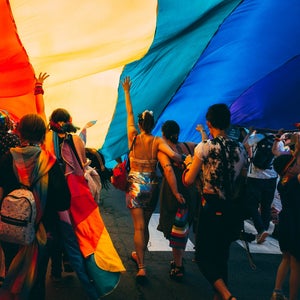 Best Fictional Audio Dramas With LGBTQ+ Representation
01:12:01 6/11/21 13 audios
Up Next
Full Description
Back to Top
In post-zombie-apocalypse New York City, Jim Robbie and his band of musicians try to make their mark! Their nose for trouble might get them in a pickle as they start playing a dangerous game with the police. Or rather, the zombie police of New York.
Transcripts
Back to Top
need to lighten up. We're minstrels with undercover cop badges. What could be better cover than that? Anything, but oh, shut, You could at least pretend to be happy. I've never seen them before at our meetings. Are they already in costume? Of course not. They're humans. But what are humans doing out after dark to a lot of humans do that? Should we call the police? Do you think they're on to us? I mean we just walked through the door, but maybe they know we were supposed to burn the bridge after we crossed it. Not while we're on it, tango. Hey, I'm marla. Let's see what we got. Way wicked. You're both humans. No cloudy eyes or muscle Atrophy. Come on. I can help you get into your roles. So since you're already humans, you'll probably want to be songs. I mean, you could be humans if you wanted, but it kind of kills the immersion aspect, you know? So, uh what are you doing at this party? I mean, uh, he looks like a zombie, is he? Of course he's not a zombie. He doesn't have that weird register of moaning when zombies talk. It always has this weird staticky sound. It looks like a zombie, not a zombie deng, even the little red radio saw through that. Got to figure that out. Still. Well, since the radio solved through me, you get to go first. So what do you want to be? Mm dead zombie? It is. Hang on. So you're not a zombie. Did any of them put you up to it? Are you blending into also, it's a live action role play night. Are you kidding me? Nope. Tonight all the zombies have blood pumping through their hearts and the humans shamble through the streets. I still need to figure out how to get the moaning down apparently. But my makeup work is top notch. If I do say so myself, you do realize I'm a radio. Nothing that can really get mutated here can melted wires count is like maybe sun ra charlie, What's it called again? Solar radish ng Yeah, that's it. Well, if you're all going to be zombies, you should all look the part starting with you. Hey, let go. I said, okay, okay, fine. But if someone bites me, I'm going to rip off their arm and slap them with it. Take her charlie. Just turn her into the creepiest thing you can think of helping. Maybe someone around here can give us the zombie makeover to with some space to punch out some songs. Mhm Hey, tango. Right? Um, so this party's wicked, Right? So many zombies, can you teach me to hook up my coffee machine? Yeah. What? How do you hook up a coffee machine? A lot of smooth talking and the fear of having your wires fright with hot water. Oh, that's not. Um Okay, how about we hit the snack bar? There's all sorts of stuff, sandwiches with uhh, bird meat. Uh I mean, yeah, Turkey is great, young food, free food ways. It kosher. Oh yeah, I guess so. Where's the snack bar? Oh man, charlie. You make a good looking zombie. The makeup is cool. I didn't even recognize you when you walk through the door. My face feels £10 heavier and I can't feel anything other than it. Middle East. Your looks match your personality. Now go to the scrapyard and let me drown in my happy place.
Up Next
Popular Playlists
Best Yoga Podcasts: Listen & Learn New Poses Sour Shoe's Greatest Moments on The Howard Stern Show Listen to: Top 15 Funniest Barack Obama Quotes 9 Game Design Podcasts Every Game Designer Needs to Hear 7 Podcast Episodes About The Golden State Killer That Will Keep You Up at Night David Parker Ray & Shocking Audio of the Toy Box Killer You Need to Hear Best UFO Podcasts That Will Abduct Your Mind Controversial Joe Rogan Experience Episodes Audio Wack Packer Beetlejuice Best Moments on The Howard Stern Show 12 Best Episodes of the NoSleep Podcast to Keep You Up at Night Sexy ASMR Audio to Turn You On
Popular Categories
ASMR Business & Tech Cannabis Fashion & Beauty Gaming History Home & Garden Kids & Family Spirituality Travel
Add to playlist
New playlist