Is Thailand and Third-World Country

From Audio: What Are People Asking Google About Thailand? [Season 3, Episode 23] 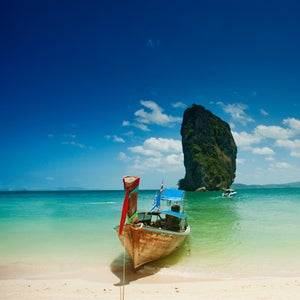 Talking Travel: An Audio Guide To Thailand
02:01:34 6/29/21 15 audios
Up Next
Full Description
Back to Top
Discover whether or not Thailand is a third-world country, and how third-world countries became third--world countries in the first place. Apparently, the first, second, and third-world designations were assigned — more or less arbitrarily — by a French demographer named Alfred Sauvy. The terms have fallen out of fashion in favor of terms like "developed," and "undeveloped," but the short answer is that Thailand is a mixed bag. Bangkok, for instance, is highly developed. Other areas of the country are not, which some could say adds to the country's charm.
Transcripts
Back to Top
was is Thailand a third world country? Uh, interesting. I like that is Thailand a third world country. I think that the term third world country is a little bit, in a way. It's I think it's not pc to go back to one of our topics from from the bonus show. What did you find out in your research? Well, that's exactly it actually. And I found out that the original definition of a third world country came from the sixties when some economist, he decided that a first world country was NATO and the commonwealth. So NATO countries in the commonwealth countries. Second world country was Russia and all of her, you know, satellites and third world country was everything else interesting? Yeah. I never I never I never knew where those terms came from. Yeah. But over the years a lot has changed political correctness for one thing and you know, a lot of economic upsets have happened. Countries have risen countries have fallen. Um, so now there is no one definition of 1st, 2nd or third world country and they're not even used as often as they used to be at least officially. The term that seems to be most used now. The U. N. Uh And the international monetary fund classified Thailand as a developing nation. Uh So maybe so I think okay these may be rough but I think I think the term first world has been replaced with the term developed like E. D. And maybe the middle tier now is called developing and then uh possibly the third world then would be undeveloped. So in a way that makes sense because I think uh like Thailand is kind of in the middle ground because I you know the way I you know when I talk to my students I always tell them that Bangkok is developed and many other parts of talent I think are undeveloped. So the average, you know Thailand averages out to being developing.
Up Next
Popular Playlists
Best Yoga Podcasts: Listen & Learn New Poses Sour Shoe's Greatest Moments on The Howard Stern Show Listen to: Top 15 Funniest Barack Obama Quotes 9 Game Design Podcasts Every Game Designer Needs to Hear 7 Podcast Episodes About The Golden State Killer That Will Keep You Up at Night David Parker Ray & Shocking Audio of the Toy Box Killer You Need to Hear Best UFO Podcasts That Will Abduct Your Mind Controversial Joe Rogan Experience Episodes Audio Wack Packer Beetlejuice Best Moments on The Howard Stern Show 12 Best Episodes of the NoSleep Podcast to Keep You Up at Night Sexy ASMR Audio to Turn You On
Popular Categories
ASMR Business & Tech Cannabis Fashion & Beauty Gaming History Home & Garden Kids & Family Spirituality Travel
Add to playlist
New playlist