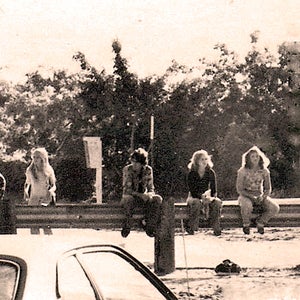 Start Time: 00:00 End Time: 04:03
Smack in the middle of Summer. Endless days and endless nothing. Just you, your buds, your tunes and a retaining wall. Every day it’s the same thing – its your routine. You get up, get dressed and head down to the beach. Take the Number 7 down Pico to the end and hitch a ride up PCH to Malibu. You m
Category: Radio
Publish Date: Jul 17, 2021
Snipped By:
Share
station description Past Daily: News, History, Music And An Enormous Sound Archive.

Past Daily: Amazing Historical Concerts & News
Jump to Full Description Transcript
Playlists that It's July 16, 1979 - You Live In L.A. - You're A Teenager - It's The Middle Of Summer - You Have A Whole Lot Of Nothing To Do. appears on.

There are currently no playlists containing this audio.
Add this audio track to one of your playlists
Add to Playlist
Up Next
Full Description
Back to Top
Smack in the middle of Summer. Endless days and endless nothing. Just you, your buds, your tunes and a retaining wall. Every day it’s the same thing – its your routine. You get up, get dressed and head down to the beach. Take the Number 7 down Pico to the end and hitch a ride up PCH to Malibu. You meet up with your pals – you body surf for a few hours and then you spend the rest of the day perched on the same retaining wall, watching people and cars, your nose slathered with Zinc-Oxide. Cracking bad jokes with your friends, telling outrageous tales – shooting the breeze, dragging on Marlboro reds and guzzling a 32 ounce Big Gulp. That’s your day – that’s been your day ever since it stopped being fog and low-clouds/hazy sun like it was all June. Like clockwork – the day after the 4th, Summer hits the beach big-time and you’re there till Labor Day and then you head back to school. Simple – no stress, no work, no tests – lots of nothing and every so often a cute girl walks by – sometimes with her friends. You practice eye-contact and clever lines. You try not to stare too hard – her eyes are “up there” and she’s usually wearing shades so you don’t know if she’s looking back or ignoring you. She walks by and each one of your friends takes their turn; eye contact-clever lines. Sometimes she says hi back and stops to bum a cigarette and talk or nods her head and keeps walking. And then it’s back to watching cars. PCH gets crazy in the afternoon and you like looking at the expressions on peoples faces when they’re stuck in traffic. People are funny when they’re pissed – especially when they have no place to go. Around 6:30 you all turn around to face the ocean – it’s part of the daily ritual; watching the sun go down. It dips behind the horizon and that’s your signal to head back down PCH, grab the bus and head home. And you do it all over again the next day – and the next and the next. That’s your summer – big chunks of nothing broken up by watching people and hanging out. Life is cool – life is perfect – you wish it was like this all the time. It won’t be next year. Next year you’ll graduate, turn 18 and become responsible – be an adult and have car insurance to pay, which means a job. Which means no more hanging out – no more watching – no more days full of nothing. That’s next year.
Transcripts
Back to Top
Way around that can't change that. You can't get there from here. Radio wave hits 97 way, I promise that way. That way. You're the only one of me, I can't change that. I need your baby. We owe the oh, you can't change the baby. But I bet her husband can radio 90 five oclock hits with Jack Armstrong. And everybody want to know where charlie tuna is, charlie has been on vacation for the last couple of weeks and he will be back this coming monday five in the morning. That's when you'll be here. Actually do a little freelance gig out of Disneyland. I'm not supposed to say that, but you know those of you who have been in the Tunnel of Love, you know when it's real dark in there and you're sitting right next to one another, it's the part you've been waiting for all through the amusement park, charlie's the one right there during the last couple of weeks that has been saying turn on the nights this summer with a disco experience that goes beyond your wildest graves. It's dancing to the dynamic live sounds of today's hottest disco music. Disco at Space Mountain. It's a kaleidoscope of color, light, Cisco at Space Mountain and spell by the magic and illusions to dazzle your eyes and ears go and Space Mountain make your disco dreams come true every night except sunday Disco at Space Mountain. It can only happen at Disneyland, I should say. Thank you on your way out of the tunnel is to celebrate boxes move from.
Up Next
Popular Playlists
Best Yoga Podcasts: Listen & Learn New Poses Sour Shoe's Greatest Moments on The Howard Stern Show Listen to: Top 15 Funniest Barack Obama Quotes 9 Game Design Podcasts Every Game Designer Needs to Hear 7 Podcast Episodes About The Golden State Killer That Will Keep You Up at Night David Parker Ray & Shocking Audio of the Toy Box Killer You Need to Hear Podcasts About UFO & Aliens That Will Abduct Your Mind Audio Cheat Sheet To The Sexy Liberal Podcast Network Controversial Joe Rogan Experience Episodes Audio Wack Packer Beetlejuice Best Moments on The Howard Stern Show 12 Best Episodes of the NoSleep Podcast to Keep You Up at Night
Popular Categories
ASMR Business & Tech Cannabis Fashion & Beauty Gaming History Home & Garden Kids & Family Spirituality Travel
Add to playlist
New playlist