Your changes have been saved
All Audio Oprah’s Master Class: The Podcast

John Lewis on Never Giving Up

Share
station description Hear the greatest life lessons of some of the most respected and renowned actors, m... read more

Start Time: 26:21 End Time: 28:31
In this snippet from Oprah's Master Class, John Lewis talks about how we must never give up in the fight against injustice.

To listen to more, check out our playlist of the greatest John Lewis quotes. 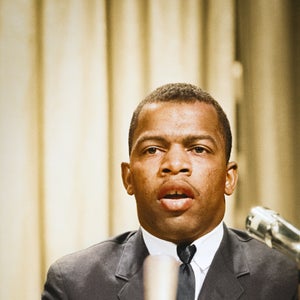 Audio Memorial: The Greatest John Lewis Quotes
01:54:49 1/6/21 6 audios
Up Next
Full Description
Back to Top
In this inspiring snippet from Oprah's Master Class, John Lewis talks about how we must never give up in the fight against injustice. There were times when he was hurt, and almost killed, but he never gave up in the fight to make things better for the next generation.
Transcripts
Back to Top
you must believe that some high in some way we're going to overcome we're going to survive may get knocked down. But you got to get up, dry your tears and keep moving during the freedom rides or during the sit ins during my efforts in Mississippi around the vote, working in Selma, I never, ever thought about given up. And then it is too much. I never thought about dropping out. You come to that point, but you say I got to go on and see what they ain't going to be. You have to You have to get out there and push and pull to try to make things better. The generations yet unborn, each one of us has the ability to resist, not to be quiet. We have to be brave. We have to be bold. We have toe use a constitutional right. It means a march or silent walk a sit in or sit down or maybe signing a petition writing the letter voting. We have to be engaged. All of us as members of the human family, as citizens of this country, their forces, they wanted to take us back to another place, and we're saying We're not going back but come too far. We made too much progress to stop, not or to turn around. That's I feel it is quarter my obligation, my mission, a mandate to reach as many young people as possible. The fight is not over. We have to continue to fight, and sometimes you have to fight some of the old battles over and over again for the next generation. For generations yet unborn, you too can make a contribution, and you must.
Up Next
Popular Playlists
Best Yoga Podcasts: Listen & Learn New Poses Sour Shoe's Greatest Moments on The Howard Stern Show Listen to: Top 15 Funniest Barack Obama Quotes 9 Game Design Podcasts Every Game Designer Needs to Hear 7 Podcast Episodes About The Golden State Killer That Will Keep You Up at Night David Parker Ray & Shocking Audio of the Toy Box Killer You Need to Hear Podcasts About UFO & Aliens That Will Abduct Your Mind Audio Cheat Sheet To The Sexy Liberal Podcast Network Controversial Joe Rogan Experience Episodes Audio Wack Packer Beetlejuice Best Moments on The Howard Stern Show 12 Best Episodes of the NoSleep Podcast to Keep You Up at Night
Popular Categories
ASMR Business & Tech Cannabis Fashion & Beauty Gaming History Home & Garden Kids & Family Spirituality Travel
Add to playlist
New playlist