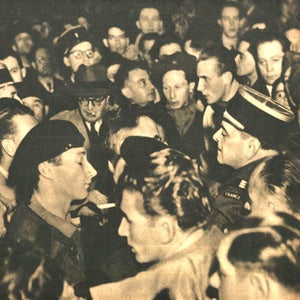 Start Time: 03:51 End Time: 06:46
During a day where the political and socio-economic growing pains were dragging on throughout Europe, talk about the strange weather gripping the U.S., from extreme drought to extreme heat, had everyone peering ominously at the recent Atomic Bomb tests in the Pacific, asking if those mushroom-shaped
Category: News & Politics
Publish Date: Jul 01, 2021
Snipped By:
Share
station description Past Daily: News, History, Music And An Enormous Sound Archive.

Past Daily: Amazing Historical Concerts & News
Jump to Full Description Transcript
Playlists that July 1, 1947 – The Paris Summit – The Cold War – Not Least Of All, The Weather appears on.

There are currently no playlists containing this audio.
Add this audio track to one of your playlists
Add to Playlist
Up Next
Full Description
Back to Top
During a day where the political and socio-economic growing pains were dragging on throughout Europe, talk about the strange weather gripping the U.S., from extreme drought to extreme heat, had everyone peering ominously at the recent Atomic Bomb tests in the Pacific, asking if those mushroom-shaped clouds had anything to do with the weird weather. And on this July 1st in 1947 the answer from the Weather Bureau was an emphatic no. Meanwhile, the Mississippi River in the St. Louis area was overflowing its banks in record amounts and causing widespread flooding – the most in 103 years. So while Washington basked in the steaming-wet gym sock of Summer heat, life went lumbering on. Strikes were threatening all over the country and negotiations were feverish. Another storm of controversy surfaced when the President suggested, as reaction to the Rent Control situation, to suggest Congress nvestigate the Real Estate lobby. The Home Builders and Real Estate Associations were accused to applying pressure to members of Congress with misleading and false propaganda regarding President Truman‘s Housing programs. Word from Paris was anticipated pessimism over the latest Paris Economic Conference. Over the next several weeks the delegates hammered out a report estimating Europe’s needs. Furthermore, they established a more permanent group, the Organization for European Economic Cooperation (OEEC). In the near term, this group served to coordinate the use of Marshall Plan funds. In the long term, however, the OEEC would help pave the way for the economic integration of Europe. Word was waited on during the broadcast, but the much hoped-for communique hadn’t come. So everyone speculated for the worst. And that’s a lot of how the day went, this 1st of July 1947 as told by H.R. Baukhage over ABC Radio. And apologies in advance for the badly damaged transcription disc for the first minute or two – history sometimes comes with warts.
Transcripts
Back to Top
these letters. That has impressed me. Take this one, for instance, comes from a man in the firm 70 years old. I mean, the firm is 70 years old. He says that firm knows how to get along with people. He says, uh, one of the best, one of the best moneymakers in the nation with the volume, Which approaches $100 million. They make these profits, he says, because not a single worker has to take time out to find out if he's being treated right. He knows he is and he uses all his time concentrating on the job. He knows that the company uses the profits in such a way that during The terrible depression of 19 after 1929, not a single worker was let out, even though there was nothing for him to do but to go through the motions of cleaning up his department several times a day. And here's a here's another letter letter from the president of a union, a local, and he writes with real pride about the plan. He says, uh, we of course have our differences, but with each side giving a little, we've cleared the table and walked away, friends. All the troubles, he said were settled that way. Another letter from the Financial Secretary of a union mentioning his firm's and saying that he could give many such cases where harmonious relations exist. I quote these letters to show the enthusiasm, these writers, both the union and the management employees, other management in show, in wishing to reveal the other side of the better side of the labor management picture. I can see now other National Planning Association chose this method of approach, of making studies of the successes rather than the failure I think will be worth seeing when it comes out. Another investigation, which might be interesting or not so much in the hopeful side is the one the president suggested in his message on rent controls he sent to Congress yesterday sent just too late for me to report on present. In that message. Talked about the brazen operations of the real estate lobby yards. Congress to investigate. Well, that brought a storm of controversy, naturally, it would in a political year. Also in a strong group like that with a lot of a good strong supporters in Congress is singled out what interested me was that, although Senator Bricker, Republican of Ohio, sprang to the defence of the real estate people labeled the President's reference demagoguery. Senator taft Republican, also from Ohio said he wouldn't mind doing uh that investigation himself. And so that rather lifted the discussion out of partisan politics staff, of course, he made quite a study of housing. And while he didn't elaborate his statement that he'd like to investigate the real estate lobby, it was pointed out that last week in addressing a fight for housing rally staff said that misrepresent
Up Next
Popular Playlists
Best Yoga Podcasts: Listen & Learn New Poses Sour Shoe's Greatest Moments on The Howard Stern Show Listen to: Top 15 Funniest Barack Obama Quotes 9 Game Design Podcasts Every Game Designer Needs to Hear 7 Podcast Episodes About The Golden State Killer That Will Keep You Up at Night David Parker Ray & Shocking Audio of the Toy Box Killer You Need to Hear Podcasts About UFO & Aliens That Will Abduct Your Mind Audio Cheat Sheet To The Sexy Liberal Podcast Network Controversial Joe Rogan Experience Episodes Audio Wack Packer Beetlejuice Best Moments on The Howard Stern Show 12 Best Episodes of the NoSleep Podcast to Keep You Up at Night
Popular Categories
ASMR Business & Tech Cannabis Fashion & Beauty Gaming History Home & Garden Kids & Family Spirituality Travel
Add to playlist
New playlist