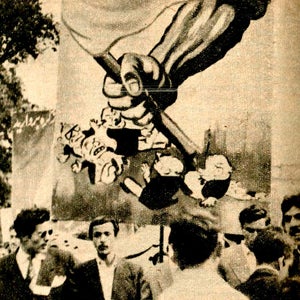 Start Time: 00:00 End Time: 01:27
News for this day, 70 years ago had much to do with shaky alliances being formed around the world. Starting with news that the U.S. and Spain were taking steps to entering into an alliance which had military and political significance. Spain, once shunned by the U.S. over the dictatorship of Genera
Category: News & Politics
Publish Date: Jul 16, 2021
Snipped By:
Share
station description Past Daily: News, History, Music And An Enormous Sound Archive.

There are currently no playlists containing this audio.
Add this audio track to one of your playlists
Add to Playlist
Up Next
Full Description
Back to Top
News for this day, 70 years ago had much to do with shaky alliances being formed around the world. Starting with news that the U.S. and Spain were taking steps to entering into an alliance which had military and political significance. Spain, once shunned by the U.S. over the dictatorship of Generalissimo Francisco Franco, was now warming to the idea of becoming included in a partnership against Communism. Admiral Forrest Sherman, chief of Naval Operations held a conference with Franco in Madrid earlier this day, and the subject was believed to be the possibility of establishing Naval and Air bases in Spain, not under NATO (because of French-British objections) but under a separate Spanish/American treaty. It was common knowledge that Spain had been actively in the process of constructing airfields with capital from an undisclosed source, many believed that source was the U.S. and that this announcement of an alliance was an official acknowledgement. The talks with Admiral Sherman were believed to regard the possibilities of Spain opening ports to the American 6th Fleet, based in the Mediterranean – the ports being used primarily for fuel and ammunition storage. Response from Britain and France was swift, who denounced the move saying that if any or all of these issues came to pass, the Russians were bound to exploit the move from one end of Europe to the other, as an example of making a deal with Fascism. They felt the deal would weaken NATO’s position at the bargaining table. Meanwhile, Franco was reported to be making a cabinet reorganization in order to strengthen ties with the U.S. – it was also noted that Spain had the largest standing army in Europe of some 400,000 troops, but that they were in dire need of modern equipment. And so the deal, in exchange for bases and landing rights; Arms and military equipment. Ceasefire talks were continuing in Korea with opinion that some concrete results may emerge sooner rather than later. Observers said tensions had relaxed, teams were in a friendlier mood and even the Communist team posed obligingly for photos. In Iran, Martial law was declared as rioting the previous day claimed as many as 16 in Tehran. The riots, coinciding with a visit by Averill Harriman, who was sent by President Truman to see if some resolution to the Iranian Oil nationalization dispute could be ironed out, were in protest to U.S. involvement in the Oil crisis. Many in the State Department felt the riots in Tehran were Communist and Nationalist inspired, making the most of an opportunity to denounce American Imperialism and to capitalize on the Oil nationalization dispute. Harriman had two conferences with Premier Mossadegh but it was felt the talks were destined to do very little in light of the situation between Iran and Britain. British officials were fearful that new trouble was going to break out at the refinery in Abadan. And that’s just a small sample of what went on in the world this July 16th in 1951 – as reported by Don Hollenbeck, substituting for Edward R. Murrow and The News.
Transcripts
Back to Top
Mhm. Yeah. Okay. A. M. O. C. O. Amoco. Amoco presents the Edward R Murrow program with Don Hollenbeck. If you want a good estimate of how long 30 seconds is just say hippopotamus, 30 times. It'll take you just about that long to say it. I'm telling you this to impress. One important point. No matter how far you drive, a lot of the wear on your engine comes in the 1st 30 seconds after you started slow flowing oil is the reason cut this where by using fast flowing per malu motor oil, there's nothing like it for fast action. And now here is Don Hollenbeck with the news. Good evening. The United States today took the initial step in what may turn out to be the inclusion of Spain in a new western alliance against communism. Admiral Forrest. Chairman. The Chief of Naval Operations held a conference with Generalissimo franco in Madrid today. And the subject of that conference is understood to be the possibility of establishing american and naval and air bases in Spain, not under the atlantic alliance because of the objections of Britain and France, but under a separate, spanish american treaty. Spain already is reported to be pushing construction of airfields with capital from an undisclosed source, and the theory not too difficult of belief is that some sort of quiet understanding has been arrived at, under, which, when the time seems propitious, this cunt.
Up Next
Popular Playlists
Best Yoga Podcasts: Listen & Learn New Poses Sour Shoe's Greatest Moments on The Howard Stern Show Listen to: Top 15 Funniest Barack Obama Quotes 9 Game Design Podcasts Every Game Designer Needs to Hear 7 Podcast Episodes About The Golden State Killer That Will Keep You Up at Night David Parker Ray & Shocking Audio of the Toy Box Killer You Need to Hear Podcasts About UFO & Aliens That Will Abduct Your Mind Audio Cheat Sheet To The Sexy Liberal Podcast Network Controversial Joe Rogan Experience Episodes Audio Wack Packer Beetlejuice Best Moments on The Howard Stern Show 12 Best Episodes of the NoSleep Podcast to Keep You Up at Night
Popular Categories
ASMR Business & Tech Cannabis Fashion & Beauty Gaming History Home & Garden Kids & Family Spirituality Travel
Add to playlist
New playlist