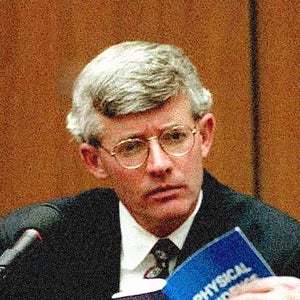 There are currently no playlists containing this audio.
Add this audio track to one of your playlists
Add to Playlist
Up Next
Full Description
Back to Top
July 6, 1995 – The Grilling continues at the OJ Simpson Trial. A freak storm injures scores at a Grateful Dead concert campgroun in Missouri. President Clinton mulls defense jobs and base closures. As news days go – not a cliffhanger. The news starts off with word on a possible economic slump heading our way. The OJ Simpson trial resumed after the fourth of July holiday and it was back on the witness stand for FBI Agent Douglas Deedrick for another day of grilling and testifying. Word that a freak storm and resulting downpour along with flash-flooding tore through a campground in Winfield Missouri occupied by a few thousand Deadheads for an upcoming concert in St. Louis, causing widespread injuries reported by eyewitnesses. Campers seeking shelter were trapped under a collapsed campground pavilion injuring some 130; 30 seriously. Earlier reports that two campers had died of drug overdoses prompted one Deadhead to remark it was The Grateful Dead’s Summer from Hell. The next morning brought hundreds of campers wandering through the disaster scene, covered in mud, dazed and wrapped in blankets. The collapsed pavilion was reduced to a pile of nails, timber and debris. And President Clinton wound up getting caught in the crossfire over the hitlist recommended by the base closing commission and the resulting loss of some 11,000 jobs in California from the proposed closing of the Mcclellan Air force Base in Sacramento. Since election time was just around the corner, the fallout could prove disastrous for Clinton’s re-election bid. Basically, the President had two options; accept or reject all of the commissions recommendations; no bits and pieces. The only possibility was handing the hot-potato to the Defense Department to figure out how to work around the problem and save California a few thousand jobs. And that’s just a small slice of what happened on July 7, 1995 as presented by The CBS World News Roundup.
Transcripts
Back to Top
Fans hurt when a storm hits Missouri Campground President mulls plan to save California defense jobs, good thursday morning, Bill lynch with the CBS. World News Roundup. Government's main economic forecast engage the index being indicators dropped by 2/10 of 1% in May, the fourth consecutive decline. That's the longest negative string since the onset of the last recession, economist, Sandra Shaver says five of the 11 components were weaker in May. It's been credit sensitive sectors housing particularly, and cars to a lesser degree that have really slumped and that has pulled down the economy. Now. What the Fed hoped for was a momentary pause. The so called soft landing, that's very difficult to achieve. The latest evidence of a slump comes on a day. The Feds.
Up Next
Popular Playlists
Best Yoga Podcasts: Listen & Learn New Poses Sour Shoe's Greatest Moments on The Howard Stern Show Listen to: Top 15 Funniest Barack Obama Quotes 9 Game Design Podcasts Every Game Designer Needs to Hear 7 Podcast Episodes About The Golden State Killer That Will Keep You Up at Night David Parker Ray & Shocking Audio of the Toy Box Killer You Need to Hear Podcasts About UFO & Aliens That Will Abduct Your Mind Audio Cheat Sheet To The Sexy Liberal Podcast Network Controversial Joe Rogan Experience Episodes Audio Wack Packer Beetlejuice Best Moments on The Howard Stern Show 12 Best Episodes of the NoSleep Podcast to Keep You Up at Night
Popular Categories
ASMR Business & Tech Cannabis Fashion & Beauty Gaming History Home & Garden Kids & Family Spirituality Travel
Add to playlist
New playlist