Your changes have been saved
All Audio Wharton Business Daily

Assistant Professor of Political Science at The Wharton School, Marc Meredith, talks about mail-in voting for upcoming presidential election amidst the Coronavirus Pandemic. See acast.com/privacy for privacy and opt-out information.
Category: Business & Tech Entrepreneurship
Publish Date: Sep 03, 2020
Tagged in this Audio:
More
Jump to Full Description
Snippets are a new way to share audio!
You can clip a small part of any file to share, add to playlist, and transcribe automatically. Just click the to create your snippet!
Snippets: Clips of Mail-In Voting is Safe & Secure: Here's Why that people like
Add to Playlist
Share 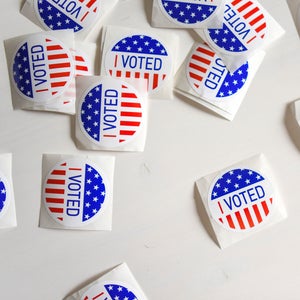 An Audio Guide to the U.S. Presidential Election
48:25 10/7/20 8 audios
Up Next
Full Description
Back to Top
Assistant Professor of Political Science at The Wharton School, Marc Meredith, talks about mail-in voting for upcoming presidential election amidst the Coronavirus Pandemic. See acast.com/privacy for privacy and opt-out information.
Snippet Transcripts

Highlight Clip of Wharton Business Daily Episode Mail - In Voting is Safe and Secure
00:50-03:50
Or should not there be about mail in voting? We should have very little concern about about mail in voting. Uh, the rate of voter fraud in the United States is exceedingly rare. It's exceedingly rare whether people voting person whether they vote by mail on DSO, especially given our current circumstances, where some people just don't feel comfortable voting, uh, in the polling place. Because of Covic. It's particularly important that we way make mail ballots accessible to them so that they can they can participate in the election. So there's a lot of conversation about the differences, or or not between absentee and mail in voting. Functionally, are there differences between the two? Yeah, different states use different words toe label their system. Uh, some people use that term absentee voting to refer to a broader set of of ways of voting, uh, including early in person voting. Some states group that under the heading of absentee voting to but there is There is some differences in states that use, um, vote by mail systems on Deezer states like Oregon and Washington that essentially require people that vote by mail. Often, there's a maybe a way that you could still turn your ballot in person. So there are some functional differences in in vote by mail states and and states for which they have in person Election day voting still as an option. But the distinction between mail ballots and absentee ballots and other other phrases that people may use really aren't that important. What about the the concern that's also been brought up about the post office handling a large volume of ballots? I mean, obviously there used to carrying a lot of different pieces of mail each and every day. Most of this is a really interesting element that's been been added recently. Thio the general. The general chaos around this election. Um, the some of the new policies have been instituted by the post office, uh, included directive that that are attempting to cut cough by ensuring people start their mail routes um, timely way and trying to reducing over time people might have to pay. And 11 byproduct of this is people are being directed to start their start their male rabbits, even if their truck isn't fully loaded for the day yet and just come back and get the mail. Presumably the next day that didn't make it onto the truck. And I think there was concerned, especially given the short time frame, that people may have to then request their mail ballot haven't sent to their house getting back to the election officials about how that might affect people's ability to return ballots and in the time that you to in order for them to count in the election in terms of the midterm election.
Up Next
Popular Playlists
Best Yoga Podcasts: Listen & Learn New Poses Sour Shoe's Greatest Moments on The Howard Stern Show Listen to: Top 15 Funniest Barack Obama Quotes 9 Game Design Podcasts Every Game Designer Needs to Hear 7 Podcast Episodes About The Golden State Killer That Will Keep You Up at Night David Parker Ray & Shocking Audio of the Toy Box Killer You Need to Hear Best UFO Podcasts That Will Abduct Your Mind Controversial Joe Rogan Experience Episodes Audio Wack Packer Beetlejuice Best Moments on The Howard Stern Show Best NoSleep Podcast Episodes To Terrify You Sexy ASMR Audio to Turn You On
Popular Categories
ASMR Business & Tech Cannabis Fashion & Beauty Gaming History Home & Garden Kids & Family Spirituality Travel
Add to playlist
New playlist