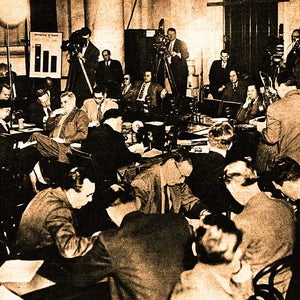 Past Daily: News Junkies
05:49:19 11/2/20 82 audios
Up Next
Full Description
Back to Top
News for the week ending March 11, 1950
Transcripts
Back to Top
the living record of history. This week, you will hear Senator Joseph McCarthy and Brian McMahon. Election news from Radio Moscow General Omar Bradley, Fred Allen these and many others, the actual voices of the people who made the news this week as they made it. Now here's your voices and events. Editor James Fleming This was the week that a girl from Brooklyn and a man from Russia were convicted of spying against the government of the United States. Any credit for this victory must go principally to the FBI. For without the vigilance and the perseverance of its agents, Ms Copeland and the Russian Guba Kev would never have been apprehended, let alone convicted. That was the government prosecutor, John Kelly. Attorneys for the defense thought differently. Counsel for the Russian was Abraham Pomerance. The jury found that Ms Copeland did not attempt to pass any papers. Taguba chief. But my next breath had found that Gorbachev did attempt to receive papers from Copeland. Now, if you can figure out how Goober Chief could attempt to receive documents from Ms Copeland without Miss Copeland attempting to pass them to him, well, you're just a better lawyer than I AM. But this was a trial much larger than the story of Judith Koplan and Valentine Guba, Kev. It had its roots in the Cold War, its ramifications all along the diplomatic front that was clearly apparent in the order to Gorbachev to leave the country with his sentence suspended. An extraordinary procedure before American law. The day of the sentencing in a restaurant across from the federal courthouse, the noontime conversation was concerned with nothing else. The phase of it that intrigues me the most and, it seems to me, provokes the most thought has been the request, apparently on behalf of the State Department, as well as on behalf of the Justice Department, to permit Gorbachev to return to his native land. And that provokes the thought or the the possible implication of some idea of reciprocity. Indeed, the Department of State was quick to confirm that it's treatment of Guba, Kev was based on the hope that there would be no Russian Reprisals against American citizens, that perhaps some Americans already in communist hands would receive the same lenient treatment. This was the administration attitude. It didn't sit well with the opposition. For example, Republican Senate leader Kenneth wary. Well, he was indignant. If there was any merit to Russia's claim that Guba chef was immune from prosecution, Mr Aitchison should have recognized it before the Russian spy was put to trial. But having asserted group of share was subject to prosecution. Mr Aitchison should have let the law take its course and not meddle with the processes of justice, A jury of American citizens found. Guba, Chef Guilty By what authority does Mr Aitchison say? Who shall go to jail and who shall go free after conviction? Sensing one person to 15 years in prison and freeing another after the same offense makes a travesty of justice. The apology of the State Department that freeing Gorbachev will spare hardship for Americans behind the Iron Curtain is indeed risky. Business Trading. Gorbachev, for an American prisoner behind the Iron Curtain does not conform to the judicial processes of the United States. It is certainly not sound public policy. Russia's friendship can
Up Next
Popular Playlists
Best Yoga Podcasts: Listen & Learn New Poses Sour Shoe's Greatest Moments on The Howard Stern Show Listen to: Top 15 Funniest Barack Obama Quotes 9 Game Design Podcasts Every Game Designer Needs to Hear 7 Podcast Episodes About The Golden State Killer That Will Keep You Up at Night David Parker Ray & Shocking Audio of the Toy Box Killer You Need to Hear Best UFO Podcasts That Will Abduct Your Mind Controversial Joe Rogan Experience Episodes Audio Wack Packer Beetlejuice Best Moments on The Howard Stern Show 12 Best Episodes of the NoSleep Podcast to Keep You Up at Night Sexy ASMR Audio to Turn You On
Popular Categories
ASMR Business & Tech Cannabis Fashion & Beauty Gaming History Home & Garden Kids & Family Spirituality Travel
Add to playlist
New playlist