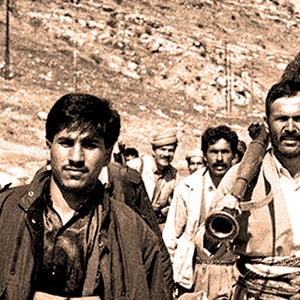 From Audio: March 22, 1991 – Shoot-Downs Over No-Fly Zone – Kurdish Rebels Gain Control In The North – Staving Off Famine In Iraq

March 22, 1991 – news for this day had much to do with the situation in Iraq. Starting with a Pentagon report that an F-15 shot down an Iraqi jet venturing into the No-Fly zone in the north. It was the second such incident th
Category: News & Politics
Publish Date: Mar 22, 2021
Snipped By:
Share
station description Past Daily: News, History, Music And An Enormous Sound Archive.

March 22, 1991 – news for this day had much to do with the situation in Iraq. Starting with a Pentagon report that an F-15 shot down an Iraqi jet venturing into the No-Fly zone in the north. It was the second such incident this week and may have had some connection with reports that Kurdish rebels were gaining the upper hand in Northern Iraq, with the capture and control of the town of Kirkuk. Initial reports said the shootdowns were in support of U.S. troops in the area. But a closer look revealed U.S. forces were well south of the area in dispute and that the shootdowns were actually in support of Kurdish rebels.

Meanwhile, the UN Security Council was scheduled to meet this day to discuss the possibilities of lifting the U.S. embargo on food shipments to Iraq. As a concession, the Iraqi’s would allow food supplies to be delivered to rebel-held areas in Iraq. The request comes after a visit by Under-secretary General Marty Adasari to Iraq, who conveyed an atmosphere of near-famine in the cities and that Iraq in general seemed to be reduced to a state of near-apocalypse as a result of heavy U.S. bombings.

And with the threat of famine came the real fear of disease as much of the water was deemed undrinkable and it made maintaining cleanliness next to impossible. The situation was deemed to be getting more critical as the Summer months were approaching and the temperatures rising could make epidemics spread rapidly throughout the region.

As a result, relief agencies were stationed in Aman, Jordan readying shipments of food and water as soon as the embargo was lifted.

And that’s just a small sample of what happened on this March 22nd, 1991 as presented by The CBS World News Roundup.

Transcripts
Back to Top
The Pentagon says the U. S F 15 shot down an Iraqi war plane flying in violation of the informal Gulf War ceasefire near Kirkuk, the northern city Kurdish rebels claim to control. It's the second shoot down this week, and reporter Jim Stewart at the Pentagon says there's a connection between the incidents and the anti Saddam uprising. The broader question is the assertion by the United States that these shootdowns are taking place to provide security for U. S forces when in actuality, the events are taking place well north several 100 miles, in fact, north of where U. S troops are located. So it seems to be a decision, a conscious decision on the part of US authorities to tie Saddam Hussein's hands so that he cannot effectively fight these rebels who are making so many inroads Now. The U. N. Security Council is due to begin action today to relax the embargo that's cut off most food shipments to Iraq. The Iraqis have reportedly agreed to allow food to reach rebel held parts of the country. U. N Under Secretary General Marti Ahtisaari
Up Next
Popular Playlists
Best Yoga Podcasts: Listen & Learn New Poses Sour Shoe's Greatest Moments on The Howard Stern Show Listen to: Top 15 Funniest Barack Obama Quotes 9 Game Design Podcasts Every Game Designer Needs to Hear 7 Podcast Episodes About The Golden State Killer That Will Keep You Up at Night David Parker Ray & Shocking Audio of the Toy Box Killer You Need to Hear Best UFO Podcasts That Will Abduct Your Mind Controversial Joe Rogan Experience Episodes Audio Wack Packer Beetlejuice Best Moments on The Howard Stern Show 12 Best Episodes of the NoSleep Podcast to Keep You Up at Night Sexy ASMR Audio to Turn You On
Popular Categories
ASMR Business & Tech Cannabis Fashion & Beauty Gaming History Home & Garden Kids & Family Spirituality Travel
Add to playlist
New playlist