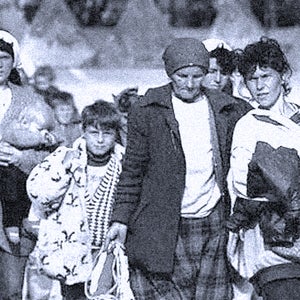 March 23, 1999 – News from Kosovo and the word was Frustration. U.S. envoy Richard Holbrook failed in last-ditch diplomacy efforts to stave off NATO’s first-ever airstrikes over Kosovo. Emerging from a two-hour session with Serbian leader Slobodan Milosevic, Holbrook expressed deep frustration that Milosevic refused to budge on his position. Meanwhile, Serbian troops were continuing their offensive in Kosovo, in an almost jubilant mood as the absence of International monitors took away the last checks on whatever the Serbs were doing. Their intention was to cut a swath through the north of the province, cutting in half the two main strongholds of the Kosovo Liberation Army guerrillas who were continuing to fight back but were seeming to lose ground. The big losers were the civilians stuck in the cross-fire, turning into refugees escaping the crossfire. At last count, some 25,000 Kosovo Albanians had been displaced since the weekend, many were still on the move.

The mood back in the U.S. was one of frustration too, as Capitol Hill was divided about committing U.S. forces against the Serbs and about the way President Clinton was handling the crisis. Some complained U.S. involvement was half-hearted and there was no clear plan in mind. Needless to say, Clinton was having a hard time selling his Kosovo policy to Congress. At the same time, Russia was accused of making matters worse by attempting to supply the Yugoslav air force with MIG’s and Pilots. Russia denied the claims.

And it was death by firing squad in Cuba today as a Tribunal handed down the sentence to a Salvadoran man who admitted to a series of hotel bombings. Raoul Ernesto Léon said he was paid $4,500 for each blast and all signs pointed to a group of Florida-based Cuban exiles for funding the series of attacks.

OPEC endorsed a cut in oil production of over 2 million barrels day to last a year. As a result, gasoline prices shot upwards in anticipation of the perceived shortage.

And that’s just a small sample of what happened this March 23rd in 1999 as reported by The CBS World News Roundup.

Transcripts
Back to Top
Holbrooke Fails in Kosovo mission These actions that are going on in Kosovo make it extraordinarily difficult to pursue peace. OPEC endorses production cut Dread continues for families of California sightseers. No matter how bad the news is, the family needs to know it. Good Tuesday morning. Bill Lynch with the CBS World News Roundup. Last ditch diplomacy appears to have failed in heading off NATO's first ever offensive action over Kosovo. As CBS News correspondent Kimberly Dozier reports live from Belgrade, US envoy Richard Holbrooke is still here. According to U. S Embassy officials, he's having lunch in between consulting with Washington about what to do next. After an apparently fruitless two hour session with the Serbian president this morning, one official close to the talks says Holbrook has not yet decided whether another face to face will do any good live in Belgrade. I'm Kimberly Dozier, CBS News in Kosovo. Meanwhile, the Serb offensive continues. These soldiers are breaking their way into a Kosovar
Up Next
Add to playlist
New playlist