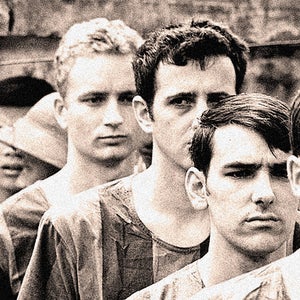 March 29, 1973 - Operation Homecoming - U.S. Withdraws From Vietnam - click the snippet for a sample.

Start Time: 00:03 End Time: 02:46
Dubbed Operation Homecoming – North Vietnam released the last of its U.S. prisoners, captured during the war and the last U.S. troops boarded planes, heading back to the States, officially ending its involvement in the Vietnam War. A group of Western reporters were invited by Hanoi to cover the rele
Category: History
Publish Date: Mar 29, 2021
Snipped By:
Share
station description Past Daily: News, History, Music And An Enormous Sound Archive.

Past Daily: News Junkies
05:49:19 11/2/20 82 audios
Up Next
Full Description
Back to Top
Dubbed Operation Homecoming – North Vietnam released the last of its U.S. prisoners, captured during the war and the last U.S. troops boarded planes, heading back to the States, officially ending its involvement in the Vietnam War. A group of Western reporters were invited by Hanoi to cover the release of the POWs and assembled outside the prison known as “The Zoo” in Hanoi, as the POWs were being made ready to be put on buses and taken to Gia Lam airport. After a briefing by a North Vietnamese official, who talked about how well the prisoners were taken care of in his camp, the reporters were taken inside the compound where the last group of POWs were being inspected by members of the Joint Military Commission. The North Vietnamese guards warned reporters and prisoners not to speak to each other, but it was largely ignored. In one cell area there was a protest – prisoners turned their backs on the visitors and were angry. It was later told the prisoners objected to the display because it wasn’t the way they lived during their captivity. All but one of the prisoners was released. The very last one, Army Captain Robert White was still being held, but officials said he was to be released the following week.

It was later revealed, after all the prisoners had been released and the Pentagon lifted restrictions on what POWs could say about conditions in the camps, that the stories were considerably different than the official reports. Newly released prisoners, arriving at Clark Airbase in the Philippines, told reporters of repeated beatings and torture to induce confessions or to make anti-War statements.

It was a historic day, and most all of this NBC Nightly News broadcast was devoted to it, this March 29, 1973.
Transcripts
Back to Top
29th of March 1973 the United States ended its active involvement in the Vietnam War. The day Americans have prayed for has finally come. This is NBC Nightly News, Thursday, March 29th Reported by John Chancellor. Mhm with David Brinkley's journal. Yes, good evening. We're going to devote most of the program tonight to the Vietnam Story because on this historic day, the last of the prisoners in the last of the American troops left Vietnam. We also today began to learn what was really done to the prisoners. And it's not a pretty story. Our correspondent, Liz Trotta, was in Hanoi today. She, along with other reporters, was invited by the North Vietnamese to come to Hanoi for one day to cover the release of the last prisoners. And hereby, satellite is her report. American Prisoner releases are big events in Hanoi, And so for the last one, with American reporters present, thousands of North Vietnamese were there. They crowded around the prison called Yeah, to do the prisoners themselves. Call it the Zoo American News Men visiting Hanoi were guided to the prison and then through the gate. They were met by a North Vietnamese official Mr Fong Wang, who talked about how well the Americans had been treated in his camp. He said they were fed meat, fruits and beer, and he said they even received medical care, such as when they would fall and hurt themselves while playing volleyball. Finally, reporters and photographers were led into the heart of the compound. There I straight ahead and standing erect with the last group of American prisoners that Hanoi was holding at this moment. About two hours before they're released. They were being inspected by members of the Joint Military Commission. Some stood in their prison cells. They looked pale and anxious. The North Vietnamese guards warned news men and the prisoners not to speak with each other, but the warning was ignored. How about you? Not about the mission and what you do. So don't worry about it. Yeah, I haven't seen any papers or anything. I don't know what happened. I have no idea. In one cell area, there was a protest. The prisoners turned their backs on the visitors, and they were angry. Later, Air Force Major William Ellender explained it. He said, We object to having our pictures taken because this isn't the way we live. He tried to say more
Up Next
Popular Playlists
Best Yoga Podcasts: Listen & Learn New Poses Sour Shoe's Greatest Moments on The Howard Stern Show Listen to: Top 15 Funniest Barack Obama Quotes 9 Game Design Podcasts Every Game Designer Needs to Hear 7 Podcast Episodes About The Golden State Killer That Will Keep You Up at Night David Parker Ray & Shocking Audio of the Toy Box Killer You Need to Hear Best UFO Podcasts That Will Abduct Your Mind Controversial Joe Rogan Experience Episodes Audio Wack Packer Beetlejuice Best Moments on The Howard Stern Show 12 Best Episodes of the NoSleep Podcast to Keep You Up at Night Sexy ASMR Audio to Turn You On
Popular Categories
ASMR Business & Tech Cannabis Fashion & Beauty Gaming History Home & Garden Kids & Family Spirituality Travel
Add to playlist
New playlist