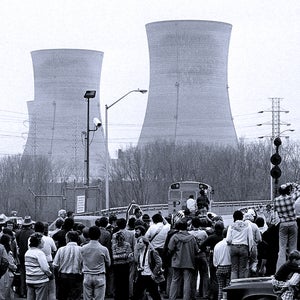 Start Time: 00:03 End Time: 02:21
March 31, 1979 – All eyes on an otherwise obscure community near Harrisburg, Pennsylvania where the Three Mile Island nuclear power plant facility was in danger of melting down, potentially turning disaster into catastrophe. The accident began on March 28th. At first hardly registering a blip on the
Category: History
Publish Date: Mar 31, 2021
Snipped By:
Share
station description Past Daily: News, History, Music And An Enormous Sound Archive.

Past Daily: News Junkies
05:49:19 11/2/20 82 audios
Up Next
Full Description
Back to Top
March 31, 1979 – All eyes on an otherwise obscure community near Harrisburg, Pennsylvania where the Three Mile Island nuclear power plant facility was in danger of melting down, potentially turning disaster into catastrophe. The accident began on March 28th. At first hardly registering a blip on the concern scale, things escalated quickly and the situation grew steadily worse by the minute. By March 31st, damage control was in full swing, with assurances by everyone from The Nuclear Regulatory Commission to the Governor’s office attempting to calm jitters and allay fears that something truly wrong was going on in Harrisburg.

Joseph Hendrie, the NRC chairman, said at a news briefing that a precautionary evacuation of residents within a 20-mile radius might be necessary if engineers are to attempt to force the bubble out of the reactor. Later, Carter announces plans to visit Three Mile Island the following day .

Schools in the area close after the advisory. Penn State Harrisburg calls off classes for a week. Many residents decide to leave the area.

Thornburgh asks President Carter to dispatch a single expert upon whom the governor could rely for advice.

Police are placed on alert and residents are told to stay indoors with windows closed and ventilating systems off. Local emergency management agency officials go on the radio to tell people what they should take with them if an evacuation is ordered.

Residents become more nervous as they try to make phone calls but hear no dial tones; lines are overloaded.

Harold Denton, the NRC troubleshooter dispatched by Carter, arrives at Three Mile Island. By now, NRC officials have realized that a hydrogen bubble has formed in the Unit 2 reactor.

Officials say there is a “remote” possibility that the bubble could force down vital cooling water, exposing the reactor core and causing a meltdown.

The Associated Press reported, based on information from several NRC sources, that the hydrogen bubble might become a potentially explosive mixture within days.

Denton assures reporters at a late evening news conference that there “is no imminent catastrophic event foreseeable.” By this evening, one-quarter of the area’s 950,000 residents have packed suitcases, withdrawn savings from banks and fled the area.

And that’s a bit of what went on this day, with many days to go and many nail-biting hours before anything resembling an end to the accident could come in sight.

Transcripts
Back to Top
experts near Harrisburg, bringing in lead bricks one step in a complicated process to solve the latest problem with a damaged fission reactor. At Three Mile Island, I'm David Jackson reporting on the CBS radio network. There's a hydrogen gas build up in the containment building in which the reactor is housed. This is not the gas bubble in the reactor core itself, but it could be dangerous. As pressure increases, the hydrogen gas becomes more explosive, and the effort now is to draw it off into a unit called a hydrogen recombine ER, which will turn the gas back into water. And so explains Nuclear Regulatory Commission's James Handset. The need for Bricks Right now there is a high priority effort to get some lead bricks to shield the hydrogen Greek combine Er, and we've overnight been able to locate several sources of these lead bricks. One source is only 20 miles away. The Navy has some, and they're going to, uh, build a shield around this recombine ER, which is in the auxiliary building in Harrisburg. Correspondent Jim Kilpatrick reports that through it all, residents are maintaining an uneasy calm. Federal officials in Pennsylvania Governor Thornburgh have assured the people. There is no immediate hazard. Radiation officials say the reactor can remain in its present state for some time without any additional danger. However, at some point early next week, a decision must be made on how to cool the reactor. There are several possibilities. Some could be hazardous. Authorities have never dealt with a situation like this before. It has all been worked out on paper and in the computer. But the repair work on the nuclear reactor with the fuel arrives damaged has never been done before. In a situation exactly like this, one of the crucial decisions will be whether to evacuate the area or not. At this point, there are no announced plans for evacuation, but that remains a serious consideration. Jim Kilpatrick, CBS News, Harrisburg. More news. In a minute, they christened her Tigris, an uncommon ship of ancient design on a mission of goodwill. Her voyage ended in an outrage of fire
Up Next
Popular Playlists
Best Yoga Podcasts: Listen & Learn New Poses Sour Shoe's Greatest Moments on The Howard Stern Show Listen to: Top 15 Funniest Barack Obama Quotes 9 Game Design Podcasts Every Game Designer Needs to Hear 7 Podcast Episodes About The Golden State Killer That Will Keep You Up at Night David Parker Ray & Shocking Audio of the Toy Box Killer You Need to Hear Best UFO Podcasts That Will Abduct Your Mind Controversial Joe Rogan Experience Episodes Audio Wack Packer Beetlejuice Best Moments on The Howard Stern Show 12 Best Episodes of the NoSleep Podcast to Keep You Up at Night Sexy ASMR Audio to Turn You On
Popular Categories
ASMR Business & Tech Cannabis Fashion & Beauty Gaming History Home & Garden Kids & Family Spirituality Travel
Add to playlist
New playlist