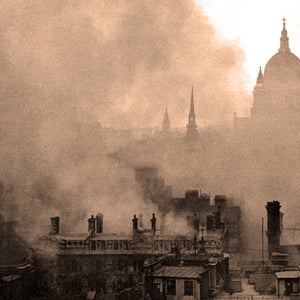 Start Time: 00:01 End Time: 01:29
May 10, 1941 – Day 615 of War – this day brought one of the worst as well as one of the last massive air raids over England by the German air force. Casualties and destruction wouldn’t be known for days if not weeks later, but the devastation was wide spread and the death toll was feared to be high.
Category: History
Publish Date: May 10, 2021
Snipped By:
Share
station description Past Daily: News, History, Music And An Enormous Sound Archive.

Past Daily: Amazing Historical Concerts & News
Tagged in this Audio:
More
Jump to Full Description Transcript
Playlists that May 10, 1941 – Raids Over London – Raids Over The Mediterranean – Day 615 Of War. Click on the snippet for a sample. appears on.
Share

Past Daily: Conflict's Greatest Hits
03:56:24 11/2/20 59 audios
Up Next
Full Description
Back to Top
May 10, 1941 – Day 615 of War – this day brought one of the worst as well as one of the last massive air raids over England by the German air force. Casualties and destruction wouldn’t be known for days if not weeks later, but the devastation was wide spread and the death toll was feared to be high.

Meanwhile, a raid by combined German and Italian planes took place over the Western Mediterranean. A large British convoy leaving Gibraltar for Alexandria was spotted by an Italian scouting plane who relayed the message to an Italian air base, scrambling pilots despite bad weather which would normally prevent such a raid from occurring. Five Italian bombers, along with a fighter escort shortly began their initial attack. The weather which consisted of high winds and limited visibility was overcome as the bombers ducked below cloud cover to begin their attack. The convoy consisted of many merchant ships, escorted by two Battleships, an aircraft carrier along with several cruisers and destroyers. Damage from this initial raid was considered light, but the initial group of planes was joined by other Italian Air Force planes as well as a group of German bombers. It was also reported German planes attacked British ships just outside of Malta. One submarine was destroyed and a torpedo boat was damaged. It was also reported Italian troops were occupying several islands in the Aegean Sea. In North Africa, artillery action was reported around the area of Tobruk. The communique continued that Italian forces in East Africa were putting up stiff resistance in the face of Allied pressure.

And that’s just a small slice of what went on, this very busy May 10, 1941, Day 615 of War in Europe as reported by NBC’s News Of The World.
Transcripts
Back to Top
today is the 615th day of war this morning. You're to hear from our staff reporters in Rome and London. First the news in Italy Go ahead Rome in D. C. This is David Anderson speaking from wrong run newspapers are still headlining the complaint, italian and german aerial attack on a british convoy which took place thursday the small island of La Goleta in the Western Mediterranean. The numerous articles telling of the attack begins very much with the same term, is that expressed by people of the Roma this morning and I quote, the indefatigable work of our Navy and Air Force is cooperate in cooperation with the german Air Force is making british navigation in the Mediterranean more difficult, unquote the large british can't boil up to baltar to sit here. Bomb for alexandria. This demonstrates consumed with the urgent necessity of the english to re furnish and reinforce their expeditionary corps in North Africa. In view of a decisive battle, it further demonstrates like to pay for the impossibility of the english to navigate the waters of the Mediterranean without sustaining considerable losses in them and materials. The convoy was cited by an italian scouting plane shortly after noon thursday, according to the reports reaching Rome, A Marconi Graham was sent immediately from the Queen despite unfavorable weather conditions, five italian bombers as.
Up Next
Popular Playlists
Best Yoga Podcasts: Listen & Learn New Poses Sour Shoe's Greatest Moments on The Howard Stern Show Listen to: Top 15 Funniest Barack Obama Quotes 9 Game Design Podcasts Every Game Designer Needs to Hear 7 Podcast Episodes About The Golden State Killer That Will Keep You Up at Night David Parker Ray & Shocking Audio of the Toy Box Killer You Need to Hear Best UFO Podcasts That Will Abduct Your Mind Controversial Joe Rogan Experience Episodes Audio Wack Packer Beetlejuice Best Moments on The Howard Stern Show 12 Best Episodes of the NoSleep Podcast to Keep You Up at Night Sexy ASMR Audio to Turn You On
Popular Categories
ASMR Business & Tech Cannabis Fashion & Beauty Gaming History Home & Garden Kids & Family Spirituality Travel
Add to playlist
New playlist