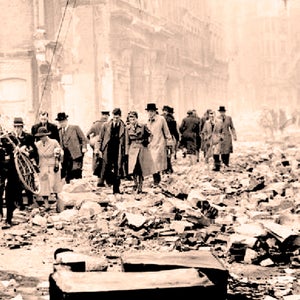 Start Time: 00:04 End Time: 01:28
May 11, 1941 – News for this 616th day of war was to start in London, but direct communication with reporters wasn’t possible. So reports via teletype were read by announcers. It was the morning after what was described as the worst raid over London in the war so far. Hundreds of German bombers drop
Category: History
Publish Date: May 11, 2021
Snipped By:
Share
station description Past Daily: News, History, Music And An Enormous Sound Archive.

Past Daily: Amazing Historical Concerts & News
Tagged in this Audio:
More
Jump to Full Description Transcript
Playlists that May 11, 1941 – London: The Morning After – Rounding Up Suspects; Guilty Or Not – Day 616 - click on the snippet for a sample. appears on.
Share

Past Daily: Conflict's Greatest Hits
03:56:24 11/2/20 59 audios
Up Next
Full Description
Back to Top
May 11, 1941 – News for this 616th day of war was to start in London, but direct communication with reporters wasn’t possible. So reports via teletype were read by announcers. It was the morning after what was described as the worst raid over London in the war so far. Hundreds of German bombers dropping thousands of bombs on the city over a period of six hours. The number of casualties wasn’t officially announced, but was only described as “high”. As morning came the city was still on fire, as smoke from incendiary bombs engulfed the horizon, turning the city into an orange/grey haze.

The raid was said to be in retaliation for British air raids on Berlin and other German cities the previous week – a pattern which would be repeated by both sides during the course of the war. Sources in London said some 33 German planes were shot down. Sources in Berlin said the raid was a success with several aircraft manufacturing plants destroyed by direct hits – in addition to the thousands of homes left in heaps of rubble. For their part, British bombers raided the German cities of Hamburg and Bremen as well as another raid on Berlin. There was no report on the size of the attacks or the extent of damage from the British raids. The Hamburg raids were said to have focused on shipyards and industrial areas.

Meanwhile, in Rome – reports of the arrest of 90 Italian citizens in New York brought a storm of protest in the press. Seems the suspects in question were working at the New York World’s Fair and had no way of getting back to Italy. One Italian newspaper proclaimed “the bellicose Americans have begun their pursuit on the Italians”. The strongest criticism came from the handling of the Italians in question. The press reported the New York Police used brutality and cameras in recording the arrests with some claimed the American authorities were going to use the photographs as proof in waging an anti-Italian campaign, promoting U.S. intervention in the European war. Another report claimed two waiters were arrested at their place of work and weren’t permitted to change out of their working clothes and receive their pay before being ushered off to Ellis Island. The Italian press were drawing similarities between this latest event and the most recent similar event involving German citizens in New York. It was all pointing up to signs of hostility from America, according to other newspaper accounts.

And that’s just a small slice of what happened, this May 11, 1941 – Day 616 of the War in Europe, as presented by NBC’s Morning News Roundup.
Transcripts
Back to Top
this morning. Our staff reporters in London and Rome, give you the latest war news 1st. We bring you the news in England. Go ahead London. Mhm. Yeah, mm hmm. Ladies and gentlemen, we are unable to bring you London Direct at this moment. Therefore, we bring you these communiques and bulletins which have just arrived. London has suffered one of the hardest raids of the war during the night. The Germans raced across the Channel in bright moonlight just after midnight, and for six hours they blasted the city without mercy, roaring fires covered whole blocks in London. And firemen had an almost impossible task in checking flames that shot through scores of buildings the German state over London until just before dawn, pouring down thousands of incendiaries and their most powerful explosives. The raid was in Reprisal for our f attacks on Berlin and other german cities friday night when daylight finally came, A grave pall of smoke hung over the battered city and there were scenes of great destruction in London. There has been no estimate of the number of persons killed, but the government has issued a communique, which says that the number of casualties is high. The British say that 33 of the German Raiders were shot down. This brings to 100 and 58 the number of Nazi war planes destroyed during the 1st 11 days of May and
Up Next
Popular Playlists
Best Yoga Podcasts: Listen & Learn New Poses Sour Shoe's Greatest Moments on The Howard Stern Show Listen to: Top 15 Funniest Barack Obama Quotes 9 Game Design Podcasts Every Game Designer Needs to Hear 7 Podcast Episodes About The Golden State Killer That Will Keep You Up at Night David Parker Ray & Shocking Audio of the Toy Box Killer You Need to Hear Best UFO Podcasts That Will Abduct Your Mind Controversial Joe Rogan Experience Episodes Audio Wack Packer Beetlejuice Best Moments on The Howard Stern Show 12 Best Episodes of the NoSleep Podcast to Keep You Up at Night Sexy ASMR Audio to Turn You On
Popular Categories
ASMR Business & Tech Cannabis Fashion & Beauty Gaming History Home & Garden Kids & Family Spirituality Travel
Add to playlist
New playlist