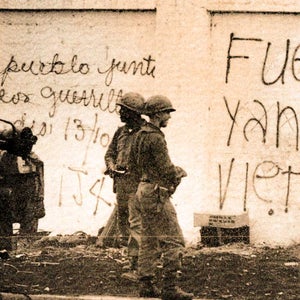 02:22
Play Audio
Add to Playlist
Share Report
News on this day, at least to the U.S., centered around a new Latin-American hotspot; The Dominican Republic. In the midst of political instability with all the earmarks of a civil war, President Johnson decided the best thing to do was intervene militarily, partly to calm an out-of-control situatio
Category: News & Politics
Publish Date: May 12, 2021
Snipped By:
Share
station description Past Daily: News, History, Music And An Enormous Sound Archive.

Past Daily: Amazing Historical Concerts & News
Tagged in this Audio:
More
Jump to Full Description Transcript
Found on these Playlists
Full Description
Back to Top
News on this day, at least to the U.S., centered around a new Latin-American hotspot; The Dominican Republic. In the midst of political instability with all the earmarks of a civil war, President Johnson decided the best thing to do was intervene militarily, partly to calm an out-of-control situation, but mostly to “prevent another Cuba” as Chief of Staff, General Wheeler put it, hoping to prevent another Communist takeover.

So Operation Power Pack was launched on April 29th with an invasion of The Dominican Republic by U.S. Marines, with some 42,000 U.S. troops eventually landing on the island.

So the news for May 12, 1965 was about the ongoing crisis and attempts by all sides to come to some conclusion. Meanwhile,fighting was continuing and the targets were now U.S. troops. Needless to say, our decision to send in the Marines was perceived by many as a power-grab of a country going through an internal crisis. Our wisdom of committing troops to the crisis was questioned, particularly since things were rapidly spiraling out of control in Southeast Asia, and it was feared our military would be stretched thin.

But we were still very much entrenched in a Cold War, and the specter of Cuba loomed large in our Foreign policy toward Latin America. And since the Cuban Missile Crisis of 1962 was only three years earlier, there were still echoes of “A Communist toehold in the Western Hemisphere“, and it was a driving force in many foreign policy decisions with respect to that region.

But on this day, it was about U.S. Marines engaging rebels in Santo Domingo, prompting one Marine to remark “It’s just like Dodge City“.

And it was. And that’s how it went this May 12th in 1965 as reported by ABC Radio News and one of several Special Reports given during the crisis.
Transcripts
Back to Top
This is a special report from abc Radio news, the news department of the Abc Radio network presents the johnson doctrine. A Dominican update. A third special report on the crisis in the Dominican republic with abc correspondent Don Gardner and Wally, bruner, Merwin Saigal and bob funk in santo domingo ted koppel at Kennedy airport in new york and john scaly in London. Here is Don Gardner For 16 days. United States Marines and troops of the 82nd Airborne Division had been on duty in the Dominican Republic while diplomats talked at the United Nations, in the organization of american states and in the Dominican republic, the streets of santa Domingo echoed to the sounds of war in 1 24 hour period ending today. The 80 seconds paratroopers were involved in eight shooting incidents. In the first two weeks, rebel snipers Have killed 18 Americans. Listen closely, this was the sound of battle in Santa Domingo. The lieutenant is dead. Sir, he was right across the street from where they blow his head off another Stephanie has a single blow them and hit. Ok. Just take care of this man. I'm okay. He's hurt bad down there. Just one He'll live though. No blood and chicken head. What are they going to go out and get my command? Do you get that so they can see you from that corner and see what the white finishes? Yeah, yeah, no, no, no, no, no, no. That guy's equity will hit you, man. Get back. He had number my see that. Where's the lieutenant went into my mouth. Where's the lieutenant chips getting bullied? Didn't get shot. They got it out. That's good.
Up Next
Add to playlist
New playlist