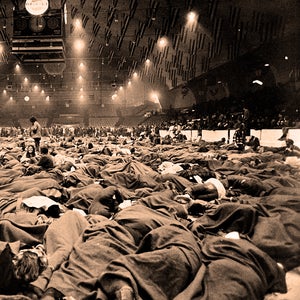 Start Time: 00:02 End Time: 02:50
May 3, 1971 – The day some 7,000 anti-war demonstrators were arrested outside the Washington Monument and at various points during the mass demonstration, intent on shutting down the entire city. Numbers of those taking part were estimated at over 10,000 while Police, Federal Troops and other armed
Category: History
Publish Date: May 03, 2021
Snipped By:
Share
station description Past Daily: News, History, Music And An Enormous Sound Archive.

Past Daily: Amazing Historical Concerts & News
Tagged in this Audio:
More
Jump to Full Description Transcript
Playlists that May 3, 1971 – The Day They Arrested 7,000 Demonstrators In Washington D.C. - click on the snippet for a sample. appears on.
Share

Past Daily: News Junkies
05:49:19 11/2/20 82 audios
Up Next
Full Description
Back to Top
May 3, 1971 – The day some 7,000 anti-war demonstrators were arrested outside the Washington Monument and at various points during the mass demonstration, intent on shutting down the entire city. Numbers of those taking part were estimated at over 10,000 while Police, Federal Troops and other armed Military personnel numbered over 10,000. The sheer number of those arrested quickly packed the city jails – the overflow of arrested demonstrators were herded into football stadiums, baseball fields and indoor arenas where they were processed and booked. It was the single largest mass arrest of protestors in U.S. history and the manner in which those who were arrested were taken into custody brought storms of indignation and cries of “Gestapo” to those wielding clubs and firing teargas canisters, while President Nixon congratulated the Police on their handling of the situation. Estimates ranged up to three days for all the arrested to be processed. And despite the mass arrests, which included Rennie Davis, one of the leaders of the march, protest spokespeople said there would be more to come the following days.

Meanwhile, the results of a new national public opinion poll were released. The survey polled more than 1800 households across the country two weeks earlier and found that 60% of those questioned supported the continued troop withdrawal of American troops from Vietnam, even if the South Vietnamese government collapsed. And 58% said it was morally wrong to be fighting in Vietnam. It compared with an earlier Gallup poll which put the number at 73% favoring continued troop withdrawal and wanted all the troops out by the end of the year.

And East Germany’s Walter Ernst Karl Ulbricht, resigned as First Secretary of the East German Communist Party Central Committee this day. Ulbricht gave his aides his age (77 years) as his reason for stepping aside. Ulbricht had run East Germany since 1950. Erich Honecker was slated to succeed Ulbricht.

And that’s a little of what went on, this rather momentous 3rd day of May in 1971, as reported by NBC Nightly News.

Transcripts
Back to Top
new york. And in Washington john Chancellor, good evening. More than 10,000 anti war demonstrators tried to shut down Washington D. C. They failed, but it was a memorable day here. The Washington police backed up by 10,000 soldiers and marines have so far arrested more than 7000 demonstrators, including one of their leaders, Rennie Davis. The demonstrators tried to close the bridges leading into the city this morning. Some commuters were late, but the government says everybody got to work and President Nixon has congratulated the police. They were there before dawn federal troops in Washington's four bridges across the Potomac River. The demonstrators have planned to close them down. It was a major objective, but except for a few brief moments they fail at points scattered throughout the city. The protesters used hit and run tactics to block traffic. They had limited success. There were some delays of up to an hour, but police were generally effective in preventing a major traffic jams. Okay. Yeah, yeah, yeah, yeah. Police cleared away cars abandoned by demonstrators. Come on, get that. Well, no, uh
Up Next
Popular Playlists
Best Yoga Podcasts: Listen & Learn New Poses Sour Shoe's Greatest Moments on The Howard Stern Show Listen to: Top 15 Funniest Barack Obama Quotes 9 Game Design Podcasts Every Game Designer Needs to Hear 7 Podcast Episodes About The Golden State Killer That Will Keep You Up at Night David Parker Ray & Shocking Audio of the Toy Box Killer You Need to Hear Best UFO Podcasts That Will Abduct Your Mind Controversial Joe Rogan Experience Episodes Audio Wack Packer Beetlejuice Best Moments on The Howard Stern Show 12 Best Episodes of the NoSleep Podcast to Keep You Up at Night Sexy ASMR Audio to Turn You On
Popular Categories
ASMR Business & Tech Cannabis Fashion & Beauty Gaming History Home & Garden Kids & Family Spirituality Travel
Add to playlist
New playlist