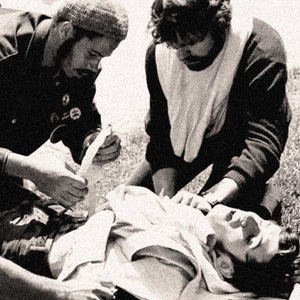 Start Time: 00:04 End Time: 02:58
Many have said the events outside the 1968 Democratic Convention in Chicago started the shift in national opinion of the War in Vietnam. The events at Kent State (and a few days later at Jackson State) 45 years ago today, solidified that shift, and the killing of 4 students by National Guard troops
Category: History
Publish Date: May 04, 2021
Snipped By:
Share
station description Past Daily: News, History, Music And An Enormous Sound Archive.

Past Daily: Amazing Historical Concerts & News
Tagged in this Audio:
More
Jump to Full Description Transcript
Playlists that May 4, 1970 – Kent State – The Day America Killed Its Young - click on the snippet for a sample. appears on.
Share

Past Daily: News Junkies
05:49:19 11/2/20 82 audios
Up Next
Full Description
Back to Top
Many have said the events outside the 1968 Democratic Convention in Chicago started the shift in national opinion of the War in Vietnam. The events at Kent State (and a few days later at Jackson State) 45 years ago today, solidified that shift, and the killing of 4 students by National Guard troops galvanized it.

It also displayed the stark division taking place in our society – between those supporting the War and those demanding we get out. A division which continues among those who demand we settle our difference through violence and those who say peaceful settlement is the only option.

A lot has been written about this incident; it’s been the subject of investigations, and many correlations have been drawn between those events at Kent and Jackson State with those taking place recently in our country and those which continue and will probably continue until a sense of reason is introduced..

But on May 4, 1970 the country reacted with shock that this protest against the War in Vietnam, and the recent decision by President Nixon to invade Cambodia, had taken us this far.

Nixon was elected in 1968 on the grounds he would end the war in Vietnam. The decision to invade Cambodia ran against that promise, and in fact was widening the War in Southeast Asia. It triggered a series of protests, beginning shortly after his announcement of the invasion on April 30th.

Other news happened this day, as it always does. But the attention of the country was focused on Kent State University in Ohio and the sudden turn of events unfolding this day.

Here is that newscast, via NBC Nightly News as it was broadcast on May 4, 1970.
Transcripts
Back to Top
university in Ohio has that campus violence for three nights causing the National Guard to be called in. And today the guardsmen opened fire on the student's, killing four of them, two young men and two young women, Three were shot in the chest and one in the head. A dozen or more others were wounded, some by gunfire and some by bayonets. The university is closed in. All faculty and students have been sent home. The students were protesting the american invasion of cambodia. The National Guard was called in over the weekend by Ohio governor James Rhodes. Today when 1500 students started an anti war rally on the university commons, the guardsmen surrounded them. Then when some students started throwing rocks, the guard moved in with tear gas. No the students were forced up a hill by the tear gas. Some of them started throwing gas canisters back at the guardsmen. Others threw rocks. Mhm. Yeah. Mhm. Can you give me then a formation of guardsmen marched up the hill and fired their rifles at the students? Oh yeah. Mhm. Yeah. Right. Two young men and two young women were killed and at least a dozen other students were wounded. It took university officials two hours to disperse the students. Then the university was closed for the remainder of the week. The guard has sealed off the city. Assistant Adjutant General Frederick Winder said later the guardsmen did not open fire until after they came under sniper fire themselves. Governor Rhodes has asked FBI director J. Edgar Hoover to investigate the shooting. Freddie brian NBC news reporting. The National Students Association called for a shutdown of all university campuses in all states to protest the Cambodian war. Father Theodore Hesburgh, president of Notre Dame University spoke to a student rally and said his reaction to the invasion was revulsion, but said he didn't want and would not accept any kind of student strike
Up Next
Popular Playlists
Best Yoga Podcasts: Listen & Learn New Poses Sour Shoe's Greatest Moments on The Howard Stern Show Listen to: Top 15 Funniest Barack Obama Quotes 9 Game Design Podcasts Every Game Designer Needs to Hear 7 Podcast Episodes About The Golden State Killer That Will Keep You Up at Night David Parker Ray & Shocking Audio of the Toy Box Killer You Need to Hear Best UFO Podcasts That Will Abduct Your Mind Controversial Joe Rogan Experience Episodes Audio Wack Packer Beetlejuice Best Moments on The Howard Stern Show 12 Best Episodes of the NoSleep Podcast to Keep You Up at Night Sexy ASMR Audio to Turn You On
Popular Categories
ASMR Business & Tech Cannabis Fashion & Beauty Gaming History Home & Garden Kids & Family Spirituality Travel
Add to playlist
New playlist