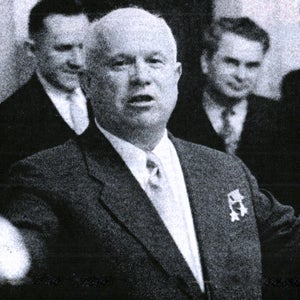 Start Time: 00:04 End Time: 04:01
May 5, 1960 – The much anticipated summit in Paris between Nikita Khrushchev and President Eisenhower. The Summit that ultimately did not happen – the Summit that managed to place the Cold War on freeze.

An international diplomatic crisis erupted in May 1960 when the The Soviet Union shot down an A
Category: History
Publish Date: May 05, 2021
Snipped By:
Share
station description Past Daily: News, History, Music And An Enormous Sound Archive.

Past Daily: Amazing Historical Concerts & News
Jump to Full Description Transcript
Playlists that May 5, 1960 – The Summit That Wasn’t – Khrushchev And The U2 Incident – click on the snippet for a sample. appears on.
Share

Past Daily: Conflict's Greatest Hits
03:56:24 11/2/20 59 audios
Up Next
Full Description
Back to Top
May 5, 1960 – The much anticipated summit in Paris between Nikita Khrushchev and President Eisenhower. The Summit that ultimately did not happen – the Summit that managed to place the Cold War on freeze.

An international diplomatic crisis erupted in May 1960 when the The Soviet Union shot down an American U-2 spy plane in Soviet air space and captured its pilot, Francis Gary Powers. Confronted with the evidence of his nation’s espionage, President Eisenhower (was forced to admit to the Soviets that the CIA had been flying spy missions over the USSR for several years.

Winging through the thin atmosphere at the edge of space, Powers was carrying out the type of top-secret mission he specialized in: flying a U-2 spy plane over the USSR to photograph military installations. If all had gone according to plan, Powers’ nine-hour flight would have taken him from Pakistan to a landing zone in Norway. Unlike previous U-2 missions, however, this one went terribly wrong.

As Powers flew over Sverdlovsk, a Soviet surface-to-air missile exploded near his plane, causing it to drop to a lower altitude. A second missile scored a direct hit, and Powers and his aircraft began to plummet from the sky. The pilot managed to bail out, but when his parachute floated to earth, he was surrounded by Soviet forces. Powers landed in the center of a major diplomatic crisis.

On May 5, Khrushchev announced that the Soviet military had brought down an American spy plane, but he made no mention of capturing Powers. Officials in the Eisenhower administration believed that little evidence of the plane’s espionage mission had survived the crash, so they responded that the aircraft was merely a weather plane that had accidentally flown off course. The Soviet leader quickly disproved that story, however, by producing a photograph of the imprisoned pilot as well as evidence recovered from the wreckage that conclusively showed it was a surveillance aircraft.

Before the world leaders opened their Paris meeting, the Eisenhower administration took responsibility for the spy flights and admitted that the weather plane explanation was false. But the president’s confession could not save the summit. The U-2 incident had convinced Khrushchev that he could no longer cooperate with Eisenhower, and the Soviet leader walked out of the Paris meeting just hours after it began.

As the incident was unfolding, news organizations scrambled to cover the story, and this report via CBS Radio was being delivered while the crisis was in full swing. Here is Paris Summit: What Happened, as it was broadcast on May 5, 1960.
Transcripts
Back to Top
You're listening to the angry shots of Nikita Khrushchev but one of the largest and most extraordinary news conferences of all time for two hours and 20 minutes at the palais de Tokyo and paris Khrushchev slashed and attack the Western powers in a massive attempt to shift all blamed for the collapse of the summit talks. Good evening, everybody coast to coast Douglas Edwards reporting. We'll have more on that historic news conference in just a moment tonight. They booed Khrushchev on the streets of paris this morning as he paid farewell courtesy calls to french president to goal and british Prime Minister Macmillan and then to as he headed for his news conference that set the mood, he slashed out at the United States saying that there will be war of more american planes are sent over Russian territory. Yes, he said he does intend to sign a separate peace treaty with East Germany and he wouldn't say when he was booed by part of his audience and he promptly said that the Boers were nothing but riffraff and plunderers sent to paris by german Chancellor, Konrad Adenauer. He said he liked being booed by what he called lackeys of imperialism. The soviet premier was flanked by Foreign Secretary Andrei Gromyko and Defense Secretary Rodion Malinowski as he spoke and Khrushchev shouted, No one shall intimidate the soviet union, we shall not be broken. Khrushchev often resorted to biting little parables and anecdotes to make his point today. Like this time when a reporter asked him why he didn't discuss the U two incident with Mr Eisenhower at the summit, an interpreter answers. Ladies and gentlemen, we all have mothers. You all do too. Otherwise you couldn't have come into this world. I remember during my youth I was born in a very poor family and it is only very rarely that my mother could buy us some cream. But sometimes when she did, our cat would creep up and eat some of the cream would steal some of the cream. Then my mother usually took the cat by the scruff of the neck and gave it a good shaking and in the end would poke it um, nose into, into the cream to make it understand that such a ceiling was not allowed. Wouldn't it be better. Ladies and gentlemen too, give the american aggressors to take the americans aggressive by the scruff of the neck also and give them a little shaking and make them understand, but they must not commit such acts of aggression against the soviet union. He also resorted to anecdotes when asked why he hadn't talked to the president about us flights over Russia. When he met him at Camp David. When we were talking in Camp David with President Eisenhower, I almost opened my mouth to, to say to make that statement. I was on the point of making it because the atmosphere, there was broken video and with President Eisenhower calling me, telling me to call him my friend in english and calling me using the same word with regard to myself in in Russian. And then I thought I why not raise the matter with this friend of mine? But then I became apprehensive. I thought there was something fishy about this friend of mine and I didn't broach the subject. And it turned out that I was right because when we caught them red handed, uhh, they say that they're not these, it's just, there seems like quality, that's all. Uhh, this recalled to my mind what we used to do in the Donbass when I was a young boy. Whenever we caught a cat in a pigeon's lot, we would
Up Next
Popular Playlists
Best Yoga Podcasts: Listen & Learn New Poses Sour Shoe's Greatest Moments on The Howard Stern Show Listen to: Top 15 Funniest Barack Obama Quotes 9 Game Design Podcasts Every Game Designer Needs to Hear 7 Podcast Episodes About The Golden State Killer That Will Keep You Up at Night David Parker Ray & Shocking Audio of the Toy Box Killer You Need to Hear Best UFO Podcasts That Will Abduct Your Mind Controversial Joe Rogan Experience Episodes Audio Wack Packer Beetlejuice Best Moments on The Howard Stern Show 12 Best Episodes of the NoSleep Podcast to Keep You Up at Night Sexy ASMR Audio to Turn You On
Popular Categories
ASMR Business & Tech Cannabis Fashion & Beauty Gaming History Home & Garden Kids & Family Spirituality Travel
Add to playlist
New playlist