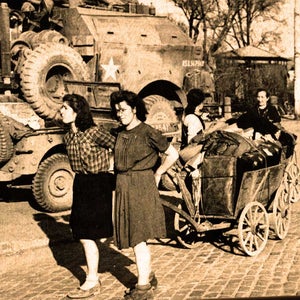 Start Time: 00:01 End Time: 01:28
As the world waited for news that Germany had finally, unconditionally surrendered, news was filtering in of mass surrenders, and how pockets of resistance were only going on in two places. How it was only a matter of hours before the War in Europe would be over.

And then there was news of the othe
Category: History
Publish Date: May 06, 2021
Snipped By:
Share
station description Past Daily: News, History, Music And An Enormous Sound Archive.

Past Daily: Amazing Historical Concerts & News
Jump to Full Description Transcript
Playlists that May 6, 1945 – A Hazy Light At The End Of The Tunnel – A Matter Of Refugees. Click on the snippet for a sample. appears on.
Share

Past Daily: Conflict's Greatest Hits
03:56:24 11/2/20 59 audios
Up Next
Full Description
Back to Top
As the world waited for news that Germany had finally, unconditionally surrendered, news was filtering in of mass surrenders, and how pockets of resistance were only going on in two places. How it was only a matter of hours before the War in Europe would be over.

And then there was news of the other crisis looming – the refugees. Already streaming out of Germany by the hundreds of thousands, refugees were clogging roads and highways throughout Europe. The displaced, the homeless, the survivors of Concentration Camps – they were all heading somewhere, and not exactly sure of where.

But on this 6th of May in 1945 (a Sunday), last minute bulletins and the holding of breath, and the beginnings of looking back on the conflict during the early days was what the news was about. And of course, the waiting.

And that’s what this day sounded like, May 6th 1945 as reported by Paul Manning via shortwave from Paris.

Transcripts
Back to Top
Well here, paul Manning reporting from paris. The latest news from the european war fronts and the human highlights behind the news. Mr Manning, brilliant young war correspondent and commentator is brought to you by the Sperry Corporation on behalf of Sperry Gyroscope company. Vickers Incorporated Forward instrument company and the Waterbury tool division of Vickers Incorporated every sunday morning at 11 paul Manning reports. The news of the fighting front to the men and women of Sperry and their fellow workers on the home front. And now here is paul Manning has just transcribed here in new york with the news and the human highlights behind the news. This is paul Manning speaking from paris today, the unconditional surrender of all german forces in Northwest Germany becomes effective. There will be no more hostilities in Holland, Denmark, the Frisian islands. Hello garland in North Germany, this is the surrender which was so dramatically announced friday by Field Marshal Montgomery. And this morning Germans are streaming back into the british lines by the tens of thousands. It is the same in other parts of Germany, where yesterday to full German army signed these terms demanded by General Devers, who was commander of the sixth American army group, there are now only two large areas of german resistance Norway, where an estimated 150 to 200,000 troops hold out and Czechoslovakia.
Up Next
Popular Playlists
Best Yoga Podcasts: Listen & Learn New Poses Sour Shoe's Greatest Moments on The Howard Stern Show Listen to: Top 15 Funniest Barack Obama Quotes 9 Game Design Podcasts Every Game Designer Needs to Hear 7 Podcast Episodes About The Golden State Killer That Will Keep You Up at Night David Parker Ray & Shocking Audio of the Toy Box Killer You Need to Hear Best UFO Podcasts That Will Abduct Your Mind Controversial Joe Rogan Experience Episodes Audio Wack Packer Beetlejuice Best Moments on The Howard Stern Show 12 Best Episodes of the NoSleep Podcast to Keep You Up at Night Sexy ASMR Audio to Turn You On
Popular Categories
ASMR Business & Tech Cannabis Fashion & Beauty Gaming History Home & Garden Kids & Family Spirituality Travel
Add to playlist
New playlist