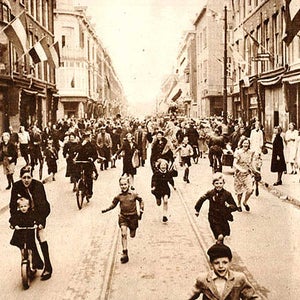 May 7, 1945 – ‘Suddenly The War Just Melted Away Into Nothingness’ – Jumping The Gun On VE Day. Click on the snippet for a sample.

From Audio: May 7, 1945 – ‘Suddenly The War Just Melted Away Into Nothingness’ – Jumping The Gun On VE Day.

Start Time: 00:01 End Time: 01:30
News for this May 7th in 1945 was confusing at best. Word got out that the Germans had unconditionally surrendered and that the War in Europe was finally over. News spread and celebrations broke out all over Europe and Britain.

Ticker-tape started flying in New York City. The celebration was on.

Past Daily: Amazing Historical Concerts & News
Tagged in this Audio:
More
Jump to Full Description Transcript
Playlists that May 7, 1945 – ‘Suddenly The War Just Melted Away Into Nothingness’ – Jumping The Gun On VE Day. Click on the snippet for a sample. appears on.
Share

Past Daily: Conflict's Greatest Hits
03:56:24 11/2/20 59 audios
Up Next
Full Description
Back to Top
News for this May 7th in 1945 was confusing at best. Word got out that the Germans had unconditionally surrendered and that the War in Europe was finally over. News spread and celebrations broke out all over Europe and Britain.

Ticker-tape started flying in New York City. The celebration was on.

Except for one thing – the surrender wasn’t quite official, the fighting wasn’t quite over and whoever broke the story did it without waiting for official word from Allied Headquarters. And even though news reports were saying it was official, there was no confirmation from The White House, Number 10 Downing Street or The Kremlin.

But during this newscast, 11:00 in the morning of May 7th, WOR Radio reported what they heard from Associated Press. Even though there was an air of caution to the report, it was still hard to contain the excitement that, after six years the War in Europe was over.

However – Edward Kennedy, the Paris bureau chief for the Associated Press, in fact broke a 36-hour restriction against publishing the news set by the Supreme Headquarters Allied Expeditionary Force, bringing the wrath of the brass and his fellow reporters down on him.

There was still the War in the Pacific to deal with, and even though there was an air of celebration, it still didn’t feel like it was completely over.

Within a few hours of this newscast, revised reports came in that it was not “official” and no word had come out to say otherwise.

So with fits and starts, going back to the end of April, news the war in Europe was finally over had to wait one more day.

They didn’t seem to care in places like Rotterdam or Paris – unofficial word was better than no word.

And that’s how this day went, May 7th 1945 as reported on the 11:00 am News from WOR Radio in New York.
Transcripts
Back to Top
11 a. M. B. U. L. O. V. A Bull of a watch time, Bull of a gift of a lifetime. Yeah. Yeah, it's 11 a.m. Monday may 7th and this is Prescott Robinson with 15 minutes of the latest news from the W. O. R. Newsroom presented by the makers of Wilbert famous no rub floor wax. Well, it has been announced officially at Supreme Headquarters that Germany has surrendered unconditionally on all fronts and to all the allies, the United States, great Britain soviet Russia and France. We repeat. This was officially announced this morning at General Eisenhower's headquarters. The Germans signed the papers by which they laid down their arms at 19 minutes before three o'clock this morning french time in a little red schoolhouse at Reims France. That's where General like has his headquarters. The document whereby Germany gave up the military fight it launched five years, eight months and six days ago was signed by Colonel General Gustav Yodel. The German Army Chief of Staff, Lieutenant General, walter bedell Smith. General Eisenhower's Chief of Staff, signed in behalf of the Allied high command general. Even suits Lapa rov signed for the Russians and General francois Savary for France. General Eisenhower was not present at the signing, but right after it was over, he received Yodel and the other german surrender delegate, General Admiral Hans Frida bork. They were asked solemnly and sternly if they understood the terms that were being imposed on Germany and if they would be carried out by the judge.
Up Next
Popular Playlists
Best Yoga Podcasts: Listen & Learn New Poses Sour Shoe's Greatest Moments on The Howard Stern Show Listen to: Top 15 Funniest Barack Obama Quotes 9 Game Design Podcasts Every Game Designer Needs to Hear 7 Podcast Episodes About The Golden State Killer That Will Keep You Up at Night David Parker Ray & Shocking Audio of the Toy Box Killer You Need to Hear Best UFO Podcasts That Will Abduct Your Mind Controversial Joe Rogan Experience Episodes Audio Wack Packer Beetlejuice Best Moments on The Howard Stern Show 12 Best Episodes of the NoSleep Podcast to Keep You Up at Night Sexy ASMR Audio to Turn You On
Popular Categories
ASMR Business & Tech Cannabis Fashion & Beauty Gaming History Home & Garden Kids & Family Spirituality Travel
Add to playlist
New playlist