Your changes have been saved
All Audio Weird Darkness: Stories of the Paranormal, Supernatural, Legends, Lore, Mysterious, Macabre, Unsolved 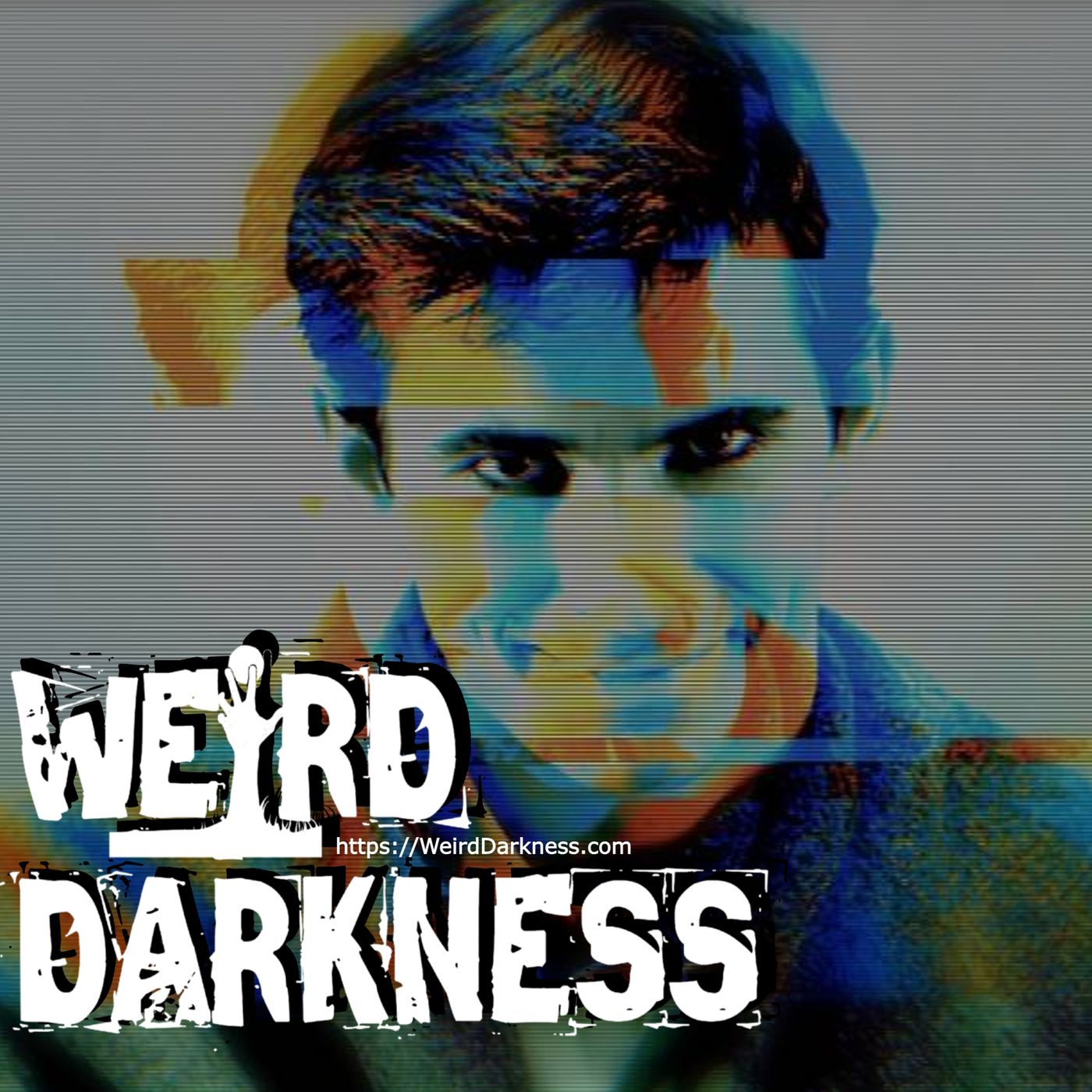 Like the podcast on Facebook – https://facebook.com/weirddarkness, join the Weirdos Facebook Group – https://facebook.com/groups/marlarhouse, and sign up for the fee email newsletter - https://weirddarkness.com/newsletter! Please SHARE Weird Darkness with someone who loves paranormal stories, true
Category: Society & Culture
Publish Date: Jul 11, 2021
Tagged in this Audio:
More
Jump to Full Description
Snippets are a new way to share audio!
You can clip a small part of any file to share, add to playlist, and transcribe automatically. Just click the to create your snippet!
Snippets: Clips of “MEET ‘NORMAN’ THE A.I. PSYCHOPATH” and 4 More Disturbing True Horror Stories! #WeirdDarkness that people like
Add to Playlist
Share

There are currently no playlists containing this audio.
Add this audio track to one of your playlists
Add to Playlist
Up Next
Full Description
Back to Top
Like the podcast on Facebook – https://facebook.com/weirddarkness, join the Weirdos Facebook Group – https://facebook.com/groups/marlarhouse, and sign up for the fee email newsletter - https://weirddarkness.com/newsletter! Please SHARE Weird Darkness with someone who loves paranormal stories, true crime, monsters, or unsolved mysteries like you do! Recommending the show to others helps make it possible for me to keep doing the show!IN THIS DARKIVE EPISODE WITH STORIES FROM JULY 2018: A neural network named "Norman" is disturbingly different from other types of artificial intelligence. How? Well, for one… it’s a psychopath. (Meet Norman, The Artificially Intelligent Psychopath) *** Twenty high school students all lost consciousness and collapsed under mysterious circumstances during class on Tuesday, July 3. Was it mass hysteria? Juju in Ghana? Or did the students actually see ghosts as they claim? (Ghana Students Faint After Seeing Ghosts) *** At a young age, Edmund Kemper decapitated his sisters' dolls and even stalked his second-grade teacher with a bayonet. But he was young and just getting started. (Serial Killer Edmund Kemper) *** During the Second World War, in the gruesome world of Unit 731, the unthinkable was done on a daily basis. Prisoners, were subjected to unimaginable horrors. Today, ghostly voices are heard and anomalies frequently appear in photographs. (Unit 731) *** Ion Rimaru is a murderer like no other – vampirism, cannibalism, necrophilia – and why shouldn’t he? After all, he’s taking after his serial killer father. (The Disturbing Crimes of a Father and Son)SOURCES AND ESSENTIAL WEB LINKS…“Ghana Students Faint After Seeing Ghosts” by Sequoya Kennedy: http://bit.ly/2oqghUU “Serial Killer Edmund Kemper” by Gabe Paoletti: http://bit.ly/2nDRLiF “Unit 731”: http://bit.ly/2nGqXyg “The Disturbing Crimes of a Father and Son” by Les Hewitt: http://bit.ly/2nG8phK “Meet Norman, The Artificially Intelligent Psychopath” by Mindy Weisberger: http://bit.ly/2m8n2d7 Weird Darkness theme by Alibi Music Library. Background music provided by Alibi Music, EpidemicSound and/or AudioBlocks with paid license. Music from Shadows Symphony (https://tinyurl.com/yyrv987t), Midnight Syndicate (http://amzn.to/2BYCoXZ), Kevin MacLeod (https://tinyurl.com/y2v7fgbu), Tony Longworth (https://tinyurl.com/y2nhnbt7), and/or Nicolas Gasparini/Myuu (https://tinyurl.com/lnqpfs8) is used with permission.   = = = = = = = = = = = = = = = = = = = = = = = = = = = = = =(Over time links seen above may become invalid, disappear, or have different content. I always make sure to give authors credit for the material I use whenever possible. If I somehow overlooked doing so for a story, or if a credit is incorrect, please let me know and I will rectify it in these show notes immediately. Some links included above may benefit me financially through qualifying purchases.)= = = = = = = = = = = = = = = = = = = = = = = = = = = = = =WANT TO ADVERTISE ON WEIRD DARKNESS?Weird Darkness has partnered with AdvertiseCast to handle our advertising/sponsorship requests. They’re great to work with and will help you advertise on the show. Email <a...
Snippet Transcripts

The Mystery of Mass Hysteria
14:35-17:59
Is it mass hysteria or another case of juju in Ghana. Is there a difference? According to Daily Guide Africa, 20 high school students lost consciousness and collapsed under mysterious circumstances during class this week, Tuesday july 3rd, the affected students had complained about seeing ghosts including the spirits of classmates who had died before collapsing, according to classmates. The incident occurred at an angle a senior high school in Akron. On Tuesday morning. The group of students all seemingly collapsed and lost consciousness at the same time. Whether it was instantaneous or just roughly at the same time was not stated. There seemed to be no material cause for the students collapse and they were rushed to the nearby Lacma Hospital where they were being treated. According to the Guide doctors at Lacma Hospital have attributed the bizarre event to mass hysteria. Yet at least the claims of a paranormal aspect have been corroborated. Dr joseph Oliver Comey who is treating the students at Lacma hospital says they rushed to the emergency room with some behaving abnormally. But we found out that most of them were suffering from hysteria. They said they had seen things. Some seeing ghosts, some seeing other students who are dead. We can't work with that as clinicians. So we have managed them. They are currently very stable and they are Waiting to see the clinical psychologist we've seen close to 18 students and we're observing three others by the end of the day will hand them over to the school authorities who are still here. It's a tough nut to crack if they had indeed seen visions of spirits including someday no and then lost consciousness and collapsed, seeming a little hysterical after the fact is probably pretty normal. Of course in a place where there is a real fear and belief in juju and the paranormal. Seeing one or two of your friends collapsed from mundane causes like heat exhaustion or any of the other myriad reasons that people pass out could very well trigger a cascade of panic attacks, resulting in more collapsing and more panic. Mass hysteria is one of those catch all terms to describe bizarre things that no one understands. It's not a disease in the regular sense. Having been blamed for both events like this as well as events like the Salem witch trials. Although that is very much debated, it has still been considered a possible cause which was an entirely different type of event. It seems like mass hysteria is just an easy thing to say. When a group of people claimed to have experienced something out of the norm, strangely this isn't the first time this has happened. A very Similar event took place in Tanzania in 2008 when 20 girls all rapidly fell unconscious during school. Other mass collapses have been reported all over the world as well. Maybe mass hysteria is the right term. Sometimes groups of people do just completely lose their minds all at once. Does that make it any less strange? Would that be an argument against the paranormal or in favor of it? It's hard to tell.
Up Next
Popular Playlists
Best Yoga Podcasts: Listen & Learn New Poses Sour Shoe's Greatest Moments on The Howard Stern Show Listen to: Top 15 Funniest Barack Obama Quotes 9 Game Design Podcasts Every Game Designer Needs to Hear 7 Podcast Episodes About The Golden State Killer That Will Keep You Up at Night David Parker Ray & Shocking Audio of the Toy Box Killer You Need to Hear Best UFO Podcasts That Will Abduct Your Mind Controversial Joe Rogan Experience Episodes Audio Wack Packer Beetlejuice Best Moments on The Howard Stern Show 12 Best Episodes of the NoSleep Podcast to Keep You Up at Night Sexy ASMR Audio to Turn You On
Popular Categories
ASMR Business & Tech Cannabis Fashion & Beauty Gaming History Home & Garden Kids & Family Spirituality Travel
Add to playlist
New playlist