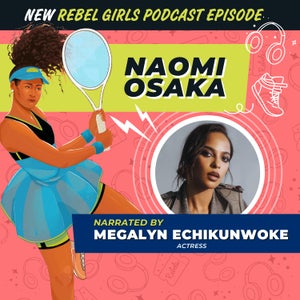 Once upon a time, there was a girl from Japan with arms so strong she could serve a tennis ball at more than 120 miles per hour. Her name is Naomi Osaka - a powerful professional tennis player who has taken the sport by storm and has become an advocate for mental health. Naomi has been ranked No. 1
Category: Kids & Family
Publish Date: Oct 05, 2021
Tagged in this Audio:
More
Jump to Full Description
Snippets are a new way to share audio!
You can clip a small part of any file to share, add to playlist, and transcribe automatically. Just click the to create your snippet!
Snippets: Clips of Naomi Osaka Read by Megalyn Echikunwoke that people like

There are currently no playlists containing this audio.
Add this audio track to one of your playlists
Add to Playlist
Up Next
Full Description
Back to Top
Once upon a time, there was a girl from Japan with arms so strong she could serve a tennis ball at more than 120 miles per hour. Her name is Naomi Osaka - a powerful professional tennis player who has taken the sport by storm and has become an advocate for mental health. Naomi has been ranked No. 1 by the Women's Tennis Association and is the first Asian player to hold the top ranking in singles.About the NarratorMegalyn Echikunwoke is an actor, writer singer and dancer. Discovered at a high school theater camp by a Hollywood manager, she got her start in the industry at 14. She has a striking presence with an undeniable talent through her range of portrayals of characters in television, film and the theater. Though she was raised by a widowed, single mother who worked as a registered nurse on the Navajo Reservation in Arizona, she is of Igbo-Nigerian, German, Irish and Scandinavian descent. She is also the granddaughter of a Igbo tribal leader which technically makes her African royalty. Inspired by her many cultural influences, Megalyn believes in the power of art and storytelling to expose injustice, shift culture and heal communities. CreditsThis podcast is a production of Rebel Girls and is based on the book series Good Night Stories for Rebel Girls. This episode was produced by Camille Stennis. Sound design and mixing by Camille Stennis, Lu Miranda and Craig Billmeir. This episode was written by Jestine Ware and fact checked by Joe Rhatigan. Executive Producer is Katie Sprenger. Haley Dapkus is our Production Manager. Original theme music was composed and performed by Elettra Bargiacchi. A big thanks to the whole Rebel Girls team who make this show possible! For more, visit rebelgirls.com. And if you like what you heard, don’t forget to rate and review this episode, and share it with your friends! Until next time, stay REBEL!
Up Next
Popular Playlists
Best Yoga Podcasts: Listen & Learn New Poses Sour Shoe's Greatest Moments on The Howard Stern Show Listen to: Top 15 Funniest Barack Obama Quotes 9 Game Design Podcasts Every Game Designer Needs to Hear 7 Podcast Episodes About The Golden State Killer That Will Keep You Up at Night David Parker Ray & Shocking Audio of the Toy Box Killer You Need to Hear Best UFO Podcasts That Will Abduct Your Mind Controversial Joe Rogan Experience Episodes Audio Wack Packer Beetlejuice Best Moments on The Howard Stern Show Best NoSleep Podcast Episodes To Terrify You Sexy ASMR Audio to Turn You On
Popular Categories
ASMR Business & Tech Cannabis Fashion & Beauty Gaming History Home & Garden Kids & Family Spirituality Travel
Add to playlist
New playlist