Your changes have been saved
All Audio The Comic Source Podcast 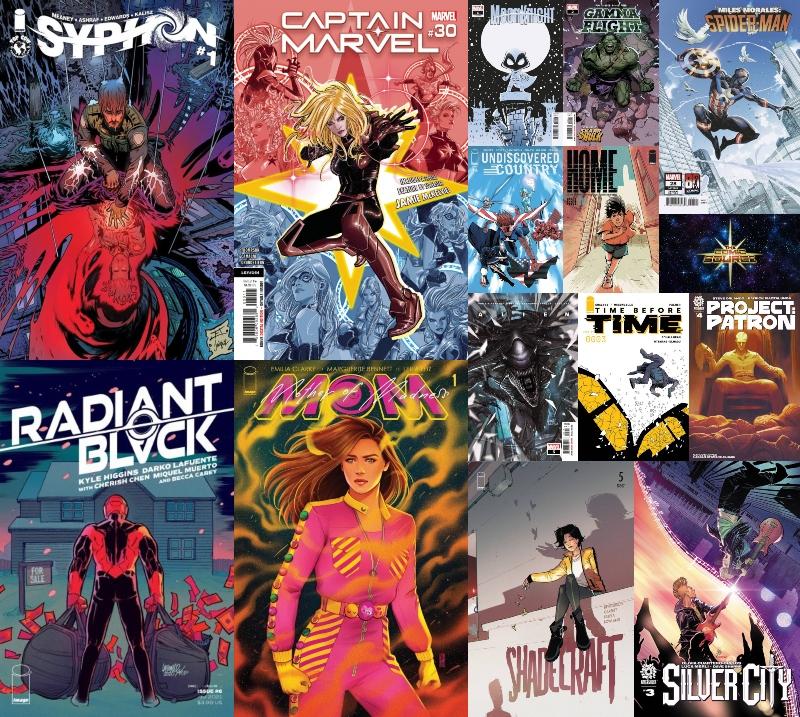 Time Before Time #3 - In this issue the time-travel aspect of the story starts to take a bit of a backseat to the crime noir feel of the story with the politics of the rivalry between the Union and the Syndicate showing up big time. Tons of action & characterization makes this feel like a big chunk
Category: Hobbies
Publish Date: Jul 21, 2021
Tagged in this Audio:
More
Jump to Full Description
Snippets are a new way to share audio!
You can clip a small part of any file to share, add to playlist, and transcribe automatically. Just click the to create your snippet!
Snippets: Clips of New Comic Wednesday July 21, 2021 that people like

There are currently no playlists containing this audio.
Add this audio track to one of your playlists
Add to Playlist
Up Next
Full Description
Back to Top
Time Before Time #3 - In this issue the time-travel aspect of the story starts to take a bit of a backseat to the crime noir feel of the story with the politics of the rivalry between the Union and the Syndicate showing up big time. Tons of action & characterization makes this feel like a big chunk of story that helps to flesh out the events from previous issues. Also the art from Joe Palmer is pitch perfect in combining all the elements of sc-fi, crime noir & action. Writers - Declan Shalvey & Rory McConville, Artist - Joe Palmer, Color Artist - Chris O'Halloran, Letterer - Hassan Otsmane-Elhaou   Undiscovered Country #14 - As we get to the second book of the third arc of this vast story from two veteran writers, it occurs to us that the end game for this series has yet to be defined. Will it be the expedition successfully finding a cure for the global plague? Will it be the re-opening of the United States to the rest of the world? Is it more meta than that and just enough that Snyder & Soule are starting a conversation about what it means to be American and even more than that, what it means to be a human being on earth. So much to think about always with this thought-provoking series. This issue itself is an exploration of American culture & one of it's most identifiable creations, the comic book super-hero. All this is illustrated & colored beautifully which the linework and colors jumping off the page. Writers - Scott Snyder & Charles Soule, Artist - Giuseppe Camuncoli & Leonardo Marcello Grassi, Color Artist - Matt Wilson, Letterer - Crank!   Alien #5 - Phillip Kennedy Johnson continues at what he does best, world-building. Taking the foundation of what we know about this world form the films, he gives us some great ideas in this issue that really provide tons of potential for more story. Also it gives such great context to the characters that Johnson has introduced us to in the series so far. You add in the action packed Salvador Larocca art that feels kinetic from cover to cover and you have an immensely enjoyable and compelling read. Writer - Phillip Kennedy Johnson, Artist - Salvador Larocca, Color Artist - Guru-eFx, Letterer -  Clayton Cowles   Gamma Flight #2 - Building on the appearances of Gamma Flight from the pages of The Immortal Hulk this series continues to enrich the world Al Ewing has built with the Immortal Hulk. There likely wasn't room in the main series with only two issues left to give these characters their due and we love that they are getting their own series to finishing telling their story. Skaar showing up at the end of last issue leads to epic action in this second issue just as you would expect. What you might not expect is how relatable and fun Ewing & co-writer Crystal Frasier make the husband and wife of Titania and Absorbing Man. Also while this feels like a team book and that team only feels like they are getting closer and understanding each other better, the action is fun but it is the character dynamics that make this books good. When you add in the fantastic line work of Lan Medina and the bright Antonio Fabela colors it raising the series up to great. Writers - Al Ewing & Crystal Frasier, Artist - Lan Medina, Color Artist - Antonio Fabela, Letterer - Joe Sabino   Captain Marvel #30 - Carol Danvers has reached the end of her magic journey and it doesn't end quite the way you expect. In fact, Carol may be worse off and have more enemies than ever including the magic wielders of the Marvel Universe. It's an intriguing and foreboding conclusion to the story from writer Kelly Thompson and expertly illustrated and colored by Jacopo Camagni and Espen Grundetjern. The fallout form the main story leads directly into a bonus back-up story from writer/artist Jamie McKelvie with some wonderful moments between Captain Marvel and Ms. Marvel. One of Marvel best books month in and month out, it's no surprise that Kelly Thompson has kept the Captain Marvel title going longer than any previous run of the series. Writers - Kelly Thompson & Jamie McKelvie, Artists - Jacopo Camgni & Jamie McKelvie, Color Artists - Espen Grundetjern & Jamie McKelvie, Letterer - Clayton Cowles   Home #4 - The latest issue of this series that started out feeling like a slice of life drama about family & immigration continues it's transformation into an action-packed story about a family with super powers. Also the series is an excellent representation of just how important family is in Latin cultures. When you add in the relevant politics you have the makings of a wonderful titles. Also the art is light-hearted and fun which helps the book from feeling heavy handed and balances out the series of the real-life issues being explored. Writer - Julio Anta, Artist - Anna Wiesczcyk, Color Artist - Bryan Valenza, Letterer - Hassan Otsma
Up Next
Popular Playlists
Best Yoga Podcasts: Listen & Learn New Poses Sour Shoe's Greatest Moments on The Howard Stern Show Listen to: Top 15 Funniest Barack Obama Quotes 9 Game Design Podcasts Every Game Designer Needs to Hear 7 Podcast Episodes About The Golden State Killer That Will Keep You Up at Night David Parker Ray & Shocking Audio of the Toy Box Killer You Need to Hear Best UFO Podcasts That Will Abduct Your Mind Controversial Joe Rogan Experience Episodes Audio Wack Packer Beetlejuice Best Moments on The Howard Stern Show Best NoSleep Podcast Episodes To Terrify You Sexy ASMR Audio to Turn You On
Popular Categories
ASMR Business & Tech Cannabis Fashion & Beauty Gaming History Home & Garden Kids & Family Spirituality Travel
Add to playlist
New playlist