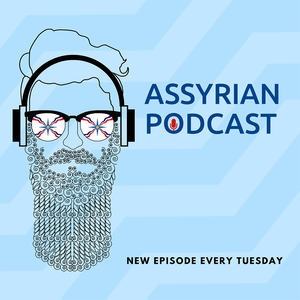 Episode 149 - Ninus Benjamin is a first generation Assyrian American. He has a twin sister, Shamiran, and older brother, Danny Benjamin. The twins were born in Santa Clara, California. Being raised in an Assyrian home to hard-working immigrants who had to learn things from scratch set a wonderful ex
Category: Documentary
Publish Date: Aug 31, 2021
Tagged in this Audio:
More
Jump to Full Description
Snippets are a new way to share audio!
You can clip a small part of any file to share, add to playlist, and transcribe automatically. Just click the to create your snippet!
Snippets: Clips of Ninus Benjamin that people like

There are currently no snippets from Ninus Benjamin.
Snippets are an easy way to highlight your favorite soundbite from any piece of audio and share with friends, or make a trailer for Assyrian Podcast
Create a Snippet
Playlists that Ninus Benjamin appears on.

There are currently no playlists containing this audio.
Add this audio track to one of your playlists
Add to Playlist
Up Next
Full Description
Back to Top
Episode 149 - Ninus Benjamin is a first generation Assyrian American. He has a twin sister, Shamiran, and older brother, Danny Benjamin. The twins were born in Santa Clara, California. Being raised in an Assyrian home to hard-working immigrants who had to learn things from scratch set a wonderful example for them. Being bilingual has been an added advantage not only in academics, but also when it comes to learning new skills, talents, and technologies.

He found his entrance into Google in 2013 where he spent a few years learning the ropes and eventually moving towards his passion, "helping people." Recruiting came easy as he began Recruiting for engineering leadership roles at two of the largest tech companies in the world. He would eventually find his home at Facebook for almost 4 years where he has brought in an enumerable number of people into the "company of their dreams." Learning the technical requirements, understanding how to find them using exhaustive searches, closing candidates....

Support for this week’s episode of The Assyrian Podcast is brought to you by Tony Kalogerakos and the Injury Lawyers of Illinois and New York. If you know anyone that has been in a serious accident, please reach out to Tony Kalogerakos. Tony has been recognized as a Top 40 lawyer, and a Rising Star by Super Lawyers Publication and has obtained multiple multi-million-dollar awards. Tony can be reached at InjuryRights.com or 847-982-9516.

This episode is sponsored by The Oushana Partners-- a husband and wife real estate team. Are you considering purchasing or selling a home in Arizona or California? John and Reata are available to help make your next real estate decision into a seamless transaction. Contact the Oushana’s at 209-968-9519. Get to know them a bit more by checking out their website TheOushanaPartners.com.
Up Next
Popular Playlists
Best Yoga Podcasts: Listen & Learn New Poses Sour Shoe's Greatest Moments on The Howard Stern Show Listen to: Top 15 Funniest Barack Obama Quotes 9 Game Design Podcasts Every Game Designer Needs to Hear 7 Podcast Episodes About The Golden State Killer That Will Keep You Up at Night David Parker Ray & Shocking Audio of the Toy Box Killer You Need to Hear Best UFO Podcasts That Will Abduct Your Mind Controversial Joe Rogan Experience Episodes Audio Wack Packer Beetlejuice Best Moments on The Howard Stern Show 12 Best Episodes of the NoSleep Podcast to Keep You Up at Night Sexy ASMR Audio to Turn You On
Popular Categories
ASMR Business & Tech Cannabis Fashion & Beauty Gaming History Home & Garden Kids & Family Spirituality Travel
Add to playlist
New playlist