Your changes have been saved
All Audio American English Grammar Review! 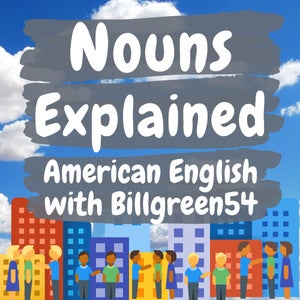 Nouns! People, place, thing and what about Ideas?

From Audio: Nouns! All About People, Place, Thing, Idea by Billgreen54

What Are Nouns? People, place, thing, idea! Simple right?
50:50 5/6/21 14 audios
Up Next
Full Description
Back to Top
Billgreen54 explains American English in easy to understand lessons!
Transcripts
Back to Top
54 A noun is the name of a person, place thing or idea. A proper noun is a word that always starts with a capital letter or to name a specific one of a kind item. Common grounds are words used to name general items. A word is just a word until you decide how to use it. Most knowledge is can also be used as a verb. Here are some common now. Can you find them? Here's a question. Hey, is that your car? Yes. I just bought it a few days ago. The word car is a noun and the word DS is a noun. Why are they running down the street? Well, maybe because they need to catch the bus. Street is a noun and bus is a noun. Do you want to buy a pair of jeans? Yes. Let's go to the shop, jeans is a noun and shop.
Up Next
Popular Playlists
Best Yoga Podcasts: Listen & Learn New Poses Sour Shoe's Greatest Moments on The Howard Stern Show Listen to: Top 15 Funniest Barack Obama Quotes 9 Game Design Podcasts Every Game Designer Needs to Hear 7 Podcast Episodes About The Golden State Killer That Will Keep You Up at Night David Parker Ray & Shocking Audio of the Toy Box Killer You Need to Hear Podcasts About UFO & Aliens That Will Abduct Your Mind Audio Cheat Sheet To The Sexy Liberal Podcast Network Controversial Joe Rogan Experience Episodes Audio Wack Packer Beetlejuice Best Moments on The Howard Stern Show 12 Best Episodes of the NoSleep Podcast to Keep You Up at Night
Popular Categories
ASMR Business & Tech Cannabis Fashion & Beauty Gaming History Home & Garden Kids & Family Spirituality Travel
Add to playlist
New playlist