All Audio Beating Goliath
Episode 3 of 3 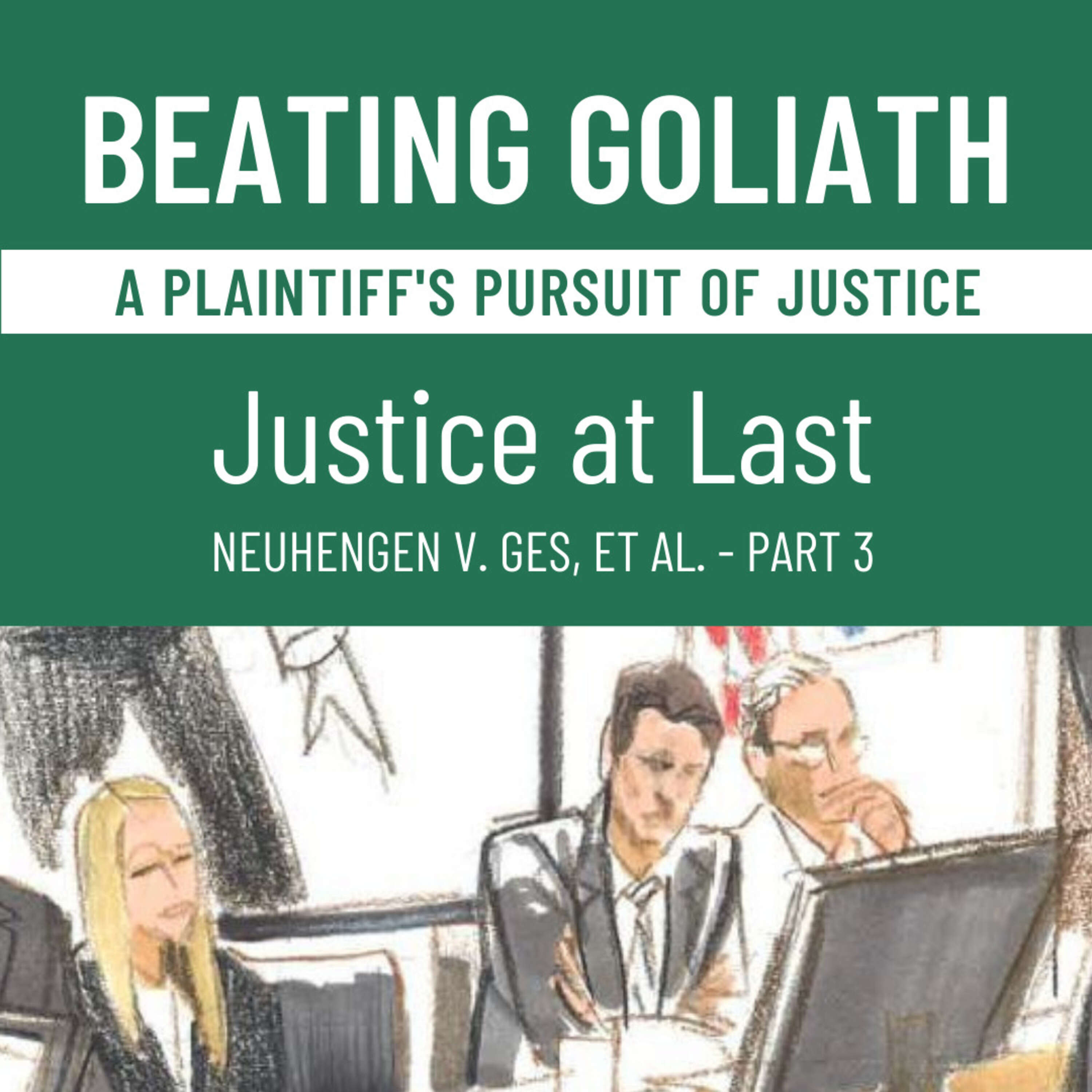 Two days after closing arguments, the verdict finally comes in. After a long trial, the jury finds Tom was not at fault for his injury and awards him just over $12.2 million in compensation. They also find GES acted with a reckless disregard for safety.Given the verdict, and that GES had been cited
Category: Documentary
Publish Date: Aug 17, 2021
Tagged in this Audio:
More
Jump to Full Description
Snippets are a new way to share audio!
You can clip a small part of any file to share, add to playlist, and transcribe automatically. Just click the to create your snippet!
Snippets: Clips of Part 3: Justice at Last that people like

There are currently no playlists containing this audio.
Add this audio track to one of your playlists
Add to Playlist
Up Next
Full Description
Back to Top
Two days after closing arguments, the verdict finally comes in. After a long trial, the jury finds Tom was not at fault for his injury and awards him just over $12.2 million in compensation. They also find GES acted with a reckless disregard for safety.Given the verdict, and that GES had been cited by the Occupational Safety and Health Administration (OSHA) three times in the previous eight years for using uncertified forklift drivers, the jury also imposed $3 million in punitive damages on the company. Tom and his lawyers at Salvi, Schostok & Pritchard are happy that the jury has acknowledged the impact the accident has had on his life and hope the punitive damages will dissuade GES and other companies from acting in a similarly dangerous way in the future.However, the case isn’t over just yet. In response to a motion filed by the defense, the judge issues a judgement notwithstanding the verdict (JNOV), overturning the punitive damages. With the help of appellate lawyer Bob Black, Tom’s legal team appeals the JNOV.In the final episode of this three-part series, Tom and his attorneys find out if justice will finally be served on all counts.Characters in this Episode⚖️ Tom Neuhengen, Plaintiff
Military veteran. Sustained a life-altering injury while working at a trade show in Chicago.
“It might sound corny, but I’m trying not to change who I am. I still have the same job, I'm still in the National Guard. You plan for the worst and hope for the best, and focus on life.”
⚖️ Patrick Salvi Jr., Partner at Salvi, Schostok & Pritchard
Lawyer representing Tom’s case against the company.
“We knew we had to appeal that post-judgement ruling, because it represented the punishment for GES’s behavior and the deterrence for them and others.”
⚖️ Aaron D. Boeder, Partner at Salvi, Schostok & Pritchard
Lawyer representing Tom’s case.
“We always tell our clients that we can't wave a magic wand and fix you, but at least financial strain will not be a consideration.”
⚖️ Patrick A. Salvi, Sr. Managing Equity Partner at Salvi, Schostok & Pritchard
Lawyer representing Tom’s case.
“The defense didn't want to compromise: they felt like they were going to win in the appellate process. Tom followed our advice and he was very patient: he trusted us.”
⚖️ Bob Black: Owner and Sole Practitioner of the Law Offices of Robert G. Black
Appellate lawyer representing Tom’s appeal against the JNOV.
“These guys have tremendous skills as trial lawyers: but the skill set for appeals is different. It's heavily based on writing, and it's time-consuming to read these records.”

Plot PointsZero-sum game: The lawyers at Salvi, Schostok & Pritchard hope that the jury will find Tom 0% negligent: any other outcome means losing the case or a decrease in compensation.The verdict is win: The jury finds that Tom was 0% at fault and awards him $12,228,068. They also find GES acted with reckless indifference and should pay an additional $3 million in punitive damages, which goes to Tom.The joy in justice: Tom and his attorneys are relieved that justice has been served, and hope that the punitive damages will force GES and others to adopt better safety procedures.The twist: Six months later, a judge approves a motion by defense counsel to dismiss the punitive damages, reasoning that the driver’s lack of certification didn’t contribute to the accident.Unacceptable: Tom’s lawyers decide to appeal this JNOV (judgement notwithstanding the verdict) because punitive damages are the most effective way to send a strong message and prevent further accidents.Legal appeal: Appellate lawyer Bob Black joins the legal team. In appellate court, each side presents the existing evidence and testimonies before three justices. The verdict is in again: The justices rule that there isn’t enough evidence to conclude that GES’s failures didn’t contribute to Tom’s accident. They overturn the JNOV and reinstate the punitive damages.Unappealing: GES tries to appeal the appe
Up Next
Add to playlist
New playlist