Your changes have been saved
All Audio Creepy Chats

Start Time: 13:07 End Time: 14:52
Jeff puts on a white hoodie and dress pants and goes to the party, where he finds some comfort playing with a toy gun.
Category: Society & Culture Arts
Publish Date: Jul 05, 2021
Snipped By:
Share 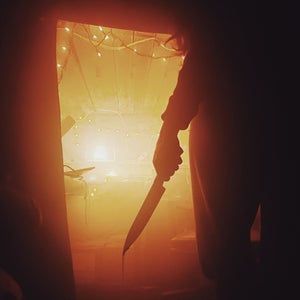 Go Deeper With Creepypasta: Jeff the Killer
01:27:43 7/4/21 10 audios
Up Next
Full Description
Back to Top
Sent upstairs to change, Jeff puts on a white hoodie and dress pants and goes to the party. He is fully prepared to have a bad time but ends up having more fun than he'd like to admit while playing with a toy gun — which reminds him of Liu. Unfortunately, the fun doesn't last long. Randy and his friends show up and all hell breaks loose.
Transcripts
Back to Top
son, Is that all you're going to wear? Said Jeff's mom. Better than wearing too much, he said. His mother pushed down the feeling to yell at him and hit it with a smile. Now Jeff we may be overdressed, but this is how you go. If you want to make a good impression, said his mother. Jeff grunted and went back up to his room. I don't have any fancy clothes. He yelled downstairs, just pick something called his mother. He looked around the closet for what he would call fancy. He found a pair of black dress pants he had for special occasions in an undershirt. He couldn't find a shirt to go with it though. He looked around and found only striped and patterned shirts, none of which would go with dress pants. Finally, he just found a white hoodie and put it on. You're wearing that they both said his mother looked at her watch. Ah there's no time to change, let's just go, she said, as she heard it, Jeff and her father out the door. They crossed the street over to Barbara and Billy's house. They knocked on the door and and it appeared that and add it appeared that Barbara just like his parents were way over dressed as they walked inside. All Jeff County, we're adults and no kids, kids are in the yard, Jeff how about you go and meet some of them said Barbara, Jeff walked outside to a yard full of kids. They were running around and weird cowboy costumes and shooting each other with plastic guns. He might as well be standing in a toys r us. Suddenly a kid came up to him and handed him a toy gun and a hat, Hey want to play? He said uh no kid, I'm way too old for that stuff. Kid looked at him with this weird puppy dog face, please, said the kid fine. So Jeff, he put on the hat and started to pretend to shoot at the kids. At first you thought it was totally ridiculous. Then he started to actually have fun.
Up Next
Popular Playlists
Best Yoga Podcasts: Listen & Learn New Poses Sour Shoe's Greatest Moments on The Howard Stern Show Listen to: Top 15 Funniest Barack Obama Quotes 9 Game Design Podcasts Every Game Designer Needs to Hear 7 Podcast Episodes About The Golden State Killer That Will Keep You Up at Night David Parker Ray & Shocking Audio of the Toy Box Killer You Need to Hear Best UFO Podcasts That Will Abduct Your Mind Controversial Joe Rogan Experience Episodes Audio Wack Packer Beetlejuice Best Moments on The Howard Stern Show Best NoSleep Podcast Episodes To Terrify You Sexy ASMR Audio to Turn You On
Popular Categories
ASMR Business & Tech Cannabis Fashion & Beauty Gaming History Home & Garden Kids & Family Spirituality Travel
Add to playlist
New playlist