You and Me Both with Hillary Clinton
Duration: 02:28
Play Audio
Add to Playlist
Share Report 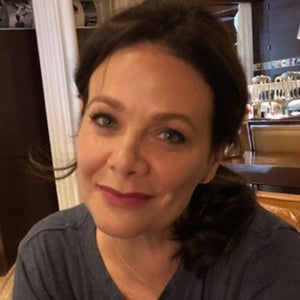 There are currently no playlists containing this audio.
Add this audio track to one of your playlists
Add to Playlist
Up Next
Full Description
Back to Top
Patton Oswalt talks with Hillary Clinton about grief and finding love again with actress Meredith Salenger
Transcripts
Back to Top
and that went on for three months, just writing. And then we over that time we fell in love, just writing to each other, and then we But it was so like Victoria. Like like like one of those epistolary romances. Just the letters back and forth. And then finally, on May 20th, we were like, Okay, we should meet. I go, Where should we go? And and justice, it really goes. Let's pick like a restaurant with, like, a beach or something nearby. So in case this doesn't go well, we can like one of us can go for a walk or we can We'll give each other a bolt hole. We were so worried that it wasn't gonna work. And then, um, we we met at the restaurant at Shutters and we just locked eyes and it was like, Oh, my God, I just you know, And then that. And then july 4th, I proposed in November 4th we were married. It was, you know, I'm a sucker for a happy, but I mean, as far as telling the people out there, you know, you have to be very Let yourself get over your grief first, but don't write off the possibility of love if you're not completely done with your grief like I wasn't completely done. And MEREDITH was was more open than I was about, because I know you still have stuff to go through. And if you want to wait or postpone, I'm not trying to rush you into anything. But it was That attitude of hers made me go. Oh, no, I should be with her. This is amazing. That's so great. And also you think to a certain age like Look, if we've been in her twenties, Absolutely. We should move in together and I don't know I'm still. But once you're in your late forties, you're like, I know who I am. I know when I've met someone who's not insane, this person's awesome. Why would I let this person you know? So that's that's kind of where we were. So that's a pretty low bar. I've met someone who's not insane. Well, living in living in Los Angeles, that's actually arrested. Finding a unicorn. She's not insane. I guess I got to marry her. It's amazing she's sane. Finer. Uh oh, my gosh! Oh, Patent as well. I have so enjoyed talking to you. My This was what a tree. Thank you. Patton's newest comedy special, I Love Everything is out on Netflix, and the HBO documentary series I'll Be Gone in the Dark is based on the best selling book by Michelle McNamara. Sabrina Fulton is probably best known as Trayvon as Mom.
Up Next
Popular Playlists
Best Yoga Podcasts: Listen & Learn New Poses Sour Shoe's Greatest Moments on The Howard Stern Show Listen to: Top 15 Funniest Barack Obama Quotes 9 Game Design Podcasts Every Game Designer Needs to Hear 7 Podcast Episodes About The Golden State Killer That Will Keep You Up at Night David Parker Ray & Shocking Audio of the Toy Box Killer You Need to Hear Podcasts About UFO & Aliens That Will Abduct Your Mind Audio Cheat Sheet To The Sexy Liberal Podcast Network Controversial Joe Rogan Experience Episodes Audio Wack Packer Beetlejuice Best Moments on The Howard Stern Show 12 Best Episodes of the NoSleep Podcast to Keep You Up at Night
Popular Categories
ASMR Business & Tech Cannabis Fashion & Beauty Gaming History Home & Garden Kids & Family Spirituality Travel
Add to playlist
New playlist