Personality Radio And The Station To The Stars – KMPC – 1968 – Past Daily Pop Chronicles. Click on the snippet for a sample.

From Audio: Personality Radio And The Station To The Stars – KMPC – 1968 – Past Daily Pop Chronicles 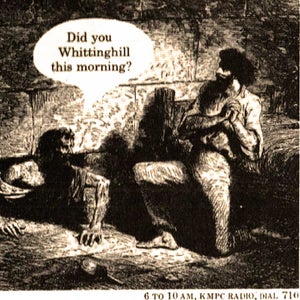 05:16
Play Audio
Add to Playlist
Share Report
While Top 40 was dominating the AM Radio airwaves in the 1960s, the distant second was Middle-Of-The-Road; radio that didn’t make too many waves and was long on personalities, but with music blending comfortably into the woodwork. It was music to be listened at, not to. The Personality was the all-i
Category: Radio
Publish Date: May 08, 2021
Snipped By:
Share
station description Past Daily: News, History, Music And An Enormous Sound Archive.

Past Daily: Amazing Historical Concerts & News
Tagged in this Audio:
More
Jump to Full Description Transcript
Found on these Playlists
Full Description
Back to Top
While Top 40 was dominating the AM Radio airwaves in the 1960s, the distant second was Middle-Of-The-Road; radio that didn’t make too many waves and was long on personalities, but with music blending comfortably into the woodwork. It was music to be listened at, not to. The Personality was the all-important ingredient.

KMPC (AM 710 in Los Angeles) was probably one of the best known of the Middle-Of-The-Road radio stations. It was the quintessential Bachelor Pad music – Catering to the 3-Martini lunch crowd, the Mad Men genre, the slightly-too-old-to-wear-bell-bottoms-but-too-young-not-to-try demographic, KMPC juggled frothy banter with a mixture of Sunshine Pop and sanitized versions of hits. But rather than toss nameless music at its audience, the KMPC Personalities took pains to let people know who was singing and playing what, along the same lines a Jazz DJ would take great pains mentioning musicians and album numbers. It was a way to add legitimacy to the music they were playing. In many cases, quite a number of respected Jazz figures wound up being featured on KMPC playlists. Artists such as Wes Montgomery and Jimmy Smith would routinely be heard on a KMPC broadcast – so to say KMPC was playing strictly “elevator music” would be short-changing an attempt at broadening musical tastes here and there. Nothing radical to be sure, but a concerted effort to be Hip-light.

One of the mainstays of the morning shift was Dick Whittinghill. Starting with the station in the 1950s and going all the way into the late 1970s, Whittinghill was one of the Personalities that helped make KMPC the popular station it was at the time.

As you may have noticed by now, popular culture was a melting pot of all sorts of elements. Some pioneering and cutting-edge, but most were benign.
Transcripts
Back to Top
And your last. Good morning. This is Winning Hill. A certain girl, certain girl along some wonderful day. She should smile. Smile The right kind of singers with a certain girl to start things going on this jolly old Sunday. It says Sunday May the 12th 1968. And again we acquiesce to management's demands that we fill in for a fast our between the churches and Ira cook for a while. It looked like we get out of this. But they ran out of churches and they had, they came up empty. They had an hour left over says quit here, the oldest and most decrepit. One of the bunch. You go down there and fill in. Have a nice little leading for Ira cooking. We're delighted to do so larry and I are here today again, as usual, the right kind of singers. This is Al CAPP. Why get rid of those 33,000 junk yards along our highways? Why not, why not sign them with the names of far out artists and declare him culture centers? No one could tell the difference and there are a lot less ugly. But if it's real ugly, you want ever see a once beautiful car wrapped around another one's beautiful car intertwined with the once beautiful bush State Farm Mutual, the world's largest car insurers in the business of providing the money to get your smashed up car restored to its original beauty. And they found a way to give that service for lower rates than most companies. But until someone finds a way to restore a crushed bush, we'd better drive cautiously or we'll all be forced to look at what's behind those bushes. It could be a culture center for your car and your home and your life State Farm is all you need to know about insurance. Mhm. Uh huh. Wouldn't you really rather have a Buick? A Buick Brown Buick. Wouldn't you really rather have a Buick this year? A Buick Lesabre is waiting for you right now. Buick bargain days are here and that new Buick Lesabre equipped the way you'd like is easier to own than ever before. Buick bargain days is happening for you right now. Mhm. If time were not a movement and I couldn't make it stay this hour of love we share would always be there'd be no coming day to shine a morning light and make us realize tonight is over. When you walk away from me, there is no place to put my hand except to shade my eyes against the sun that rises all the land. I watch you walk away. Somehow I have to let you go now it's over. If you knew just how I really feel, you might return.
Up Next
Add to playlist
New playlist