Your changes have been saved
All Audio ‎The Critical Hour 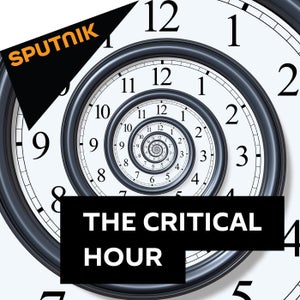 Laith Marouf, broadcaster and journalist based in Beirut, joins us to discuss the Iraqi elections. It appears that the influential Shi'ite cleric and nationalist Moqtada al-Sadr's party, Sairoun, is currently performing the best.Jim Kavanagh, writer at thepolemicist.net & CounterPunch and the author
Category: Society & Culture
Publish Date: Oct 12, 2021
Tagged in this Audio:
More
Jump to Full Description
Snippets are a new way to share audio!
You can clip a small part of any file to share, add to playlist, and transcribe automatically. Just click the to create your snippet!
Snippets: Clips of Putin, Merkel, Macron Talk Normandy Format for Resolution of Issues; Imperialist Return to Africa that people like

There are currently no playlists containing this audio.
Add this audio track to one of your playlists
Add to Playlist
Up Next
Full Description
Back to Top
Laith Marouf, broadcaster and journalist based in Beirut, joins us to discuss the Iraqi elections. It appears that the influential Shi'ite cleric and nationalist Moqtada al-Sadr's party, Sairoun, is currently performing the best.Jim Kavanagh, writer at thepolemicist.net & CounterPunch and the author of "Danger to Society: Against Vaccine Passports," joins us to discuss Julian Assange. Kevin Gosztola argues that the recent information regarding Mike Pompeo's moves to kidnap and assassinate Julian Assange proves that the legal persecution of the publisher is driven by an unethical and illegal thirst for revenge. Also, we discuss the upcoming hearing at the end of October regarding a previous lower court decision. Dan Lazare, investigative journalist and author of "America's Undeclared War," joins us to discuss the Normandy Four. The leaders of Russia, Germany, and France are discussing the need to coordinate their efforts to deal with a myriad of international security issues in a format known as the "Normandy Four."Gerald Horne, professor of history at the University of Houston, author, historian, and researcher, joins us to discuss Africa. Dr. Horne analyzes the resurgence of coups and imperialist intervention in Africa. Recent events may show that the US empire and the French imperialists are on the move again in the resource-rich continent.K. J. Noh, peace activist, writer, and teacher, joins us to discuss China. Former Australian Prime Minister Tony Abbott published a speech that he gave in Taiwan. The speech can be interpreted in several ways, but many see it as a message that the Chinese island should not look to the West for protection if a war starts. International security observers argue that the West is setting Taiwan up for a fall as they push them towards a crushing military defeat. Obi Egbuna, activist, and US Rep for The Zimbabwean Newspapers, joins us to discuss Libya. The US/NATO imperial regime-change operation has led to disastrous conditions in the African nation. Additionally, it has opened the gateway to African migration to Western Europe. Marjorie Cohn, professor of law at the Thomas Jefferson School of Law in San Diego, joins us to discuss torture. The Biden administration is moving forward with an absurd argument that their highly publicized torture program is a state secret. This move comes to stop the court from compelling psychologists involved in the torture to testify. Mark Sleboda, Moscow-based international relations security analyst, joins us to discuss EU gas issues and the AUKUS submarine deal. There is talk of fast-tracking the Nord Stream 2 pipeline process as the EU faces a disastrous shortage of fuel.
Up Next
Popular Playlists
Best Yoga Podcasts: Listen & Learn New Poses Sour Shoe's Greatest Moments on The Howard Stern Show Listen to: Top 15 Funniest Barack Obama Quotes 9 Game Design Podcasts Every Game Designer Needs to Hear 7 Podcast Episodes About The Golden State Killer That Will Keep You Up at Night David Parker Ray & Shocking Audio of the Toy Box Killer You Need to Hear Best UFO Podcasts That Will Abduct Your Mind Controversial Joe Rogan Experience Episodes Audio Wack Packer Beetlejuice Best Moments on The Howard Stern Show Best NoSleep Podcast Episodes To Terrify You Sexy ASMR Audio to Turn You On
Popular Categories
ASMR Business & Tech Cannabis Fashion & Beauty Gaming History Home & Garden Kids & Family Spirituality Travel
Add to playlist
New playlist