Your changes have been saved
All Audio Get Naked with Alix

Rape (and Incest) in Mythology

Start Time: 18:15 End Time: 20:08
While both rape and incest are extremely taboo and heavily frowned upon, both come up frequently in Greek mythology. Incest was legal so long as you had different mothers, and rape was only discussed in terms of male raping other men.
Category: Sex & Sexuality
Publish Date: Aug 31, 2021
Snipped By:
Share 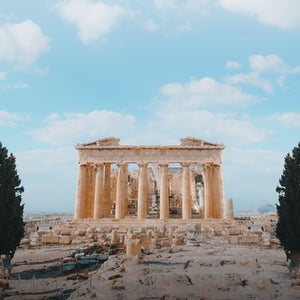 Podcasts About Greek Mythology
01:45:51 8/31/21 18 audios
Up Next
Full Description
Back to Top
While both rape and incest are extremely taboo and heavily frowned upon, both come up frequently in Greek mythology. In terms of Greek society, incest was legal so long as you had different mothers, and rape was only discussed in terms of male raping other men. Many times, rape was commonly interchanged with seduction, and consent for sex was true consent, heavily convinced consent, or physically forced.
Transcripts
Back to Top
her advances. She cries herself to death turning into a spring of water. All this incest got me thinking what were the Greeks views on incest at the time. Obviously it seems pretty God focused mostly, but you weren't really allowed to look down on what the gods were doing. So turns out incest was actually legal only as long as you were born from different women, it seems like parent child relationships were rare and potentially look down on, but you were good as long as you have different moms. Another constant theme, arguably the most constant theme is rape. The word rape when used in greek mythology confused the fuck out of me for a while. I did however, kind of figure it out. I think. So if you keep in mind the life and times of the ancient Greeks, women didn't really have a say in politics. Laws and rights. Men kind of owned everything. And with that the words raped and seduced, get interchanged a lot. And the relating story could really hold either meaning. And some stories have totally alternative tellings where the sexual intercourse was clearly consensual. For instance, you can find versions of the story of lita and the swan or Zeus disguised as a swan in which it says she was raped because who willingly has sex with the swan. There's one where she's seduced by the charming swan while they're stuck in a cave and also that she just flat out does it because why not? I think mostly seduction and rape were used to describe the choice of sex being taken from a woman in any way. Either she was heavily convinced and had no chance fighting the manipulations or she was physically forced. Both were considered rape and seduction, if that makes sense? Neither were her choice. I looked up rape laws in Greece and they only really covered males. Men would be severely punished if they raped other men, but women not so much. Again, women didn't really have the rights and weren't allowed much free will anyway. So there's a lot of rape in these stories. I won't get too heavily into that. It's all the same. Mostly someone forces or coerces someone into something.
Up Next
Popular Playlists
Best Yoga Podcasts: Listen & Learn New Poses Sour Shoe's Greatest Moments on The Howard Stern Show Listen to: Top 15 Funniest Barack Obama Quotes 9 Game Design Podcasts Every Game Designer Needs to Hear 7 Podcast Episodes About The Golden State Killer That Will Keep You Up at Night David Parker Ray & Shocking Audio of the Toy Box Killer You Need to Hear Best UFO Podcasts That Will Abduct Your Mind Controversial Joe Rogan Experience Episodes Audio Wack Packer Beetlejuice Best Moments on The Howard Stern Show Best NoSleep Podcast Episodes To Terrify You Sexy ASMR Audio to Turn You On
Popular Categories
ASMR Business & Tech Cannabis Fashion & Beauty Gaming History Home & Garden Kids & Family Spirituality Travel
Add to playlist
New playlist