All Audio The Rich Eisen Podcast 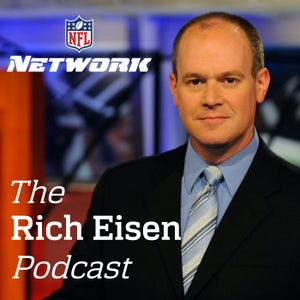 Its a special lineup for the Wild Card Weekend edition of the Podcast -- a legend of the booth, a trusted American voice and the most prolific tight end in the history of the National Football League, all in one show
First up, Falcons tight end Tony Gonzalez joins us just mere days before taking on
Category: Sports & Adventure
Publish Date: Jan 05, 2012
Tagged in this Audio:
More
Jump to Full Description
Snippets are a new way to share audio!
You can clip a small part of any file to share, add to playlist, and transcribe automatically. Just click the to create your snippet!
Snippets: Clips of REP: Tony Gonzalez, Brian Williams, Michael Lombardi and Jim Brockmire that people like

Best Michael Lombardi Interviews on Podcasts or Audio about Michael
31:32:49 9/21/21 31 audios
Up Next
Full Description
Back to Top
Its a special lineup for the Wild Card Weekend edition of the Podcast -- a legend of the booth, a trusted American voice and the most prolific tight end in the history of the National Football League, all in one show
First up, Falcons tight end Tony Gonzalez joins us just mere days before taking on the Giants for the right to move on to either Green Bay or San Francisco. Would you believe that , with all the records and stats requisite for a first-ballot selection to the Pro Football Hall of Fame, Gonzalez does not have a single playoff win under his belt? He enters Sunday's game 0-for-4 in career playoff appearances and, of course, we talk about whether that's on his mind when he suits up this weekend. We also hit on whether or not the Falcons' inconsistencies on offense are behind them, the skills of rookie Julio Jones and the unreal talent that his success seems to have spawned at the position through the league
Next up, one of my favorite guests we've had on the podcast to date: NBC News' Brian Williams, the most trusted newsman of this generation who also just happens to be one of the driest wits and best raconteurs of all-time. Williams took a few minutes to join us from his set at 30 Rock during the middle of a very busy day -- Iowa Caucus Tuesday -- to discuss his beloved Giants. Williams is a New Jersey native who grew up loving the Giants while attempting a (sadly short) run at high school gridiron glory of his own. It is a tale of woe not to be missed. Williams chimes in on the controversy-ravaged Jets and why it's difficult for him to predict a winner on the Lions-Saints wild-card matchup on his network Saturday night. Then we sent him back to the world of Romney, Santorum et al.
Another Jersey boy -- Michael Lombardi -- joins the show to make heads/tails about the vacant coaching situations and why there aren't openings in Chicago, where the GM got fired, and San Diego, where the GM didn't. Why did the Colts finally part ways with the Polians and what's their next step on the Peyton Manning front? What in the world can the jets do with a disgruntled receiver, a regressing quarterback and coach who is suddenly under fire despite have gone to the AFC Championship Game in each of his first two years? You'll be especially keen to hear to whom Lombardi compares the current Jets. A hint: it's not very flattering.
Lastly, a fourth visit to the studio by the legend of the booth himself, Jim Brockmire. The Hall of Fame announcer whose famous on-air meltdown has been on the comeback trail thanks much in part to this podcast, on which he has delivered the plays of the month for September, October and November. Now, Jim is back with the plays for the month of December and also with a strange looking half-goatee.  There's lots to discuss with Jim, who also laments the firing of the Polians and gives his latest unique take on his favorite topic: Tim Tebow.
It's all in one mega Wild Card Weekend podcast to enjoy. Lots in the hopper for the divisional round podcast on tap for next week.  Stay tuned


Learn more about your ad-choices at https://www.iheartpodcastnetwork.com
Up Next
Add to playlist
New playlist