Your changes have been saved
All Audio Animals Today Radio 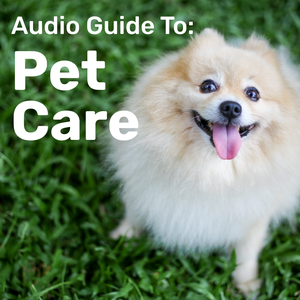 Animal Care: Top Pet Podcasts
42:01 4/9/21 11 audios
Up Next
Full Description
Back to Top
Cat behaviorist Rita Reimers tells "Animals Today" host Dr. Lori Kirshner about the myraid reasons cats might mark surfaces with urine. Reimers shares her tips on what to do if cats are peeing everywhere and provides insight on how to effectively extinguish the behavior.
Transcripts
Back to Top
Cat behaviourist Reader. Reimers. Rita has been working with cats for 30 years and considers her ability to understand cats and they're funny behaviors. Her calling in life. She helps people understand their cats and find solutions to behavioral issues that might otherwise cause a cat to be surrendered. Welcome to the program, Rita. Thank you for having me. Dr Lori. I really appreciate it. Rita. I read that the most common behavioral problem reported by pet parents of cats is inappropriate elimination and that it's estimated that 10 of cats will eliminate outside their litter box at some point in their lives. What are some reasons cats do not use the litter box? Yeah, that's a great question. And that is the number one reason kath are surrendered two shelters. Um Often it is undiagnosed medical issues as you probably know less than 50% of our pet cat companions make it to the veterinarian's office. And Qatar such masters at hiding their illness that often by the time you spot in an appropriate urination outside the box or something else. Um There's a pretty decent infection going on. But of course some of it can be behavioral as well. Um If you've got a few cats and maybe the litter isn't quite as clean. I have one cat that's really picky and she follows me around as I scoop the litter boxes and she's got to be the first one in. You know, she doesn't like to use it once anyone's done anything in it. Um Also if you've got some bullying going on, sometimes cats bully each other around the litter box just because they can, so the other one is scared to go in there and make themselves vulnerable. It's easier to pee outside of it and run off than to be stuck inside the litter and get antagonized. But the number one thing I would say is if your cut is suddenly peeing outside the box that veterinary visit to rule out urinary track infection or any other type issue is the number one thing to do Now urine marking is different than having cat box issue is what is urine marking? And how does it differ from a little box problem? But it's more common in males. Although some females do marking cats tend to do that out in nature to identify their territory and signal to other cats they are not welcome. This territory is claimed. Now an indoor cat make you it if there's too many cats in the household or um sometimes it's just something changes in the household, somebody gets married and there's a new person in the household I've dealt with that even uh their favorite human maybe is the child who went off to college and is now not there. So insecurity can cause marking and cats to spray up a territory that they want to keep all to themselves. And how do you treat urine marking and cats? One of the things I suggest is getting one of those feel away or similar type of uh, plug in that helps. It's a pheromone release that helps calm the cats. Um, if you've got multi capsules of multi cat version that actually simulates the hormones that mama cat releases, that helps all the kittens get along with each other. So that will help. I also love some herbal remedies. Jackson Galaxy has got some herbal remedies. Rescue remedy for pets is great. You just put it in the water and it just helps that relax. Then you, you might want to investigate the root cause for example, um, if you've moved to a smaller place and there's not as much room, add some vertical space, some tall cap trees and other places for cuts to go adding vertical spaces, giving them new territory. So a lot of time it just takes some time and and knowing what the causes. But again, number one thing I always tell people go to your veterinarian, make sure that there is not a medical reason for their sudden anxiety and uh, you know, all the best behavior advice in the world can't correct a medical issue. So that's always my number one. So what I say is always bearing in mind you've already done that. Exactly. And you don't rub your cat's nose into the urine, Right? No, no, no, no, no, never.
Up Next
Popular Playlists
Best Yoga Podcasts: Listen & Learn New Poses Sour Shoe's Greatest Moments on The Howard Stern Show Listen to: Top 15 Funniest Barack Obama Quotes 9 Game Design Podcasts Every Game Designer Needs to Hear 7 Podcast Episodes About The Golden State Killer That Will Keep You Up at Night David Parker Ray & Shocking Audio of the Toy Box Killer You Need to Hear Podcasts About UFO & Aliens That Will Abduct Your Mind Audio Cheat Sheet To The Sexy Liberal Podcast Network Controversial Joe Rogan Experience Episodes Audio Wack Packer Beetlejuice Best Moments on The Howard Stern Show 12 Best Episodes of the NoSleep Podcast to Keep You Up at Night
Popular Categories
ASMR Business & Tech Cannabis Fashion & Beauty Gaming History Home & Garden Kids & Family Spirituality Travel
Add to playlist
New playlist