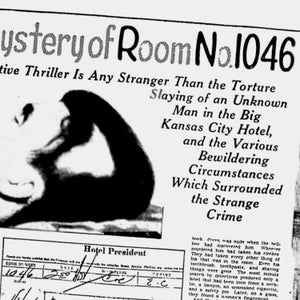 So excited for creepy season! And that means all new episodes of This Story is Nuts with a creepy twist the entire month! Also, keep an eye out for BONUS episodes! They will be sprinkled in for the entire month of October!
Today's Episode:
Roland T Owen would check into the President Hotel in Kanas
Category: True Crime
Publish Date: Oct 06, 2021
Tagged in this Audio:
More
Jump to Full Description
Snippets are a new way to share audio!
You can clip a small part of any file to share, add to playlist, and transcribe automatically. Just click the to create your snippet!
Snippets: Clips of Room 1046 that people like

There are currently no snippets from Room 1046.
Snippets are an easy way to highlight your favorite soundbite from any piece of audio and share with friends, or make a trailer for This Story is Nuts
Create a Snippet
Playlists that Room 1046 appears on.

There are currently no playlists containing this audio.
Add this audio track to one of your playlists
Add to Playlist
Up Next
Full Description
Back to Top
So excited for creepy season! And that means all new episodes of This Story is Nuts with a creepy twist the entire month! Also, keep an eye out for BONUS episodes! They will be sprinkled in for the entire month of October!
Today's Episode:
Roland T Owen would check into the President Hotel in Kanas City on a Wednesday afternoon in 1935. The man himself wasn't strange- he was anywhere between 20-35 years of age, had dark hair, a noticeable scar, and a cauliflower ear.
The bellhop would notice that Roland hadn't brought any luggage - and only carried a few personal items- items he would remove from his pockets when he arrived in his room. A housekeeper would also note Roland's behavior as slightly odd as he seemed to prefer to stay in his dimly lit room- keeping mostly to himself except for the strange man who visited his room- the man with the gruff voice- who Roland was heard arguing with some time later.
Even though his actions as he entered the hotel were strange- the craziest part of this story was when Roland T Owen would end up dead- brutally murdered in fact, only three days after he had checked into the hotel room.
It is a story that 86 years after it happened still gives people goosebumps. A story with very few answers and tons of questions- questions like what really happened in room 1046?

Want to discuss this case? Join the Facebook group: facebook.com/thisstoryisnutspodcast

Have a story or story suggestion: thisstoryisnuts@gmail.com