Your changes have been saved
All Audio Friends at the Table 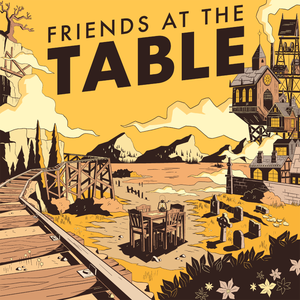 Sangfielle 29: Hark! The Citadel Beneath Pt. 2

This episode carries content warnings for imprisonment, forced starvation, human body parts used as tools, bones breaking through skin, unwilling bodily transformation, and bodily disfigurement. With the party of Open Gates off to a start above, the Blackwick Group’s Es, Marn, and Pickman begin to d
Category: Fiction
Publish Date: Oct 07, 2021
Tagged in this Audio:
More
Jump to Full Description
Snippets are a new way to share audio!
You can clip a small part of any file to share, add to playlist, and transcribe automatically. Just click the to create your snippet!
Snippets: Clips of Sangfielle 29: Hark! The Citadel Beneath Pt. 2 that people like

There are currently no playlists containing this audio.
Add this audio track to one of your playlists
Add to Playlist
Up Next
Full Description
Back to Top
This episode carries content warnings for imprisonment, forced starvation, human body parts used as tools, bones breaking through skin, unwilling bodily transformation, and bodily disfigurement. With the party of Open Gates off to a start above, the Blackwick Group’s Es, Marn, and Pickman begin to delve into the Interred Citadel of Callix, The Aquiline Marquis. Somewhere, there in the dark, Chine claws their way towards freedom.  But before he can be free, and before anyone can return home to Blackwick, there is much work to be done in the decrepit ruins below… This week on Sangfielle: Hark! The Citadel Beneath Pt. 2 The Almanac of the Heartland Rider Places Sapodilla: One of, if not the, largest city inside of the walls of Concentus. Sapodilla rests on the western shore of the vast lake that takes up much of southeastern Sangfielle, and prizes itself as the rare hub of culture in the bloodfields. In recent years, the powerful witch hunting organization called the Glim Macula has grown in power there, owing to the city’s focus on furthering “civilization.” Facts and Figures Dyre Ode (he/they): When an agent of the almanac pressed this mysterious, masked figure for more information about him, they only repeated their name, as if to ensure we’d print it right, adding “Dyre with Y but Ode as you’d like, a poem said in praise or a debt gone unpaid. It bothers me little, how you spell that name.” The Blackwick Group first encountered this myterious figure during their investigation into Roseroot Hall, where they helped him recover his skull. Emma Serchilde (she/her): One of the most successful investigators in Glim Macula’s history, Serchilde made her name ferreting out a group of heritrixes who allegedly served a god of slaughter. Where other witch hunters lean on deductive reasoning or evidence collection, Serchilde’s technique is simple: Intimidate witnesses through sheer force of will, using her loyal underlings--Janis, Aztel, and Nelzo--if it becomes necessary to prove that silence will be met with blood. Which isn’t to say that she’s afraid to get her own hands dirty. William Blick (he/him): Head of the Macula’s Honorguard, once a ceremonial unit with ties to the rituals of Sapodilla’s liberation, now little more than a bunch of door-kicking bullies. Felix Hollowfield (he/him): In many ways, brilliant inventor Felix Hollowfield is the reason for the recent surge in Glim Macula activity. Though the group has stalked the streets of Sapodilla for decades, it was Hollowfield’s collection of tools that both allowed the Macula to face down truly powerful supernatural foes and put a deep and singular fear in the hearts of Sapodillans. His weapons reveal the hidden, nullify the mystical, and ground the transcendent. Where could he have found such ideas as these? Alaway (varies): Last seen as the waxy, vampiric minister of Yellowfield, Regan, whose generations-long study of technology led him to dream of (and work towards creating) "The City of Lights," a place of flameless fire, energetic implements, and the safety and freedom to live as one wants. Disposed of, for now at least. But the dream yet lives. Mabriella du Feza (she/her): Among the Glim Macula, it is said that Mabriella du Feza is an accomplished interrogator, brilliant scholar, and malicious commander. What goes unsaid, because it is not widely known, is her role as a ‘liaison’ from another, even more sinister organization. Organizations The Shape Knights: It took people with clear minds, great ingenuity, and implacable spirit to face down and defeat one of the living trains of Sangfielle. In the time since, they’ve crafted armor from their slain foe, and with that have come to be experts of all things train. They herd, they breach, they redirect. But they haven’t yet killed a second. Hosted by Austin Walker (@austin_walker) Featuring Janine Hawkins (@bleatingheart), Ali Acampora (@ali_west), Jack de Quidt (@notquitereal), and Andrew Lee Swan (@swandre3000) Produced by Ali Acampora Music by Jack de Quidt (available on bandcamp) Text by Austin Walker Cover Art by Craig Sheldon (@shoddyrobot)
Up Next
Popular Playlists
Best Yoga Podcasts: Listen & Learn New Poses Sour Shoe's Greatest Moments on The Howard Stern Show Listen to: Top 15 Funniest Barack Obama Quotes 9 Game Design Podcasts Every Game Designer Needs to Hear 7 Podcast Episodes About The Golden State Killer That Will Keep You Up at Night David Parker Ray & Shocking Audio of the Toy Box Killer You Need to Hear Best UFO Podcasts That Will Abduct Your Mind Controversial Joe Rogan Experience Episodes Audio Wack Packer Beetlejuice Best Moments on The Howard Stern Show Best NoSleep Podcast Episodes To Terrify You Sexy ASMR Audio to Turn You On
Popular Categories
ASMR Business & Tech Cannabis Fashion & Beauty Gaming History Home & Garden Kids & Family Spirituality Travel
Add to playlist
New playlist