Your changes have been saved
All Audio ‎The Daily Gardener 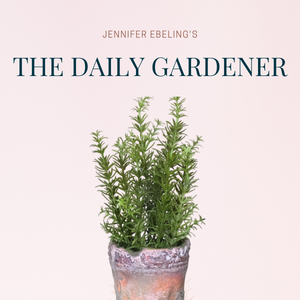 Today in botanical history, we celebrate a British Spy/American Farmer, a social reformer and poet, and an American writer. We’ll hear an excerpt from a book written by the beloved Canadian writer Lucy Maud Montgomery. We Grow That Garden Library™ with a book about homestead life - from growing grea
Category: Home & Garden
Publish Date: Sep 24, 2021
Tagged in this Audio:
More
Jump to Full Description
Snippets are a new way to share audio!
You can clip a small part of any file to share, add to playlist, and transcribe automatically. Just click the to create your snippet!
Snippets: Clips of September 24, 2021 Fall Garden To-Dos, Metcalf Bowler, Frances Ellen Watkins Harper, Wilson Rawls, Lucy Maud Montgomery, Welcome to the Farm that people like

There are currently no playlists containing this audio.
Add this audio track to one of your playlists
Add to Playlist
Up Next
Full Description
Back to Top
Today in botanical history, we celebrate a British Spy/American Farmer, a social reformer and poet, and an American writer. We’ll hear an excerpt from a book written by the beloved Canadian writer Lucy Maud Montgomery. We Grow That Garden Library™ with a book about homestead life - from growing great produce to canning and preserving. And then we’ll wrap things up with a look back at Minnie Hite Moody’s garden column from this day in 1980. She made a bouquet of weeds and then wrote about it.   Curated News The Complete Fall Garden Checklist | Garden Therapy | Stephanie Rose   Important Events September 24, 1789 Death of Metcalf Bowler, British-American merchant, and politician. As a young man, Metcalf came to America with his father. He successfully marketed a local apple known as the Rhode Island Greening Apple as part of his business. The apple later became the official state fruit of Rhode Island. A gentleman farmer, Metcalf himself was an avid horticulturist, and he was purported to have the most beautiful garden in the state. Metcalf was a successful merchant until the revolutionary war, which ruined him financially. In the 1920s, after stumbling on letters and examining handwriting, historians accidentally learned Metcalf had spied for the British. His love of nature may have inspired his code name: Rusticus. After the war, Metcalf wrote a book called A Treatise on Agriculture and Practical Husbandry(1786). Metcalf, the spy, sent a copy to George Washington, who wrote him back and tucked the copy away in his library.   September 24, 1825  Birth of Frances Ellen Watkins Harper, African-American suffragist, social reformer, abolitionist, writer, and poet. Her famous quote is, “we are all bound up together in one great bundle of humanity.” Her writing was mostly dedicated to her work for justice, but occasionally she would write about nature. Here’s an excerpt from her poem The Crocuses: Soon a host of lovely flowers  From vales and woodland burst;  But in all that fair procession  The crocuses were first.    September 24, 1913  Birth of Wilson Rawls, American writer. His embarrassment caused him to burn his manuscripts so his fiancee, Sophie, wouldn’t see them. Later she implored him to re-write one of the five stories from memory, which resulted in Where the Red Fern Grows (1961). The red fern was not an actual plant, but it served as the centerpiece of the novel. In the book, Wilson wrote, I had heard the old Indian legend about the red fern. How a little Indian boy and girl were lost in a blizzard and had frozen to death. In the spring, when they were found, a beautiful red fern had grown up between their two bodies. The story went on to say that only an angel could plant the seeds of a red fern and that they never died; where one grew, that spot was sacred.   Unearthed Words There were several things concerning which Miss Cornelia wished to unburden her soul. The funeral had to be all talked over, of course. Susan and Miss Cornelia thrashed this out between them; Anne took no part or delight in such ghoulish conversations. She sat a little apart and watched the autumnal flame of dahlias in the garden and the dreaming, glamorous harbor of the September sunset. Mary Vance sat beside her, knitting meekly. Mary’s heart was down in the Rainbow Valley, whence came sweet, distance-softened sounds of children’s laughter, but her fingers were under Miss Cornelia’s eye. She had to knit so many rounds of her stocking before she might go to the valley. Mary knit and held her tongue but used her ears. “I never saw a nicer-looking corpse,” said Miss Cornelia judicially. “Myra Murray was always a pretty woman—she was a Corey.” ― Lucy Maud Montgomery, Rainbow Valley   Grow That Garden Library Welcome to the Farm by Shaye Elliott This book came out in 2017, and the subtitle is How-to Wisdom from The Elliott Homestead. Shaye lives with her family in the Pacific Northwest. She’s the founder of the blog, The Elliott Homestead. She is a beekeeper, gardener and enjoys preserving a variety of foods for the winter larder. This book is truly a welcome to the Elliott Farm, and Shaye shares everything she’s gleaned about growing the good food right in her own backyard. Shaye teaches a ton in this book - how to harvest organic produc
Up Next
Popular Playlists
Best Yoga Podcasts: Listen & Learn New Poses Sour Shoe's Greatest Moments on The Howard Stern Show Listen to: Top 15 Funniest Barack Obama Quotes 9 Game Design Podcasts Every Game Designer Needs to Hear 7 Podcast Episodes About The Golden State Killer That Will Keep You Up at Night David Parker Ray & Shocking Audio of the Toy Box Killer You Need to Hear Best UFO Podcasts That Will Abduct Your Mind Controversial Joe Rogan Experience Episodes Audio Wack Packer Beetlejuice Best Moments on The Howard Stern Show Best NoSleep Podcast Episodes To Terrify You Sexy ASMR Audio to Turn You On
Popular Categories
ASMR Business & Tech Cannabis Fashion & Beauty Gaming History Home & Garden Kids & Family Spirituality Travel
Add to playlist
New playlist