Your changes have been saved
All Audio English Speeches | Learn English

Start Time: 00:26 End Time: 03:33
October 2019 - Jennifer Aniston speaks of how she always felt strong, but never powerful. It wasn't until "Friends" became popular that she realized that her voice mattered and she could use it to help others.
Category: History US History
Publish Date: Mar 07, 2021
Snipped By:
Share 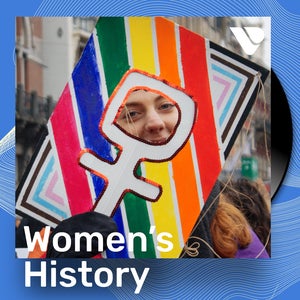 Best Speeches in Honor of Women's History
01:16:03 2/27/21 9 audios
Up Next
Full Description
Back to Top
October 2019 - Jennifer Aniston speaks of how she always felt strong, but never powerful. She recalls once being excused from the dining table because she "didn't have anything interesting to add to the conversation," and feeling like her voice was meaningless. It wasn't until "Friends" became popular that she realized that her voice mattered and she could use it to help others.
Transcripts
Back to Top
I mean, you would think after 30 years of being in this industry, getting up here would be easy. And, uh, it's not. It's terrifying. Um, it's not that often we are surrounded by people who found their voice and are using it and using it to hold people up and bring people together. And that, to me, is true power. I mean, it's funny because I've never you know, I've never actually thought about myself as powerful. I mean, strong, yes, but powerful. Not, um, it's a It's a distinction I've actually been thinking a lot about lately because the word power, um, and its counterpart abuse of power keeps coming up in light of what is happening in our country. Um, in our in our industry, a rebalancing of the scales, I guess you could say. And, uh, I've been thinking about my own relationship with that word with the word power which got me thinking about, um, my first. My early associations from, uh, my early associations with my own sense of power, something I believe comes from using our voice. And I remember the parental figures saying to me around the rather critical age of about 11 after a dinner party, um, that I was excused from the table because I didn't have anything interesting to add to the conversation. Ouch. And it's stuck with me. It's stuck with me like painfully worded sentences can. And if I'm being honest and I'm being honest because I'm 58 you know that comes with the territory, that's right, Yeah. So I carried that sentence with me into adulthood, and I always felt incredibly comfortable giving a voice to the words of others. But put me at a dinner table with strangers or at a podium like this, and I go right back to being 11 years old. This last. The last two years has made me think a lot about the messages that we send young kids little girls, especially how the things that we say and you can either build them up or it can tear them down and make them feel like maybe their voices don't matter. And it wasn't until friends took off that I started seeing myself in a different light. I started meeting all of these people who expressed to me how much the show meant to them, how it lifted their spirits during a bad breakup or or got them through an illness. And I was just so incredibly moved by that, and I began to change the way I thought about my own voice and what it meant to have a platform to use it.
Up Next
Popular Playlists
Best Yoga Podcasts: Listen & Learn New Poses Sour Shoe's Greatest Moments on The Howard Stern Show Listen to: Top 15 Funniest Barack Obama Quotes 9 Game Design Podcasts Every Game Designer Needs to Hear 7 Podcast Episodes About The Golden State Killer That Will Keep You Up at Night David Parker Ray & Shocking Audio of the Toy Box Killer You Need to Hear Best UFO Podcasts That Will Abduct Your Mind Controversial Joe Rogan Experience Episodes Audio Wack Packer Beetlejuice Best Moments on The Howard Stern Show 12 Best Episodes of the NoSleep Podcast to Keep You Up at Night Sexy ASMR Audio to Turn You On
Popular Categories
ASMR Business & Tech Cannabis Fashion & Beauty Gaming History Home & Garden Kids & Family Spirituality Travel
Add to playlist
New playlist