Your changes have been saved
All Audio Tiny Desk Concerts - Audio 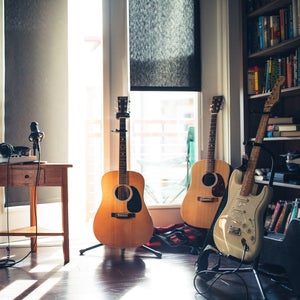 Best NPR Tiny Desk Concert Moments
53:39 2/3/21 12 audios
Up Next
Full Description
Back to Top
Breakout artist Chika anoints the Tiny Desk with her chapstick after flowing through her hit song "Industry Games." Although she's only been on the hip-hop scene for one year, Chika snagged a spot on XXL's 2020 Freshman Class and was nominated for the Grammy Award for Best New Artist.
Transcripts
Back to Top
Yeah. Oh, okay. *** be paying your industry games. Yeah, wrapping, but they're not in love with it. Think it's a shame? Yeah. I'm about to pop up some other shit. I think it's a game they don't control. What island? Royal Flush, ***. The cards in my hand. I'm trying to stack all these and all of my idols His friends came to the fight with sometimes. Yeah, well, I let up. It depends. Yeah. Been through the struggle. I don't run from trouble. No breaking. I just wanna I'm just gonna put me defeated. I'm hella conceded. I right on that. Be like a bends. Yeah, I am the one from the stories that got you excited. Rhythmic flow is ignited. I was so easy for her to recite. It can do this shit while I'm gonna because I write it or try these *** be so good divided I let him in, but they'll never be quite an invitation. Is just inspiration. If you feel like taking, just be sure that you cited I'm a tribute to go with a different All right. I admit division had to start with the supporters. Had a premonition, had to get this shit in order. And I'm gonna take your dog for a while. What supported? I've been counted out for too damn long. Like I couldn't see the crown with too damn songs all up in the booth with no home training. Give me a counter to dance on. Yeah, *** be playing industry games. Yes. Wrapping, but they're not in love with. Think it's a shame I'm about to pop up some other shit. Think it's a game they don't control what I land. I'm fresh in that bitch. And you know that. Don't take my body to show that Get in the booth on the E. I don't hold back. Fucking the game there to send me the whole bag, trading their lyrics and shit. I ain't for that. You need to stand with the plan of the fucking name and I want more that I'm the antithesis, Making sure there was just a phase where they pray for the show back store that kill them with kindness and sound. Normal time this around. And there's a cumulus. You know, the grab. They say they don't get their what's fucking in. Brown Don't need a break in the diamonds and mouth too much The asteroid queen of the South. My shit is important. They shopping at Ralphs knows where there's a decent I'm making my rounds *** watching me, maybe flocking They say they're trying to slap me. I can hear the snake status and trying to break my e know about Thio. Yeah, I just tell them. Tell them Wait, I got too much on my plate and I know that I'm a side e could make it whole official I'm a blow My whistle is a game I decided, T Oh, yeah, yeah *** be playing your industry game wrapping but they're not in love with it I think it's a shame I'm not the proper some other shit. I think it's a game they don't control what I land Royal flush negative cards in my hand. Thanks so much. Really relax like e performing. I'm sorry for laughing the middle. We I love this song. It is hilarious to me that I always say Titus around and they say hottest around and we talked about this all day yesterday, and it's hysterical to me like it is something I laugh about at all times. and so that was great. That's the direct for us. They don't even know they don't even know. But I loved it. I loved everything about it. Like that's true. That's true to the game. Eso everyone always brings, like, nice things a tiny desk and like, they have lights and all these, like settings and things, which I think is dope. I didn't bring anything as you see, or so you thought I actually I brought this chap stick. I'm gonna place that. Okay? Fuck anybody who underestimated me that no one else is gonna have that in there, so
Up Next
Popular Playlists
Best Yoga Podcasts: Listen & Learn New Poses Sour Shoe's Greatest Moments on The Howard Stern Show Listen to: Top 15 Funniest Barack Obama Quotes 9 Game Design Podcasts Every Game Designer Needs to Hear 7 Podcast Episodes About The Golden State Killer That Will Keep You Up at Night David Parker Ray & Shocking Audio of the Toy Box Killer You Need to Hear Best UFO Podcasts That Will Abduct Your Mind Controversial Joe Rogan Experience Episodes Audio Wack Packer Beetlejuice Best Moments on The Howard Stern Show Best NoSleep Podcast Episodes To Terrify You Sexy ASMR Audio to Turn You On
Popular Categories
ASMR Business & Tech Cannabis Fashion & Beauty Gaming History Home & Garden Kids & Family Spirituality Travel
Add to playlist
New playlist