Your changes have been saved
All Audio The Everything '80s Podcast

Snippet of The Everything '80s Podcast: Ghostbusters - Movie Review 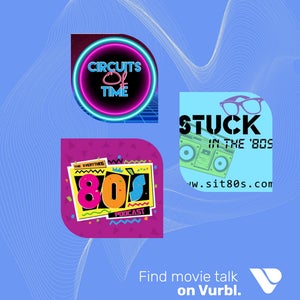 The Best Podcasts About 80s Blockbusters
01:05:18 2/5/21 15 audios
Up Next
Full Description
Back to Top
How much did the Ghostbusters movie cost to make? How did the cast really disintegrate the Stay Puft Marshmallow Man? In this episode of The Everything '80s Podcast, host Jamie Logie flexes some serious movie buff knowledge in his rapid-fire round-up of Ghostbusters trivia.
Transcripts
Back to Top
So as far as behind the scenes, things go. There's so much that happened with this movie. Uh, like just starting off the bat. Some of the original, as good as the cast members were some people also considered to be in the movie or Julia Roberts, but also John Candy, which would have been amazing and, I think, worked perfect. It was pretty high budget. It was 25 to $30 million for what was, you know, technically a comedy, even though it was a science fiction movie. Still a pretty high price tag. But it ended up making quite a lot of money upwards of almost 300 million when if you that's an 84. So if you convert it for today it was around 775 million, which is again pretty amazing, um, again it like there was a real rush to get this movie done, and they only had a few takes on every scene to get the thing done in time, and it was filmed in around five months. But the editing took like six months to Dio. So a lot of that's why a lot of there's a good energy and the acting and the performances because you're getting like their initial take. And they're like they're sort of first readings off the lines. Interesting thing with Slimer that he took six months to design and cost around 300 grand. Also interesting. Who's never called Slimer specifically in the movie. We think of him a slimer because of the real Ghostbusters cartoon where he got that name. Another interesting thing because of movie was made by Dan Ackroyd. It was Slimer was partly based on John Belushi as a tribute to him. The end of the movie when they disintegrate, the Marshmallow Man and all the marshmallows falling on the crowd was actually shaving cream, and they were dumping. So much was actually like hurting a lot of people, the the one scene where they are running through Rockefeller Center, Remember, like with Bill Murray and actually forget who else is in that scene. But they're actually getting chased by real security. So that was a really seen. The thing is, you think that they film Saturday Night Live at Rockefeller Center. You think that security guard would know who the hell Dan Ackroyd and Bill Murray were like the legends of that show Interesting. With the production of the movie, there was no faith in this thing. And like, from the agents of the actors to the different chairman from the studios, uh, different. Everyone thought they were gonna lose their shirts over this thing. And the fact that had a budget of upwards of $30 million was absolutely insane. The one thing they did that was really smart was they started an early advertising campaign, and the big thing, I think that helped it. And to me, especially from the kids perspective, was the logo, you know, the the red Circle with line across it with the white ghost coming out of it, the very cartoony look. And that was helpful because that's how they first tried to drive interest to the movie, and that logo was very recognizable. So in the lead up to the movie, a lot of people instantly knew what it was because of that iconic image and again with say, like from a kid's perspective, you knew it wasn't a cartoon movie. But the fact that used a cartoon ghosts in this like no ghost symbol made it more appealing to kids as opposed to again like, you know, nightmare on Elm Street or The Shining, which is clearly not a kids movie. Now that Ghostbusters is primarily kids movie, but it does have that appeal.
Up Next
Popular Playlists
Best Yoga Podcasts: Listen & Learn New Poses Sour Shoe's Greatest Moments on The Howard Stern Show Listen to: Top 15 Funniest Barack Obama Quotes 9 Game Design Podcasts Every Game Designer Needs to Hear 7 Podcast Episodes About The Golden State Killer That Will Keep You Up at Night David Parker Ray & Shocking Audio of the Toy Box Killer You Need to Hear Best UFO Podcasts That Will Abduct Your Mind Controversial Joe Rogan Experience Episodes Audio Wack Packer Beetlejuice Best Moments on The Howard Stern Show 12 Best Episodes of the NoSleep Podcast to Keep You Up at Night Sexy ASMR Audio to Turn You On
Popular Categories
ASMR Business & Tech Cannabis Fashion & Beauty Gaming History Home & Garden Kids & Family Spirituality Travel
Add to playlist
New playlist