Your changes have been saved
All Audio World War II Chronicles

Start Time: 01:39 End Time: 02:27
Hear the propaganda which was used to encourage the participation of women in the workforce, both on the homefront and production lines.
Category: History
Publish Date: Mar 24, 2021
Snipped By:
Share
station description I love working with creative people to help them produce their best work. Listen to... read more 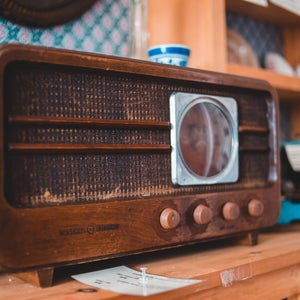 Defining Radio Broadcasts of the 1940s
01:04:51 3/24/21 8 audios
Up Next
Full Description
Back to Top
Hear the propaganda which was used to encourage the participation of women in the workforce, both on the homefront and production lines.
Transcripts
Back to Top
a big 90 millimeter anti aircraft gun is a powerful, noisy, heavy guns. Working with it is hard, strenuous work by pre war standards. These jobs are worked for men only. But these ideas and phrases are peacetime ideas, outmoded by the rush of an entire nation to arms. In 1940 the percentage of women in the U. S workforce was about 24% 1945 the height of wartime employment. The percentage of women in the workforce was nearly 35%. Despite layoffs at war's end, the number of women in the workforce never again dropped to pre war levels. American women had gone to work for good. I'm in Herlihy. Join me next time for World War Two chronicles.
Up Next
Popular Playlists
Best Yoga Podcasts: Listen & Learn New Poses Sour Shoe's Greatest Moments on The Howard Stern Show Listen to: Top 15 Funniest Barack Obama Quotes 9 Game Design Podcasts Every Game Designer Needs to Hear 7 Podcast Episodes About The Golden State Killer That Will Keep You Up at Night David Parker Ray & Shocking Audio of the Toy Box Killer You Need to Hear Best UFO Podcasts That Will Abduct Your Mind Controversial Joe Rogan Experience Episodes Audio Wack Packer Beetlejuice Best Moments on The Howard Stern Show Best NoSleep Podcast Episodes To Terrify You Sexy ASMR Audio to Turn You On
Popular Categories
ASMR Business & Tech Cannabis Fashion & Beauty Gaming History Home & Garden Kids & Family Spirituality Travel
Add to playlist
New playlist